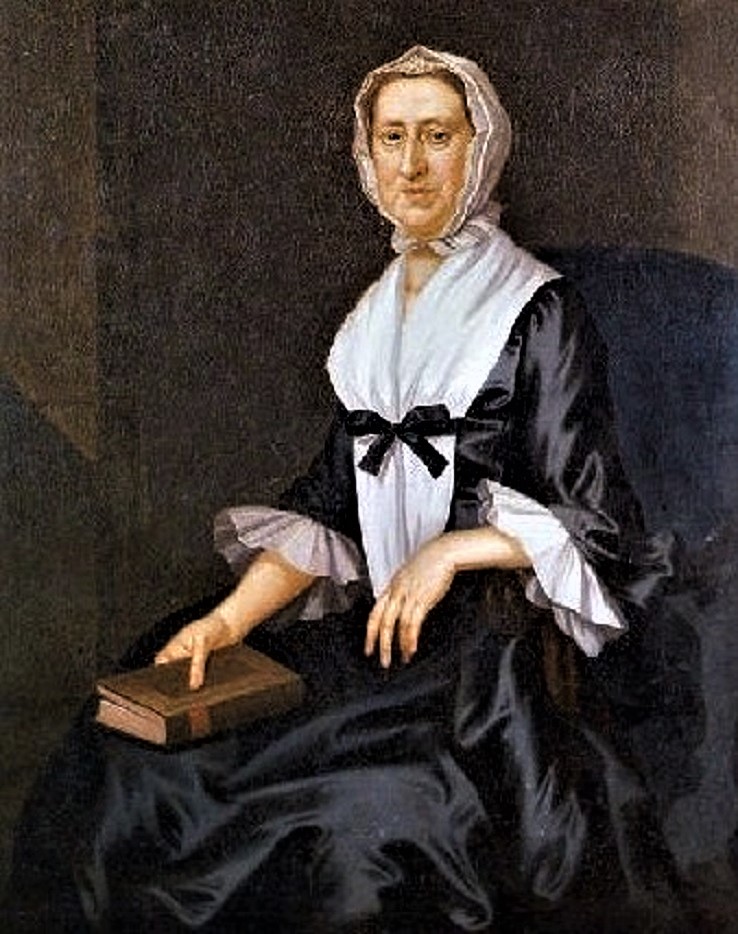 
Catharina Van Brugh Livingston (1684-1756) grew up in Albany where her father Pieter Van Brugh (1666–1740), was the Mayor of Albany, New York from 1699 to 1700 & from 1721-23. She was the daughter of Peter Van Brugh & Sara Cuyler. Her grandfather, Johannes Pieterse van Brugh (1624–1697), was one of the early settlers of New Netherland & was prominently connected with the Dutch West India Company. As the only heir of wealthy & advantaged parents, in September 1708 nineteen-year-old Catharina was married to Philip Livingston (1686–1749), the 2nd Lord of Livingston Manor, the eldest son of Alida Schuyler (1656–1727) & Robert Livingston the Elder (1654–1728). Three months later, the 1st of Catharina's  children was baptized in the Albany Dutch church.  By the middle of the 18C in British Colonial America, parental influence over the choice of a spouse had sharply declined, & there was a sudden upsurge in the mid-18C of brides who were pregnant when they got married. In the 17C, fathers - supported by local churches & courts - exercised close control over their childrens’ sexual behavior & kept sexual intercourse prior to marriage at extremely low levels. The percentage of women who bore a 1st child less than 8 1/2 months after marriage was below 10%. By the middle of the 18C, the number of pregnant brides had escalated to over 40%.

A year or two younger than most Albany brides, her family was larger than most with the last child born in 1733, when Catharina was 43-years-old.  These Livingstons moved into the landmark Livingston home on the Elm Tree Corner. For several decades Catharina & Philip were Albany mainstays with their numerous offspring growing up & succeeding to places of prominence throughout the colonies. As Philip's public & personal business took him more to New York City & to the Manor, Catharina managed the family Albany home & its operation.  One of their sons was Philip Livingston (1716–1778), a signer of the United States Declaration of Independence, & another was William Livingston (1723–1790), a signer of the United States Constitution & the 1st Governor of New Jersey. Their 40-year marriage ended when Philip Livingston died in New York City in February of 1749.  Catharina inherited substantial property. She filled the years that followed with family & friends from Albany to New York. She died suddenly on February 20, 1756 while visiting in New York City. She was in her 67th year & was mourned by her children as the "best of mothers." Other family members called her "a good woman" & mentioned her "sweetness of temper & good sense."
Posted by Barbara Wells Sarudy at 4:00 AM