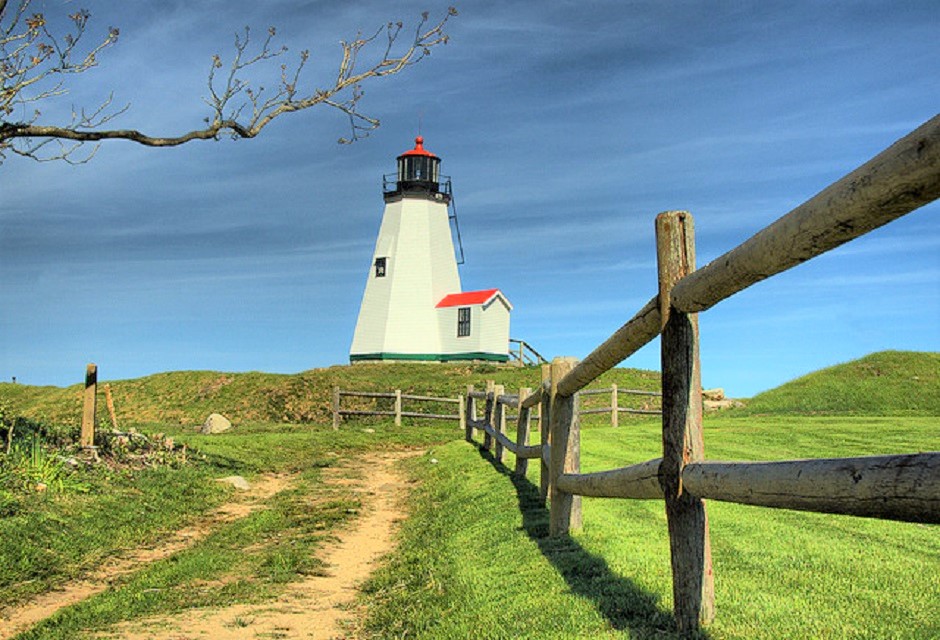 The Gurnet, a 27 acre peninsula forming the northern boundary of Plymouth Bay, is located a few miles northeast of Plymouth Rock. The Pilgrims knew the land as “the gurnett’s nose,” apparently naming the area for similar headlands in the English Channel, where the gurnet fish flourished along Devonshire’s shores. When Samuel de Champlain arrived in 1606, to map the Gurnet and Clark’s Island, he found thick pine forests & Native Americans fishing for cod using lines made of tree bark with wooden fish hooks to which a spear-shaped bone was attached.

The Gurnet became part of Plymouth on January 7, 1638. By the 1770s, 75 fishing vessels were based in the area, and at one point, Duxbury was one of the world’s leading shipbuilding enters. Under the direction of the Massachusetts Legislature, the first Plymouth Lighthouse, a wooden keeper’s dwelling measuring 15 by 30 feet, equipped with a lantern at each end of its roof, was completed in September 1768 at a cost of £660. The twin lights, exhibited at a height of 86 feet above the sea, distinguished the station from the single light used at Boston. 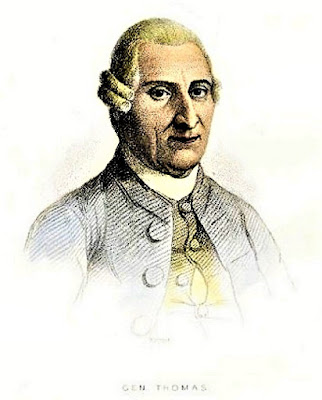 The lighthouse was built on land rented for 5 shillings a year from Dr John & Hannah Thomas. Hannah Thomas was born on April 20, 1731, in Middleborough, Plymouth, Massachusetts. She married Dr John Thomas in 1761.  Originally, the lighthouse built on their property had 2 towers which were first lit in 1769. Dr John Thomas was appointed the keeper of both lighthouses, since the towers were constructed on his land.  John, a surgeon, the 1st keeper served, until he joined the Continental Army. He recruited a regiment of volunteers from Plymouth County to help repel the British in the Siege of Boston, & then served as a major general leading troops in Quebec, where he died of small pox on June 2, 1776. Along with raising their 3 children, his widow Hannah took over John’s lighthouse post, making her the first woman lighthouse keeper in America.

It is said that in 1776, after Fort Andrew was erected at Gurnet Point, the H.M.S. Niger reportedly sailed around the Gurnet toward Plymouth Harbor, exchanging fire with the fort’s 6-cannon battery and, many believe, destroying one of the lighthouse beacons in the process.

Plymouth’s worst shipwreck occurred in 1778, when the American privateer General Arnold was trapped in a blizzard less than a mile from Plymouth Light. Choosing to forego the risk of entering Plymouth’s inner harbor without a pilot, the captain dropped anchor hoping to ride out the storm. As the gale rose to hurricane force, the vessel drug anchor running aground on White Flats. Before residents of the Gurnet could construct a causeway over the ice to reach the stranded vessel, 72 of the its crew of just over 100 froze to death in view of the light.

After the American Revolution, the lighthouse was refurbished & put back in service with Hannah Thomas as keeper.  The prevailing work at a lighthouse included tending the light; cleaning lighthouse instruments & buildings; & keeping records of supplies; all traditional women’s work. Women had long been associated with maintaining the lights & fires within a home. This female task was noted in ancient Greece where the goddess “Hestia stays at home on Mount Olympus to keep the fires alight.” During the Early American Republic, women continued the practice of maintaining fires for cooking & warmth, as well as candles & lamps for illumination.

Hundreds of American women have kept the lamps burning in lighthouses since Hannah Thomas tended Gurnet Point Light from 1776-1786 in Plymouth, MA, staying at their posts for periods ranging from a few years to half a century. Caring for a lighthouse was a continuous occupation, making it necessary for the keeper to live where she worked. Thus, the light station was not just a government job, but also a way of life.  Most of these women served in the 19C, when the keeper lit a number of lamps in the tower at dusk; replenished their fuel or replaced them at midnight; and every morning polished the lamps & lanterns to keep their lights shining brightly.

Several of these women were commended officially for their courage in remaining at their posts through severe storms & hurricanes. The power of ferocious storms & rushing water affected the physical structures, & took a heavy toll on the keeper, at times causing the death of the keeper or a family member. On 13 March 1832, a ferocious ice sweeping down Hudson River during spring breakup destroyed the Stuyvesant Light. Keeper Volkert Witbeck & some family members were able to survive, but Elizabeth, aged 11, and Harriet, aged 13, perished.

A few female lighthouse keepers went to the rescue of seamen, when ships capsized or were wrecked. 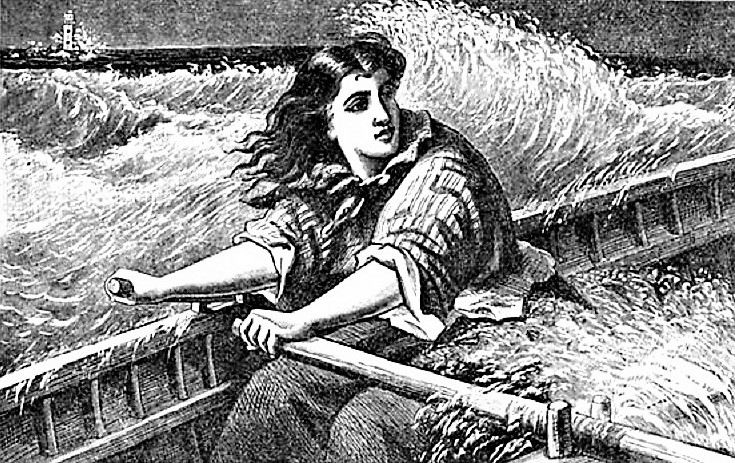 Ida Lewis (1842 –1911) was an American lighthouse keeper noted for her heroism in rescuing people from the seas.

Hannah Thomas, who had served since 1776, hired Nathaniel Burgess (or Burges) to act as keeper in 1786, and that same year a coasting sloop traveling from Boston to Plymouth struck a sand bar near the Gurnet. Two of the seamen from the vessel trudged 7 miles through a bitter snowstorm to reach Gurnet Lighthouse. Keeper Burgess fed & warmed them beside the fire, dispatching his assistant, perhaps Hannah’s son John, to bring in the rest of the crew.

In 1790, the light was ceded to the U.S. government, & Hannah Thomas' son John Thomas took over as keeper. His salary of $200 per annum was lower than at other lighthouses, because the Gurnet was deemed an acceptable place to live with ample fishing & land with good soil to garden. 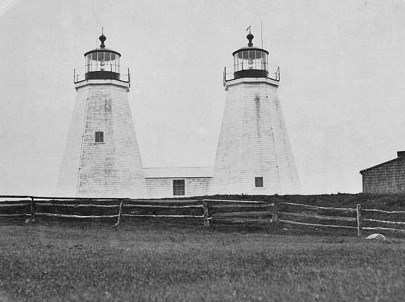 1843 photo of the twin Plymouth Lights. Photo from US Navy

After the lighthouse was completely destroyed in a fire on July 2, 1801, the merchants of Plymouth and Duxbury funded the construction of a temporary beacon. On April 6, 1802, Congress voted to repay them $270 and appropriated $2,500 to rebuild the lighthouse on the Gurnet. The Thomas family was paid $120 for the land on which twin, 22' tall lighthouses, spaced 30 feet apart, were built in 1803.

During the late 18C - early 19C, the US federal lighthouse service furnished some provisions, but almost all keepers found it necessary to have a garden & some livestock. Kate Moore described in the New York Sunday World, in 1889, the extra care necessary for survival at Black Rock Harbor Light in Connecticut: "I had a lot of poultry & 2 cows to care for, & each year raised 20 sheep, doing the sheering myself - and the killing when necessary. You see, in the winter you couldn’t get to land on account of the ice being too thin, or the water too rough. Then in the summer I had my garden to make and keep. I raised all my own stuff, and as we had to depend on rain for our water, quite a bit of time was consumed looking after that." Kate’s family moved to the lighthouse in 1817, her father had a paralyzing stroke in 1819, & Kate kept the lighthouse functioning until his death in 1871, becoming the official head keeper from 1871-1878.
Posted by Barbara Wells Sarudy at 4:00 AM