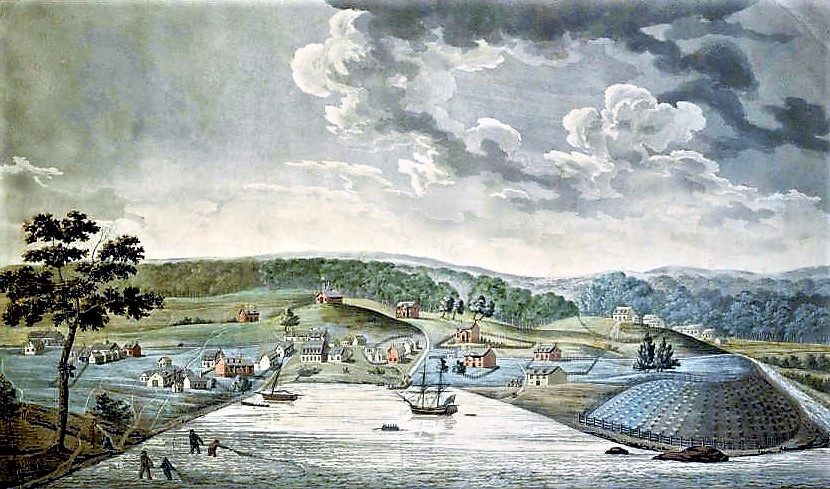 William Parks of Maryland establishes a printing press in Virginia.

Baltimore is founded in the Maryland colony.

Both men & women begin wearing white stockings, made of silk or cotton.

North Carolina Cherokee leaders visit London & confer with the king. They pledge friendship to the English & agree to return runaway slaves & to trade exclusively with the British.

1731
Benjamin Franklin (1706-1790) and members of his Junto Club found a circulating library in Philadelphia, the Library Company of Philadelphia.

Work is begun on building Independence Hall in Philadelphia.

The Spanish reverse a 1730 decision & declare that slaves fleeing to Florida from Carolina will not be sold or returned.

A theatrical company from London performs for the first time in New York City.

Georgia is the last of the thirteen English colonies to be settled. It is established not so much for economic opportunity, but to be a military barrier between Spanish-owned Florida & the Carolinas. It is also set up as a refuge for former prisoners & the poor. It also would prevent slaves escaping from South Carolina from reaching Florida, where they could gain their freedom. Charter of Georgia; June 9.

Slaves aboard the ship of New Hampshire Captain John Major kill both captain & crew, seizing the vessel and its cargo.

1733
The Molasses Act, passed by the English Parliament, imposes heavy duties on molasses, rum and sugar imported from non-British islands in the Caribbean to protect the English planters there from French and Dutch competition.

The first serious outbreak of influenza sweeps through New York City and Philadelphia; about three-fourths of the population is affected.

Quaker Elihu Coleman's A Testimony against That Anti-Christian Practice of MAKING SLAVES OF MEN is published.

Rebekah Chamblit (1706-1733) reportedly conveys A DECLARATION, DYING WARNING AND ADVICE OF REBEKAH CHAMBLIT. A YOUNG WOMAN AGED NEAR TWENTY-SEVEN YEARS, EXECUTED AT BOSTON SEPTEMBER 27TH. 1733. BEING THEN FOUND GUILTY OF FELONY, IN CONCEALING THE BIRTH OF HER SPURIOUS MALE INFANT, OF WHICH SHE WAS DELIVERED WHEN ALONE THE EIGHTH DAY OF MAY LAST, AND WAS AFTERWARDS FOUND DEAD... (See the Declaration on this blog.)

1734
John Peter Zenger, editor of the NEW YORK WEEKLY Journal, is imprisoned in New York for upholding freedom of the press. He is accused of libeling New York Governor William Cosby. In 1735, Zenger is acquitted when his attorney, Andrew Hamilton, says that the charges cannot be libelous because the accusations against Cosby were true. While Zenger is imprisoned, his wife continues to publish the newspaper.

The first opera performed in the colonies, “Flora,” opens in Charleston, South Carolina.

Women’s status in the colonies changes due to increasing wealth. Newspapers tell of runaway wives and elopements.

John Peter Zenger: A BRIEF NARRATIVE OF THE CASE AND TRYAL OF JOHN PETER ZENGER. Zenger explains the story of the court case that links his name to the notion of freedom of the press. Arrested for alleged libelous statements made in several issues of the New-York Weekly Journal in 1734, Zenger had been brought to trial in 1735. The jury found him not guilty, & the acquittal gained an important precedent for American freedom of the press

Under an English law Georgia prohibits the importation & use of black slaves. Georgia petitions Britain for the legalization of slavery.

Louis XV, King of France, declares that when an enslaved woman gives birth to the child of a free man, neither mother nor child can be sold. Further, after a certain time, mother and child will be freed.

Scots-Irish immigrants begin coming to North Carolina in large numbers, settling mainly in the Piedmont. Most are second-generation colonists moving south down the Great Wagon Road from Pennsylvania, Maryland, & Virginia, but a few come directly from Northern Ireland.

Ann Smith Franklin publishes "A BRIEF ESSAY ON THE NUMBER SEVEN." She is one of the first women printers in the American colonies, and the essay deals with the possible biblical significance of the number seven.

Elisabeth Mixer, daughter of Deacon John Mixer and Abigail Fiske who had married in Connecticut on 15 August 1695 and gave birth to Elisabeth on 30 December 1702, revealed AN ACCOUNT OF SOME SPIRITUAL EXPERIENCES AND RAPTUROUS AND PIOUS EXPRESSIONS OF ELISABETH MIXER…OF WHAT GOD HAD DONE FOR HER SOUL, IN ORDER TO HER ADMISSION INTO THE CHURCH OF CHRIST IN ASHFORD.

1737
The first colonial copper coins are minted, also in Connecticut.

Thomas Penn, son of William, attempts to claim more lands from the Minisink tribe of the Delaware. The original agreement, made by William Penn , was that as much land would be claimed as a man could walk in a day & a half, understood by all to mean 30 miles. Thomas Penn, wanting to expand further west, hires two trained athletes to "walk" along newly cut paths & assists them with boats across streams. The "walkers" cover sixty miles & this incident becomes known as The Walking Purchase, the beginning of the end for the Quaker peace policy in the colony

Mail is first carried regularly through North Carolina on the post road that runs from Boston to Charlestown, S.C.

John Wesley (1702-1791) and George Whitefield (1713-1779) immigrate to Savannah, Georgia as leaders of the “Great Awakening.” Whitefield's sermons promote the "Great Awakening" throughout the 1740s. One of the thousands impressed by his eloquence is Benjamin Franklin, who writes in his Autobiography, "I happened soon after to attend one of his Sermons, in the Course of which I perceived he intended to finish with a Collection, & I silently resolved he should get nothing from me. I had in my Pocket a Handful of Copper Money, three or four silver Dollars, and five Pistoles in Gold. As he proceeded I began to soften, and concluded to give the Coppers. Another Stroke of his Oratory made me asham'd of that, and determin'd me to give the Silver; & he finish'd so admirably, that I empty'd my Pocket wholly into the Collector's Dish, Gold and all." Other preachers in this movement included Theodore Frelinghuysen of the Dutch Reformed Church, Gilbert Tennent (Presbyterian), and Jonathan Edwards.

Imprint about Patience Boston (1711-1735) was published in Boston by S. Kneeland and T. Green, A FAITHFUL NARRATIVE OF THE WICKED LIFE AND REMARKABLE CONVERSION OF PATIENCE BOSTON ALIAS SAMSON; WHO WAS EXECUTED AT YORK, IN THE COUNTY OF YORK, JULY 24TH. 1735. FOR THE MURDER OF BENJAMIN TROT OF FALMOUTH IN CASCO BAY, A CHILD OF ABOUT EIGHT YEARS OF AGE, WHOM SHE DROWNED IN A WELL.

1739
War of Jenkins' Ear: England declares war on Spain; border skirmishes erupt between colonists in South Carolina and Georgia and the Spanish in Florida.

A measles epidemic breakes out in Boston.

Violent uprisings by black slaves occur on three separate occasions in South Carolina. The Stono Rebellion refers to slaves in Stono, South Carolina, sacking & burning an armory & killing whites. The colonial militia puts an end to the rebellion before slaves are able to reach freedom in Florida.

Eliza Lucas Pinckney (c. 1722-1793) begins writing her journal. Her compiled letters and journal become the life chronicle of one of the leading women of the colonial era, a prominent South Carolina planter and mother of political figure Charles Pinckney (1757-1824). Not published until 1850, it reveals an intellectually curious successful 18th century businesswoman.