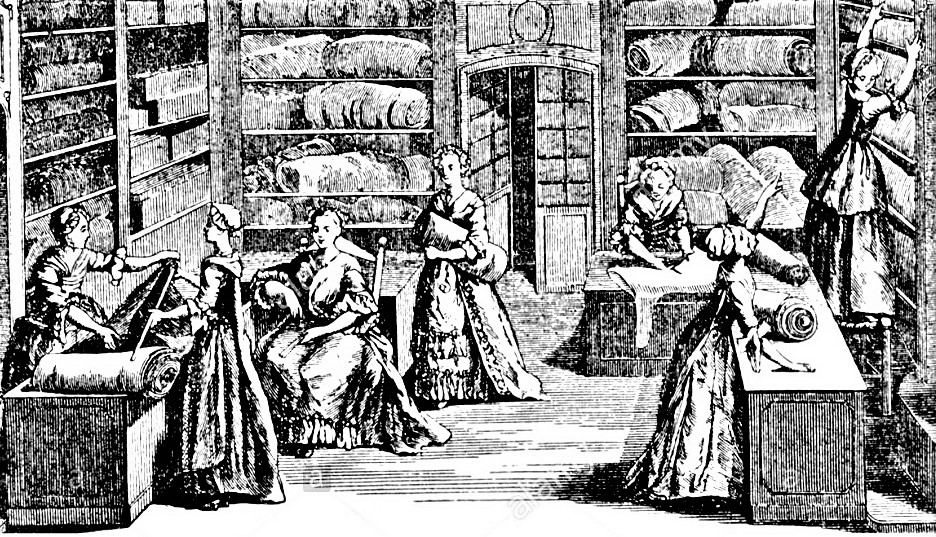 In the 1500s & 1600s, the millinery business involved shopkeepers who dealt in milanese (as in Milan, Italy) ware, like silks, ribbons, armor, swords & other Italian goods. Millinery, however, began to change its meaning as swords & armor fell out of fashion. The word also took on a new life as English retailing underwent a big shift in the mid-1600s. The Great Fire of London in 1655 had a lot to do with this change. Prior to the fire, trades were concentrated along certain streets. After the fire, trades intermingled in new shopping districts. Shopkeepers also began selling many goods & services in their stores, offering customers greater convenience & expanded choices. A milliner could carry possibly a thousand different goods, becoming the forerunner of the modern department store. At this point, the term “milliner” was tied to the Latin word "mille," meaning 1000.

The Colonial Williamsburg Foundation tells us that prior to the American Revolution, millinery shops were almost always a woman's business. Women had a place in 18C British American commercial life. Those who reached their majority & were not married could own property, buy & sell, sue & be sued, represent themselves in court, make contracts & perform other routine commercial & legal functions. In short, they had all the rights of men, but they did not have the privileges of voting or holding public office.

Milliners catered to the fashion needs of men, women, & children. In addition to being a trades-woman who made fashion accessories, the milliner was also a businesswoman who sold a wide range of fashionable imported goods. It was not uncommon for a milliner in the British American colonies, to advertise that she had just imported from London the very latest in mercery, haberdashery, jewelry, hosiery, shoes "and other items too tedious to mention." The millinery sold fabric, baby & children's clothes, hats & shoes, dolls, jewelry, tea pots, sugar, needles, thread, laces, liquor, lottery & theatre tickets, ribbons, hair pieces, medicines, books, games, & much, much more. A millinery store owner also needed to know about fashion & the intricacies of the clothing business. A well-informed entrepreneur might know about sewing, tailoring, gown making, laundrying, ironing & making & maintaining fine lace. 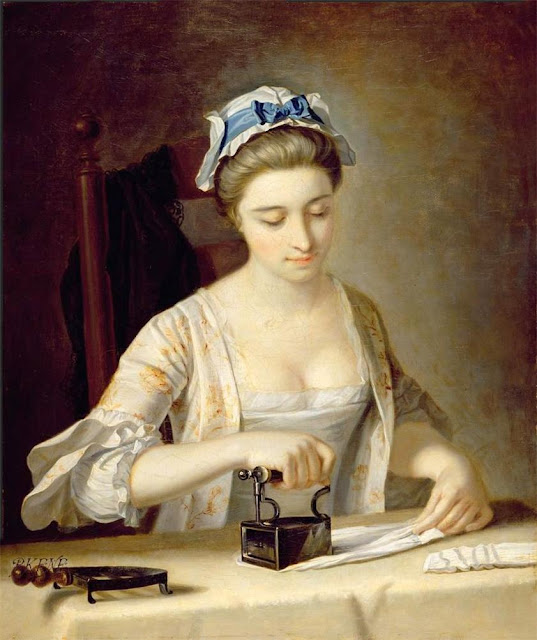 The other primary 18C woman's trade was that of mantua making – or gown making. On occasion, the apprenticeship for milliners also included learning the skills of mantua making. Independent of a millinery shop, the gown maker was on par with the tailor – both were skilled in cutting, fitting, & sewing but usually were not able to sell fabric to their customers. In the 18C, fabric accounted for the largest part of the cost of clothing. Mantua-makers specialized in making women's gowns. Not only did milliners sell fabric straight from the bolt, they also employed or contracted with  mantua makers who made dresses, jackets, & gowns for customers.

A mantua-maker was responsible for draping, cutting, & sewing the gown. It was possible for a gown to be "gotten-up" in the very latest fashion from London with 3 half-hour fittings in 7 days. From fabric sold in the shop, milliners would make items such as: shirts, shifts, aprons, neckerchiefs, caps, cloaks, hoods, hats, muffs, ruffles, & trim for gowns. The cost of any clothing varied depending on the type of fabric that was chosen. A gown made from wool, silk, or cotton cost more than one made from linen. The cost for the labor was less expensive than the material involved. The fabric was usually 80%-90% of the cost of the gown.

Clothing producers knew that one way to keep sales humming was to keep styles changing. Many British American colonists had an insatiable appetite for news, particularly fashion news, which reached America fairly quickly given the slow transportation of the day. In the early 1770s, Virginians learned about the latest styles through English newspapers & magazines. The news typically was 6 to 8 weeks old until it finally arrived from across the Atlantic, but it was welcome never-the-less.The whirl of fashion during the 1700s was endless & often contradictory. During the 18C, ladies' skirt styles changed five times. It was not unheard of for hat styles to change 17 times during a 2-year period. “Solomon in all Glory was not array'd like on of These,” wrote visitor Rev. Jonathan Boucher of upper class Virginians in 1759. “I assure you, Mrs. James, the common Planter's Daughters here go every Day in finer Cloaths than I have seen content you for a Summer's Sunday. You thought (homely Creatures as your are) my Sattin Wastecoat was a fine best, Lord help You, I'm noth'g amongst the Lace & Lac'd fellows that are here. Nay, so much does their Taste run after dress that they tell me I may see in Virginia more brilliant Assemblies than I ever c'd in the North of Engl'd, & except Royal Ones P'rhaps in any Part of it.” 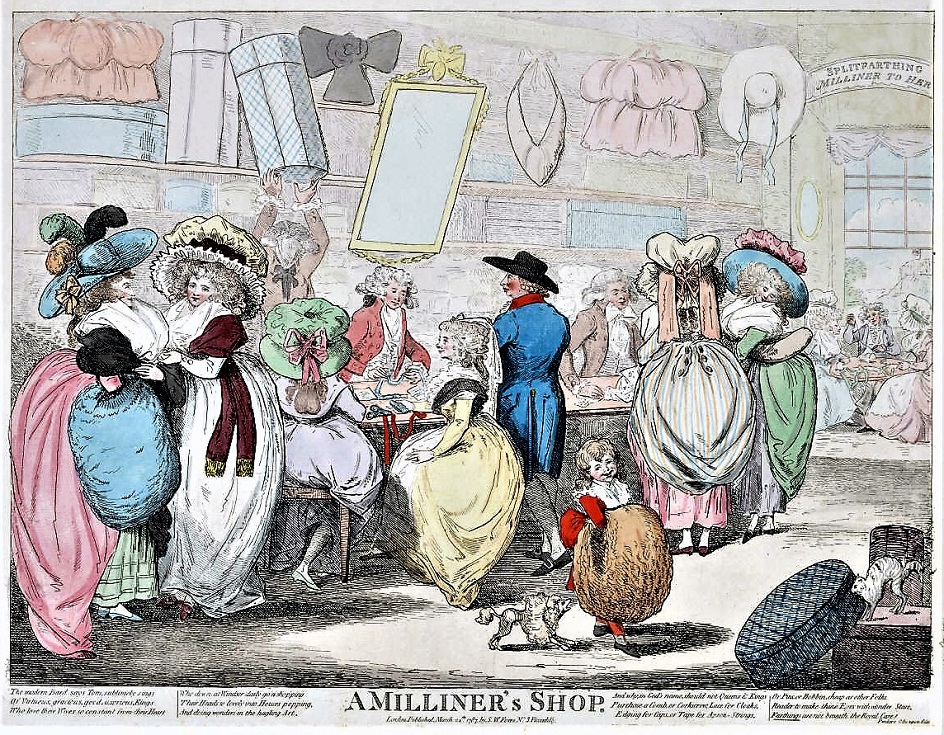 1787 A Milliner’s Shop, Lewis Walpole Library
Posted by Barbara Wells Sarudy at 4:00 AM