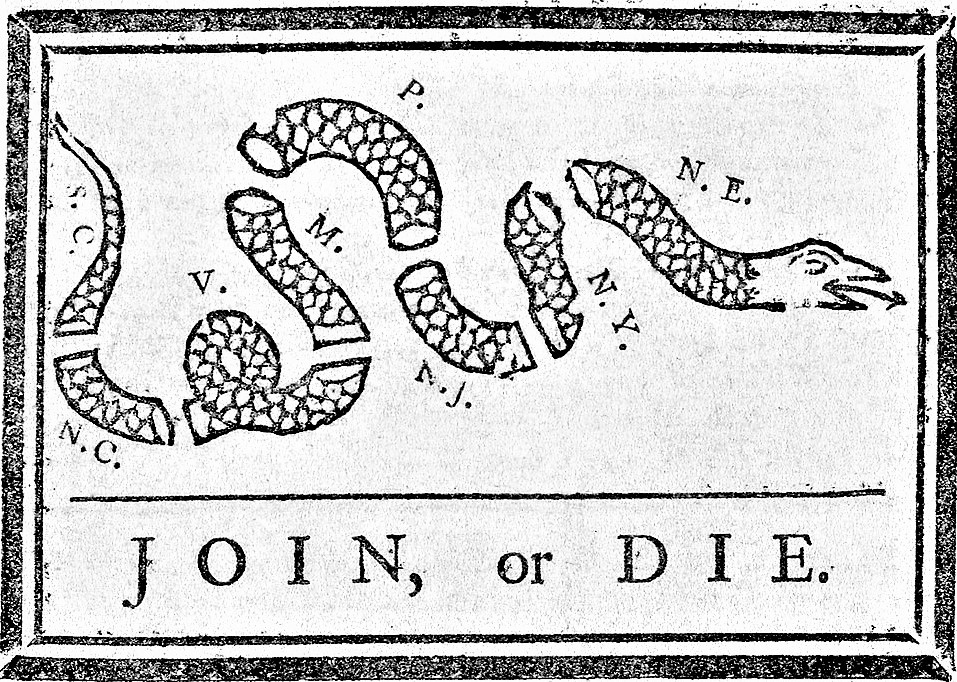 1754 Benjamin Franklin's chopped-up snake, urging union of the colonies with the caption 'Join or Die,' is the 1st American political cartoon. And he proposes to the Albany Congress that the colonies should unite to form a colonial government.

1750
Over a million people live in colonial America.

The British Parliament passes The Iron Act, limiting the growth of the iron industry in the American Colonies

The word "bluestocking," is used as a put-down for learned women.

Neoclassicism as a reaction against baroque and rococo styles spreads over Europe.

The first American coal mine opens on the James River in Virginia.

The river flatboat and the Conestoga wagon first appear in Pennsylvania.

The first Great Awakening ends when Jonathan Edwards (1703-1758) is forced to resign from his church in Northampton, MA because of his emphasis on the sinful nature of man. He rejects the liberal "halfway covenant." He becomes pastor of a church in the frontier settlement of Stockbridge, in western Massachusetts.

The Currency Act is passed by the English Parliament, banning the issuing of paper money by the New England colonies.

Charlotte Ramsay Lennox (1720-1804) writes the first novel by an Ameican-born writer, The Life of Harriet Stuart. Lennox, born in New York and sent to England at the age of fifteen for schooling, remained there for the rest of her life. It is also the first novel with American settings, such as the Hudson River, Albany, and the Mohawk Valley.

1751
Britain passes the British Calendar Act, which places England and its colonies on the Gregorian Calendar beginning in 1752.

Benjamin Franklin (1706-1791) publishes "Experiments and Observations on Electricity," using the terms positive and negative for the first time. And he helps found the first “English Academy” in Philadelphia.

The Ohio Company actively colonizes in the Ohio Valley.

Sugar cane grown in America is introduced in Louisiana by Catholic missionaries; it is used to make a kind of rum.

The first cricket match is held in New York City.

1752
French and Indian: The French begin building forts across Pennsylvania and into Ohio to stop British invasion of their territory.

Thomas Bond (1712-1784) establishes the first general hospital in the colonies in Philadelphia, treating all except those with incurable or infectious diseases.

Martha Daniell Logan (1704-1779) writes a "Gardener's Kalendar." The Charleston, South Carolina, widow, plantation owner, schoolteacher, and horticulturist's publishes it in the South Carolina Almanack, published by John Tobler. Her work is significant as the first American treatise on gardening.

Charlotte Ramsay Lennox writes The Female Quixote; or, The Adventures of Arabella satirizing the idealized conventions of French romances. Ramsay would dramatize the novel as Angelica; or Quixote in Petticoats in 1758.

1753
Benjamin Franklin (1706-1790) and William Hunter are appointed as postmasters general for the American Colonies.

French troops from Canada seize the Ohio Valley in action leading up to the French and Indian War.

Moravians from Pennsylvania purchase a 100,000-acre tract in present-day Forsyth County in North Carolina from Earl Granville. They name the area Wachovia, which means “peaceful valley.” They establish the settlement of Bethabara in November.

Elizabeth Sampson Ashbridge (1713-1755) writes an autobiography of her spiritual development Some Account of the Fore Part of the Life of Elizabeth Ashbridge. An ordained Quaker minister, she hints that the ability to free herself from male authority depends on her ability to accept God's authority. The work would be first published in 1774.

1754
George Washington kills ten French troops at Fort Duquesne, in the first violent clash of the French and Indian war. Washington leads a small group of American colonists to victory over the French, then builds Fort Necessity in the Ohio territory. In July, after being attacked by numerically superior French forces, Washington surrenders the fort and retreats.

The French and Indian War begins. France and Britain fight for seven years over the territory from Canada down the west side of the Mississippi River to New Orleans. In Europe, the conflict is called the Seven Years' War. Albany Plan of Union; June

King’s College in New York City is founded; it becomes Columbia University in 1784.

Benjamin Franklin's chopped-up snake, urging union of the colonies with the caption 'Join or Die,' is the first American political cartoon. And he proposes to the Albany Congress that the colonies should unite to form a colonial government.

Esther Edwards Burr (1732-1758) begins writing her Journal. Burr chronicles daily life from 1754 to 1757, giving information on topics such as the founding of Princeton College, religious revivals, childbearing practices, the French and Indian War, and women's roles during the period. It would be published in several editions by Jeremiah Eames Rankin (1828-1904) as Esther Burr's Journal.An account of the kidnapping by Indians of Elizabeth Hanson (1648-1737), wife of John Hanson of Dover, New Hampshire was published posthumously in Philadelphia as God's mercy surmounting man's cruelty, exemplified in the captivity and redemption of Elizabeth Hanson, wife of John Hanson, of Knoxmarsh at Kecheachy, in Dover township, who was taken captive with her children, and maid-servant, by the Indians in New-England, in the year 1724.

1755
British General Edward Braddock (c.1695-1755) takes command of all English forces in America during the French and Indian War. In April, Gen. Braddock and Lt. Col. George Washington set out with nearly 2000 men to battle the French in the Ohio territory. In July, a force of about 900 French and Indians defeat those English forces in an ambush near Ft. Duquesne in Western Pennsylvania. Braddock is mortally wounded. Massachusetts Governor William Shirley then becomes the new commander in chief.

The first Conestoga wagons made in Pennsylvania are acquired by George Washington for an expedition through the Alleghenies.

Sarah Haggar Osborn (1714-1796) writes a series of emotional letters on her spiritual awakening The Nature, Certainty, and Evidence of True Christianity. This work begins as a series of letters to a friend and represents a look back on Osborn's spiritual awakening. In 1799, Osborn would expand her letters into Memoirs of the Life of Mrs. Sarah Osborn.

England declares war on France, as the French and Indian War in the colonies now spreads to Europe.

The governor of Pennsylvania, in response to Indian attacks, offers a bounty for Indian scalps. This act of war forces those remaining Quakers to resign from the Assembly, as it goes against the pacifist beliefs . This marks the true onset of the Age of Quietism within the Quaker community.

1757
William Pitt becomes England's Secretary of State and escalates the French and Indian War in the colonies by establishing a policy of unlimited warfare.

The first street lights—whale-oil lamps designed by Benjamin Franklin (1706-1790)—are used on a few streets in Philadelphia.

The first public concert is held in Philadelphia.

Benjamin Franklin (1706-1790) is sent to London as a representative of the Pennsylvania legislature to negotiate for the heirs of William Penn and remains there for 5 years.

Martha Wadsworth Brewster (fl. 1725-1757) of Lebanon, Connecticut, writes Poems on Divers Subjects, containing poems, letters, & some prose works. Brewster tackles radical subject matter for an 18th century woman, including military events & the brutality of war. When the book first appears, Brewster has to demonstrate her authorship to a public skeptical that a woman could write poetry by publicly paraphrasing a psalm into verse.

A school for Negroes is established in Philadelphia by the Anglican missionary group.

Molly (Mary) Brant (c.1736-1796), a Mohawk woman, becomes the partner of Sir William Johnson. She is largely responsible for the alliance between the Iroquois and the British.

A raiding party consisting of French and Shawnee warriors takes Mary Jemison (1743-1833) captive. She adopts Native American customs, which she retains all her adult life.

The first North American Indian reservation is established on 3,000 acres in New Jersey.

Elizabeth Sandwith Drinker (1734-1807) begins writing her diary, which later becomes an in-depth portrait of an elite urban woman from Philadelphia in the late eighteenth century. Excerpts of the diary would be first published in 1889.

Charlotte Ramsay Lennox writes Henrietta, a novel concerning an orphaned French girl's adventures. It would be adapted by the author as the drama The Sister in 1769.

Annis Boudinot Stockton (1735-1801) writes "Epistle to Mr. S." This is one of Stockton's earliest poems and possibly the first poetry published by a New Jersey woman. The poem originally appeared in the New York Mercury and reveals a period of great sadness in Stockton's life--the time of her husband's extended and final illness. Stockton would become one of the most published American women poets of the century, with at least twenty-one of her poems appearing in prestigious newspapers and magazines.

Martha Brewster publishes Poems on divers subjects…A word of advice reserv'd for my two grand-sons, being yet babes. By Martha Brewster, of Lebanon.

Pennsylvania Quakers forbid their members from owning slaves or participating in the slave trade.

1759
The French surrender to the British at Quebec. Ft. Niagara is captured by the British.

A measles epidemic breaks out all over North America, wherever white people live.