In Business - Consumer Boycotts during the American Revolution 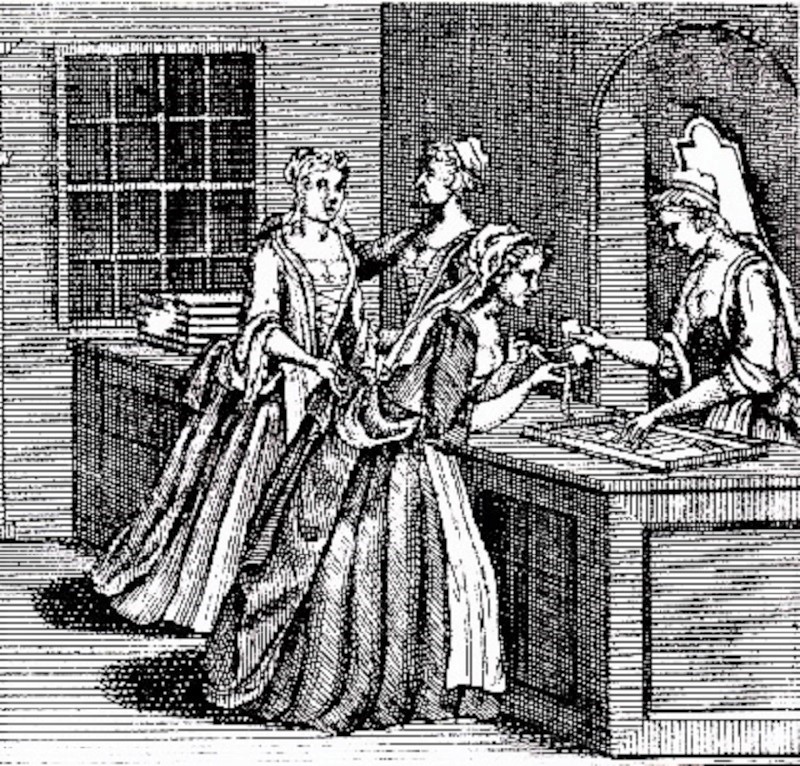 During the American Revolution, many women joined protests and boycotts of imported British goods voluntarily, while others succumbed to pressure from patriots.  The colonists first used nonimportation to protest the Sugar Act in 1764, and they turned to it again when the Townshend duties were passed in 1767. Although some merchants, especially those in Philadelphia, resisted these agreements, nearly every colony eventually signed them.

Nonimportation affected merchants and artisans, such as seamstresses, in opposite ways. Artisans benefited because the ban on British goods enlarged the market for domestic-made products.

In contrast, the movement divided merchants. Those who dealt primarily in dry goods from Britain believed that they were being unfairly singled out. They complained that the boycotts left virtually unaffected the merchants who dealt in West Indian molasses and rum.

Nonofficial bodies, called committees of inspection and headed by merchants, planters, and artisans, took on the responsibility of enforcing the agreements. Patriotic newspapers did their part by publishing the names of merchants who continued to import from British suppliers. Mobs sometimes exerted pressure by tarring and feathering those who refused to honor the agreements. A few merchants were driven out of town or had their warehouses damaged and looted.

In 1769 an angry mob confronted the Boston shopkeepers Betsy and Anne Cuming for continuing to import British goods. “I told them we have never antred into eney agreement not to import for it was verry trifling owr Business,” Betsy wrote to a friend. The committeemen threatened to publish the sisters’ names in the newspaper, but Betsy claimed that the publicity only “Spirits up our Friends to Purchess from us.” The Cumings could not long resist the Patriots’ pressure, however, and the sisters immigrated to Nova Scotia when the British army evacuated Boston in 1776.

Women participated in and even organized consumer boycotts. Because almost everyone was a consumer to some degree, many individuals and groups participated in the patriot cause by resolving not to consume British-made products. Merchants dealing in imported luxury items were hurt by these movements.

Women vowed to stop serving tea and refrained from wearing clothes made with fabrics imported from Britain. A widely reprinted appeal that first appeared in 1767 urged them to “Wear none but your own country linen / Of economy boast. Let your pride be the most / To show cloaths of your make and spinning.”

At least one wedding received publicity because, as one newspaper reported, “the bride and two of her sisters appeared in very genteel-like gowns, and others of the family in handsome apparel, with sundry silk handkerchiefs, &c., entirely of their own manufacture.”

A few women’s groups even formalized their agreements, to much fanfare. In February 1770 the Boston Evening Post reported that more than three hundred “Mistresses of Families” had vowed to “totally abstain” from serving tea, “Sickness excepted” as an expression of their desire to save the “Country from Ruin and Slavery.”

Another group of women in North Carolina signed an agreement in October 1774 proclaiming it their “duty” to do “every thing as far as lies in our power” to support the “publick good.” Most of the shunned items were luxuries, not necessities. In addition to tea, wine, and fancy textiles patriotic Americans gave up their coaches and carriages, gold and silver buttons, diamonds, clocks, watches, and jewelry. These boycotts allowed participation in public affairs to those, especially women, who had few other channels for expressing their political sentiments.
Posted by Barbara Wells Sarudy at 4:00 AM