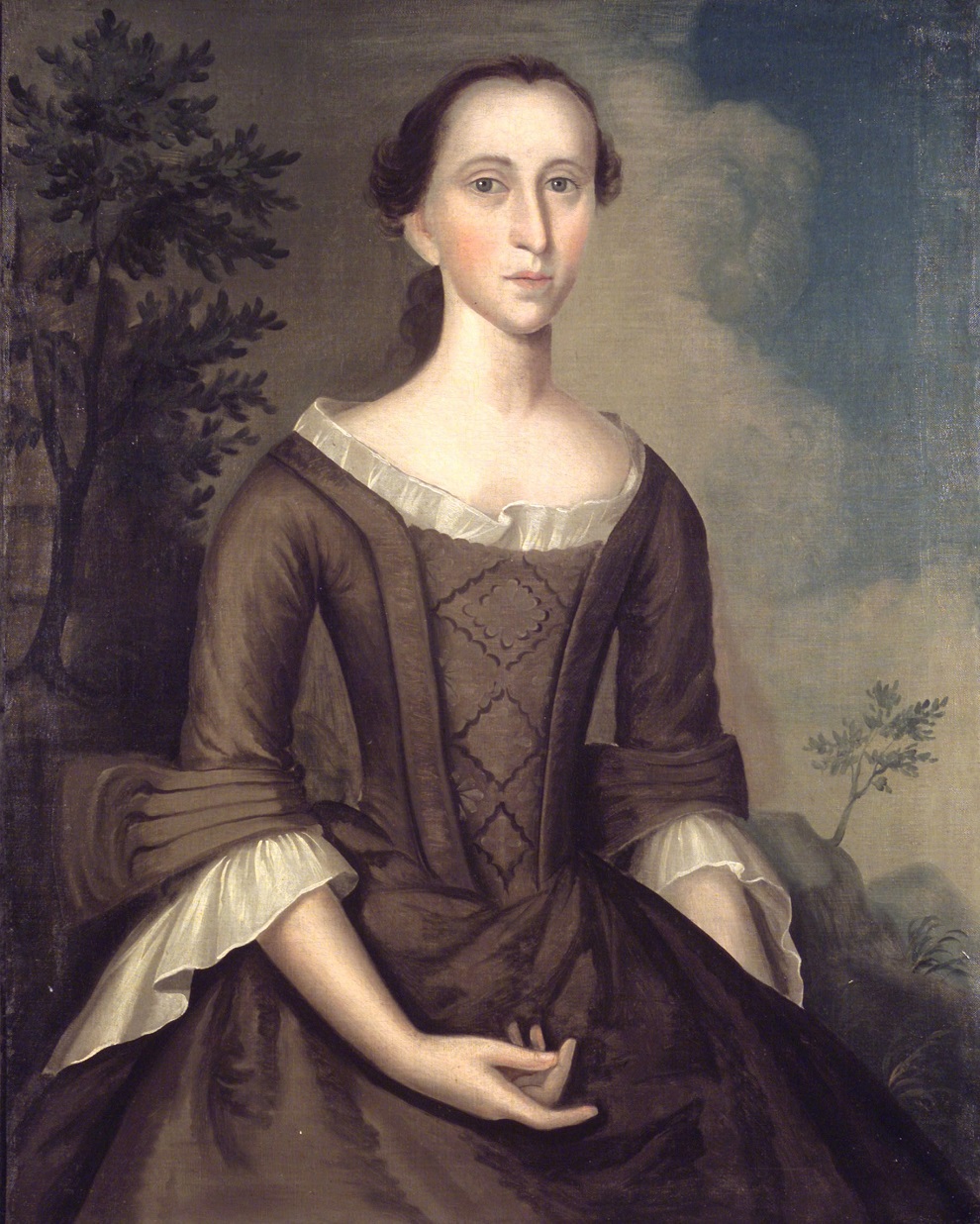 
Mrs. Haskins (née Hannah Upham daughter of Phineas Upham & Hannah Waite ) (1734-1819) was the grandmother of Ralph Waldo Emerson.  She followed the Congregationalist faith; while her husband, Captain John Haskins (1729-1814), was a devout Episcopalian, & on Sundays they led separate contingents of their children to their respective churches.

John Haskins was born in Boston, in 1729. "At the time when he was sixteen months old" he & his father had the small-pox the natural way. His father died, & the child was so reduced by the disease, that he was laid in the same room with his father, apparently dead. By opening the windows the child was revived, & spared in mercy to his widowed mother... though he wished to go to sea he determined never to leave his mother until she had another friend." In early youth he applied himself to acquiring a knowledge of his father's trade, that of a cooper...

John now resolved to gratify his long cherished desire to go to sea. He accordingly embarked in a letter-of-marque vessel that was bound for the West Indies & commissioned to act against France & Spain, which were then allied in hostilities against England.  He was absent two years, sailing from one island to another, & supporting himself by working at his trade...he returned home...

On the twenty-third anniversary of his birth, March 12, 1752, Mr. Haskins married Hannah, daughter of Phineas & Hannah (Waite) Upham of Maiden. Mrs. Haskins was about five years younger than her husband...

Mr. Haskins attended King's Chapel, & became deeply interested in the Episcopal church, of which for the more than fifty remaining years of his life he was a prominent & respected member... He allowed his wife to worship according to the Puritan forms under which she had been educated...

Mr. Haskins took high views of the duties which pertain to the head of a family to provide for the Christian training of the children...His daughter Ruth (afterwards Mrs. Emerson) was, I believe, one of the children who expressed a preference for the Episcopal worship..

Mr. Haskins was over seventy years of age when he retired from active business...His son Ralph, in the entry in his diary which records his father's death, says of his father & mother: "No couple ever lived more happily together during their married life, a period of nearly sixty-three years..."

Mr. Haskins died in Boston, October 27, 1814..Mr. Haskins's wife, & thirteen of his children survived him, besides forty-six grandchildren...The following lines) were written upon Mr. Haskins's death by his grandson, Ralph Waldo Emerson, then a lad of eleven years:

ON THE DEATH OF MR. JOHN HASKINS.

See the calm exit of the aged saint,
Without a murmur & without complaint;
While round him gathered^ all his children stand,
And some one holds his withered, pallid hand.
He bids them trust in God, nor mourn, nor weep;
He breathes religion, & then falls asleep.
Then on angelic wings he soars to God,
Rejoiced to leave his earthly, mortal load;
His head is covered with a crown of gold,
His hands, renewed, a harp immortal hold;
Thus clothed with light, the tuneful spirit sings —
He sings of mercy & of Heavenly things.

The subject of the portrait above, Hannah Upham, the wife of John Haskins, came of good old New England stock, a typical Puritan family. Her ancestor, John Upham, came from England, probably in 1635, & settled in Weymouth; but later removed to Maiden, where the family lived for many years, & where Hannah herself was born. The Uphams were evidently men of ability...One of them was Town Treasurer. Another, Lieutenant Phineas Upham, son of the first settler, was mortally wounded in the great swamp fight with the Narraganset Indians at Canonicus, in 1675. Through her mother, Hannah Waite, Miss Upham was descended from Captain John Waite, one of the leading men of Maiden, who was captain of the military company, Speaker of the House of Deputies, & one of the compilers of the first body of the Colony Laws; she was also descended from Rose Dunster, a sister of the Rev. Henry Dunster, the first President of Harvard College; from Thomas Oakes, cousin of the Rev. Mr. Oakes, the fourth President of the same institution, & from John Howland, the famous Mayflower Pilgrim. Hannah's father, Phineas Upham, was one of the ten children of Phineas & Tamsen Upham of Maiden, & was born in that town in 1707-8...

When Hannah was about four years old, the throat distemper prevailed in Maiden & many died. Among these were Mr. Upham & three of his four children. Hannah, the surviving child, was brought very low...After some time, she was restored, to the great joy of her afflicted mother, with whom she lived alone in the house for seven years...
Posted by Barbara Wells Sarudy at 4:00 AM