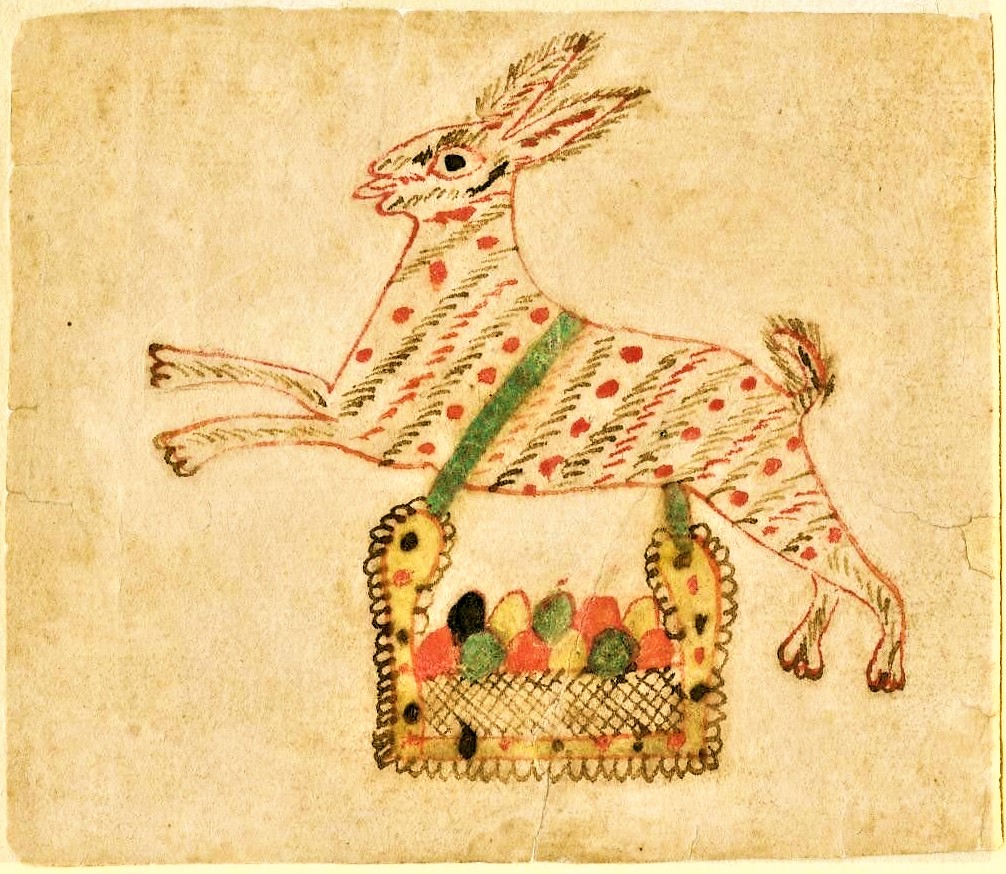 This drawing is an example of a Pennsylvania German tradition of decorated manuscripts known as fraktur.  This delightful image is attributed to tailor, sailor, & schoolmaster Johann Conrad Gilbert (1734–1812), who emigrated from Germany in 1757, and ultimately settled in Berks County, Pennsylvania.  John Conrad Gilbert b: 4/29/1734 in Hoffenheim, Germany d: 1/26/1812 in Schuylkill County, Orwigsburg, PA. married Anna Elizabeth 'Stoltz' 4/19/1757 in Trappe Lutheran Church, Montgomery County, PA.  Gilbert served as a private on an armed war vessel during the Revolutionary War on boats CEEagle and on the CEVulture commanded by Jacob Hance, July 1, 1776-Jan 21, 1777.  His place of residence during the war was Orwigsburg, Berks/Schuylkill, PA.  The Historical and Biographical Annals of Berks County, PA, indicate that Conrad was a tailor in his early manhood. He became a schoolmaster & an artist who produced a number of drawings in color (Fraktur) on laid paper, some with texts or other writings.  The first Easter Bunny depictions in America are attributed to him. Drawings are in Abby Rockefeller Folk Museum in Williamsburg, VA & at Winththur in Delaware.

These are some of the earliest known American depictions of the Easter Bunny. Together with the Christmas tree, the custom of the Easter rabbit and colored eggs was brought to America by immigrants from southwestern Germany in the 1700s, and has become a favorite American tradition.  He likely made the drawing as a gift for one of his students.  Pennsylvania German tradition of decorated manuscripts known as fraktur, which include birth and baptismal certificates, family records, writing samples, and bookplates.
Posted by Barbara Wells Sarudy at 4:30 AM