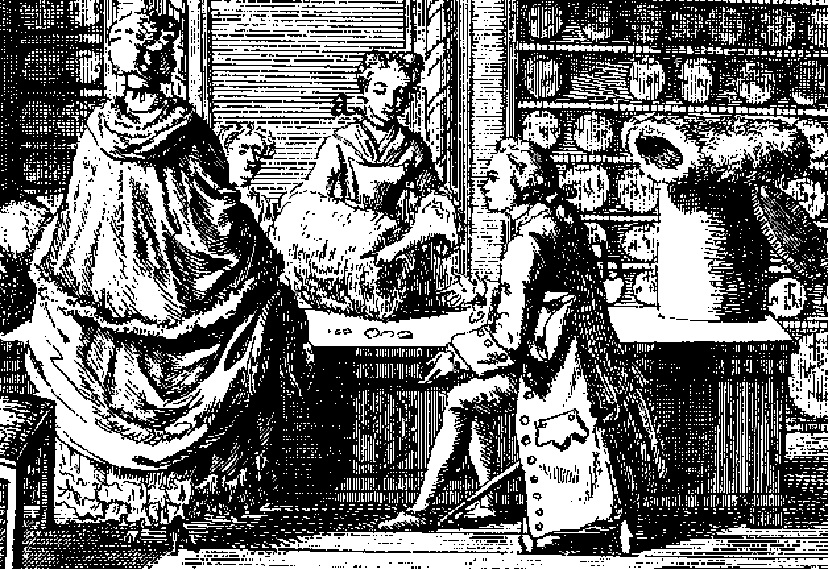 In 1766, Philadelphia shopkeeper Rebecca Steel advertised that she had for sale “Dry Goods, Bohea, Green, Hyson, and Congo Teas &c. as usual, at the most reasonable Rates,” and also “a Parcel of fine silks” that she would “sell low” (Pennsylvania Gazette, Oct. 9, 1766). In the same advertisement she warned her customers that if they didn’t “make speedy payment,” she would “be put to the disagreeable Necessity of suing.” A decade later, in the thick of the Revolutionary War, George Washington bought tea from Steel. He didn’t have to worry about being sued, however, since he paid his bill. We know this because the receipt, (Feb. 10, 1777) signed by Thomas Mifflin, quartermaster general of the Continental Army, is in his papers at the Library of Congress.

Steel’s receipt is just one among many pieces of evidence in Washington’s papers that he regularly did business with women. Many of the women he dealt with were poorer and less formidable than Rebecca Steel. In New York on Sept. 20, 1776, he paid a woman six shillings to wash his “plain shirts,” stocks (a kind of 18th-century necktie), stockings and a silk handkerchief. The bill he signed identifies her only as a “servant of Major Leach in the camp.” (See this story from the Teaching with the Library of Congress blog about another laundress who worked for Washington during the Revolutionary War.) Hannah Till, a servant who worked at Washington’s headquarters at Morristown, N.J., signed the receipt for wages she received on June 23, 1780, with an X, the mark used in place of a signature by people who did not know how to write. These were temporary jobs for poor women with limited skills who were available to work for Washington as he moved around from place to place during the Revolutionary War.

Other women had more sophisticated skills or valuable goods to offer. Dorothy Shewcraft, for example, sold Washington a pair of andirons and a “scotch carpett” for his New York headquarters (May 6, 1776), and Hannah Stewart made him “table cloths and two towels” when he was headquartered in West Point (Aug. 14, 1779). Both Shewcraft and Stewart signed the receipts they received from Washington with clear, neat signatures. Widow Ann Emerson, housekeeper in Washington’s Philadelphia household while he was president, came so highly recommended that she felt confident enough to bargain for her salary, declining to accept less than £50 per year, a price, Washington’s secretary reported, that was “much too high.” Emerson also won the privilege of keeping her 7-year-old daughter with her, even though Martha Washington “had rather it should not be brought into the family.” This was a standard objection on the part of employers of live-in servants. (Tobias Lear to George Washington, May 1, 1791).

Much of the work that women did for pay in early America was an extension of household work. Women kept gardens and sold produce, kept chickens and sold eggs, and kept cows and sold dairy products. Young, unmarried women often went to work as servants for their neighbors as a way to experience a little independence and build a nest egg before marriage. Nearly all women were constantly at work spinning, weaving, sewing, knitting, mending and washing. Women delivered babies and provided nursing for their families and neighbors. In a world in which there were no grocery stores, clothing stores and sometimes, especially on the frontier, no trained doctors, these women provided not only for their households but also for their communities.

Some women, however, stepped into traditionally male domains, operating printshops and publishing newspapers, managing land, farming, and owning shops, merchant and manufacturing firms, and trading ships. Typically these women were widows. According to Anglo-American law in this period, when a woman married, her husband took control of her property and the money she earned legally belonged to him. When a woman’s husband died, however, she could regain her economic autonomy and in some cases get control of family property and businesses. Some wives had been supporting their husbands’ businesses with their money or labor long before they owned them as widows.

Washington dealt with several such widows. From the 1760s through the early 1770s, when in accord with revolutionary boycotts he stopped importing goods from England, he repeatedly bought nails, hinges, padlocks and other metal supplies from the British firm of Theodosia Crowley and Co. Crowley was in her 30s when her husband, heir to one of England’s great ironworks, died and left her the business until her sons were old enough to take over. They lived long enough to do so, but when they too died young, Crowley took over the business again and ran it herself with the help of a series of managers. By the time she died at 88 in 1782, she had run the business for a total of 38 years. Not only had she outlived her husband by more than half a century, she also outlived all 6 of her children. (For Washington’s purchases from Crowley, see, for example, Robert Cary, invoices, March 1760, March 1761 or April 1762).

During the revolution, Washington dealt not only with Rebecca Steel, the Philadelphia tea merchant, but also with Ann Van Horne, a New York wine merchant. In April 1776, just before Washington arrived in New York City to face the British ships that were gathering threateningly in the harbor, the steward and housekeeper in charge of setting up his headquarters ordered 37 bottles of wine from Van Horne. Unlike Hannah Till, who could not sign her name, Van Horne signed hers in a clear, firm hand. Van Horne had married into a family of New York merchants, one of whom was her husband, Garrit Van Horne, who had died by 1765. He seems to have respected her business abilities, since he made her a co-executor of his will. Advertisements in New York newspapers in the 1760s and 1770s show her managing his estate, selling Madeira, claret, brandy, sugar and Cheshire cheese, and also substantial land holdings and a slave. (New York Mercury, Sept. 23, 1765; New York Gazette and the Weekly Mercury, Aug. 12, 1771).

The following winter Washington purchased tea from Rebecca Steel. Like Ann Van Horne, Steel was a widow and the co-executor of the estate of her husband, James Steel (Pennsylvania Gazette, Dec. 2, 1742). Historian Karin Wulf identifies her as one of Philadelphia’s handful of “elite” women shopkeepers. One of her frequent customers was Quaker Philadelphian Catherine Drinker, whose detailed diary records her visits to Steel’s shop and her husband Henry Drinker’s attendance at her funeral in 1783. Steel’s life can also be traced in her advertisements in Philadelphia newspapers.

More long-lasting and complex was Washington’s business relationship with his Virginia neighbor, Penelope Manley French. French was a wealthy widow of Washington’s own age who owned land adjacent to Washington’s that he very much wanted to buy but that she did not want to sell. Her ownership of the land took the form of a life interest that would pass to her only child, Elizabeth, at her death. When Elizabeth married in 1773, two years after the death of her father, Daniel French, Washington commented: “Our celebrated Fortune, [Miss] French, whom half the world was in pursuit of, bestowd her hand on Wednesday last . . .” (Washington to Burwell Bassett, Feb. 15, 1773). Penelope French’s land formed a part of the fortune that Elizabeth French brought to her husband, Benjamin Dulany. (The Virginia Gazette in Williamsburg, which contained the Dulanys’ marriage announcement, was published by widow Clementina Rind. The following year, Virginia’s House of Burgesses, of which Washington was a member, appointed her the colony’s printer).

French held out against Washington for many years. But despite her display of determination, there is not a single letter between her and Washington in his papers. All her communication with him was carried out through male surrogates, her son-in-law and her half-brother, William Triplett. Eventually she gave in – partially. In 1786 Penelope French agreed, not to an outright sale, but to a rental of the land for the duration of her lifetime. But even after she agreed to it, French didn’t make it easy for Washington to conclude the deal. When in September 1786 Washington rode over to William Triplett’s to meet with French and sign the papers, he found Triplett sick in bed and French absent. He and Triplett signed the papers a month later in court in Alexandria, without her (Diary, Sept. 16 and Oct. 16, 1786).

Washington continued to work around French. In a 1799 letter to Benjamin Dulany about a related arrangement (Washington to Benjamin Dulany, July 15, 1799) in which he was renting slaves from French, Washington carefully writes, “I thought it respectful & proper however, to couple her name with yours” and acknowledges Dulany’s own interest in the deal, since the slaves would “ultimately, descend to you, or yours.” (Washington to Benjamin Dulany, Sept. 12, 1799.) Washington was treading difficult territory here. On one hand he scrupulously named French, who was after all the one he was doing business with; at the same time he reminded her son-in-law, who was acting for her, of his own stake in the deal. (The slaves who were the subject of the deal had no say at all.) Washington died that December; Penelope French outlived both him, and the arrangement she made with him, by almost six years (Penelope French obituary, Alexandria Advertiser, Oct. 19, 1805).
Posted by Barbara Wells Sarudy at 4:00 AM