A hot cross bun is a spiced sweet bun made with currants or raisins, marked with a cross on the top, and traditionally eaten during Easter Week, especially on Good Friday, in the United Kingdom and some parts of the Americas. Hot Cross buns are older than Christianity - pagan celebrants ate wheat cakes at their spring festivals, and the Greeks, Romans and Ancient Egyptians all had buns with a cross etched on the top. The round bun represented the full moon, and the cross divides the bun into the four lunar quarters. Traditional buns have the cross cut into the dough or pricked out with a pin. The crosses of icing are a more recent thing. "Hot cross bunns, two a penny bunns" Thomas Rowlandson; Cries of London. Met Museum
One a penny, two a penny, Since before medieval times, marking baked goods (like breads, buns and cakes) with the sign of a cross was a common thing for a homemaker or a baker to do – the cross was said to ward off evil spirits which could affect the bread and make it go moldy.  In the time of Elizabeth I of England (1592), the London Clerk of Markets issued a decree forbidding the sale of hot cross buns and other spiced breads, except at burials, on Good Friday, or at Christmas. The punishment for transgressing the decree was forfeiture of all the forbidden product to the poor. As a result of this decree, hot cross buns at the time were primarily made in home kitchens.
Kate Colquhoun, writes in her book, Taste: The Story Of Britain Through Its Cooking (2007), "In honor of Easter, goddess of spring and the dawn, [Anglo-Saxon] bread dough could be studded with dried fruits and baked into small loaves that, as Christianity spread, began to be marked with a cross by monks: the earlist form of hot-cross bun.”

Although the first name for these buns were Good Friday Buns or Cross Buns the earliest written instance of the name ‘Hot Cross Buns’ comes from 1733 A.D. The name is recorded in a popular rhyme which includes the old reason and superstition for making the sign of the cross in baked goods:
“Good Friday comes this month—the old woman runs
With one or two a-penny hot cross buns,
Whose virtue is, if you believe what’s said,
They’ll not grow mouldy like the common bread.” 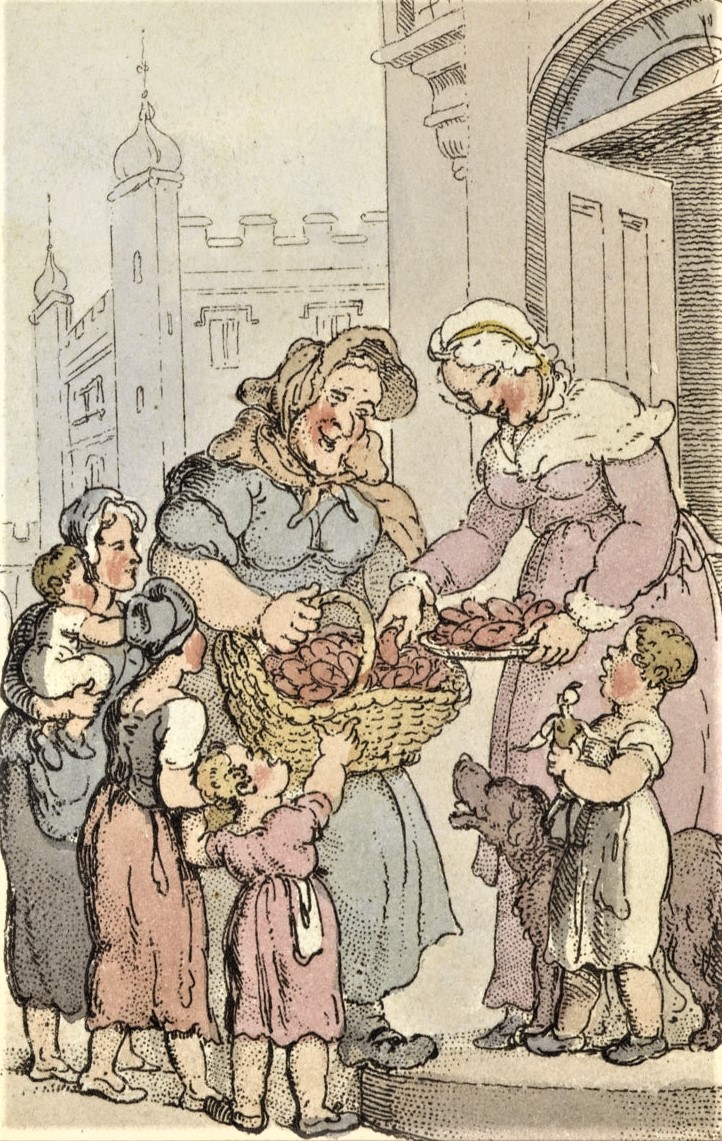 Hot Cross Buns; Thomas Rowlandson’s Characteristic Sketches of the Lower Orders. British Library
Bread, leavened and unleavened) and religion have been intricately linked for thousands of years, well before Christianity, going back even to the stone age. However, in the 1700s, ‘buns’ were specifically looked at by scholars, who thought they could be traced back to ancient Greek and Roman customs …

The 1778 book A View Of Northumberland written by William Hutchinson and Thomas Randal, explains, "I intimated in the preceding pages, an intention of remarking the Sweet Bread used in religious rites. Small loaves of bread, peculiar in their form, being long and sharp at both ends, are called Buns. This name takes place where old religious ceremonies have been solemnized, derived from the consecrated sweet bread, which was offered on high festivals … the offerings which people in ancient times used to “present to the Gods”, were generally purchased at the entrance of the temple; especially every species of consecrated bread, which was denominated accordingly. One species of sacred bread which used to be offered to the Gods, was of great antiquity, and called Boun .… The custom of Hot Cross Buns in London, on the morning of Good Friday, seems to have relation to these ancient practices. We only retain the name and form of the Boun; the sacred uses are no more."
The sign of the cross marked into breads was acceptable on Good Friday to the English Puritans, because it commemorated the crucifixion of Jesus Christ and his death at Calvary. Good Friday And Easter Sunday fall at the end of the Season of Lent, which lasts forty days (not counting Sundays), beginning on Ash Wednesday and ending on Holy Saturday, the last day before Easter.

The Christian traditional preparation for Easter Sunday consists of prayer, fasting, and alms-giving. So Good Friday, and the food consumed on this day – Good Friday Buns / Hot Cross Buns – are also traditionally a part of Lent fasting. Dr. Johnson kept this Good Friday breakfast tradition by eating cross buns. From The Life Of Samuel Johnson, by James Boswell, published 1791: “On the 9th of April [1773], being Good Friday, I breakfasted with him on tea and cross-buns … On April 18 [1783], (being Good-Friday) I found him at breakfast, in his usual manner upon that day, drinking tea without milk, and eating a cross bun to prevent faintness”.

By the 1700s, in many English towns, these Cross Buns were sold on the streets all day long by street sellers crying, “One-a-penny, two-a-penny, hot-cross buns” Some did not find the cries very sacred. From The Country Magazine Published in 1788, Observations On The London Cries - Hot Cross-Buns—although they occur but once a-year, are cried to a tune which has nothing of that majesty which would accompany sacred music —There is a slur upon hot which destroys the effect; and, indeed, gives the whole a very irreverent sound. 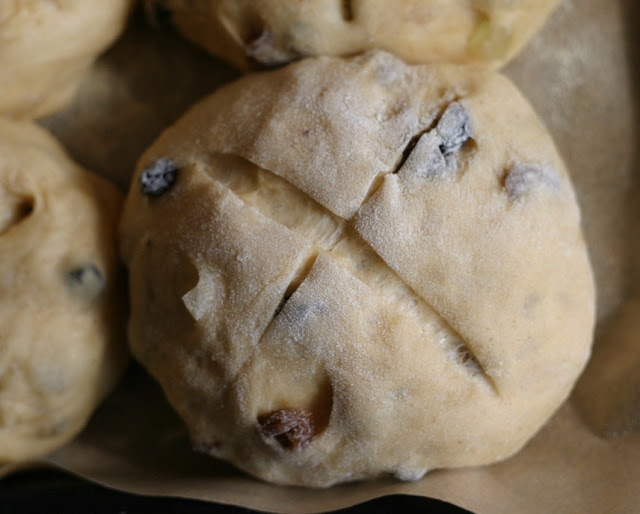 Recipe from The Art Of Cookery, By Hannah Glasse, Published 1740:
To make Buns. TAKE two pounds of fine flour, a pint of good ale-yeast, put a little sack [white wine] in the yeast, and three eggs beaten, knead all these together with a little warm milk, a little nutmeg, and a little salt; and lay it before the fire till it rises very light, then knead in a pound of fresh butter, a pound of rough carraway comfits, and bake them in a quick oven, in what shape you please, on floured paper.
Recipe from The Complete Confectioner, By Frederick Nutt, Published 1789:
Water Cakes. Take three pounds of powdered sugar and four pounds of sifted flour, mix the flour and sugar together on a clean dresser with half water and half whites of eggs, and as many carraway seeds as you think proper, mix all together so as to make it a very fine paste, that you can roll it on the dresser and the thinner the better, cut out the shape you like with a tin cutter; round and scolloped is the general fashion, but vary the shape to your own fancy … put them on a sheet of [buttered] paper and … bake them very little so as just to change the colour of them..
Posted by Barbara Wells Sarudy at 4:45 AM