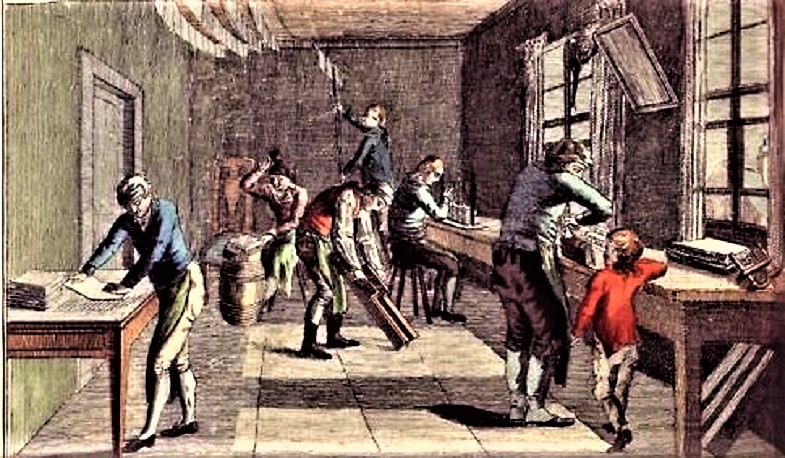 Jane Aitken (1764-1832) was an early American printer, publisher, bookbinder, & bookseller.  Aitken was born in Paisley, Scotland, on July 11, 1764. She was the 1st of 4 children that grew to adulthood in the family. Her father was Robert Aitken (1734–1802), a Scottish stationery & book merchant who later became a Philadelphia printer & bookbinder. Her mother’s maiden name was Janet Skeoch. Aitken & her family were among several Scottish families that emigrated to colonial British America in 1771. The Aitken family settled in Philadelphia, their port of importation. Aitken was involved with her father's Philadelphia publishing business, which consisted of a print shop & bindery. Her handwritten bookkeeping notes show that the print shop printed a newspaper, journals, books, & stationery. She inherited the printing business from her father's estate after his death in 1802 when she was 38 years of age. The publications were thereafter in her own name as Printed by Jane Aitken from her printing business, which she ran on Third Street in Philadelphia. Her father's estate came with a heavy debt of $3,000. Her brother, Robert Aitken Jr., who was a year younger than she & had been disowned by their father, was financially incapable to assist in this debt. Jane, being the oldest child, assumed the responsibility of caring for her 2 younger sisters, as her mother had previously died. She never married.

She was responsible for printing a number of publications after she took over her father's business, including contracts from the American Philosophical Society, the Philadelphia Female Association, & the Philadelphia Society for Promoting Agriculture, to name just a few. At least 60 of her published works are known from the period 1802 to 1812. Her most important work, according to the contemporary historian of printing Isaiah Thomas, was the four-volume Thomson Bible of 1808, which firmly established Jane's Aitken's reputation. This Bible was a new translation prepared by Charles Thomson, former secretary of the Continental Congress, the first English translation from the Septuagint (the Greek version of the Hebrew Scriptures or Old Testament).

Aitken's bookbinding business sometimes gave more support to the family than the actual printing part of the business. She bound many of the author's books she printed up, work for the Athenaeum of Philadelphia & some 400 volumes for the American Philosophical Society. Binding work of the 1780s to 1802 from her father's shop shows similarity to her binding work she did from 1802 to 1812 & shows that perhaps she did most if not all the binding work from his shop when she was younger.

John Vaughan, a friend & a librarian from the American Philosophical Society, gave her much work & even some financial assistance, but her business failed in 1813, & her equipment was sold off. Vaughan bought the equipment at a sheriff's sale & leased it back to her at under the going market rate, however after she failed again in 1814, she was put into debtors' prison at the Norristown Jail, 20 miles outside Philadelphia. She basically is unheard of in historical records other than the "late printer," until her death record of 1832, appearing in an obituary in Germantown, Pennsylvania. Her burial place is assumed to be in the destroyed cemetery of the Associate Reformed Presbyterian Church in Philadelphia, of which she was a member.
Posted by Barbara Wells Sarudy at 4:00 AM