The Christmas Tree comes to America 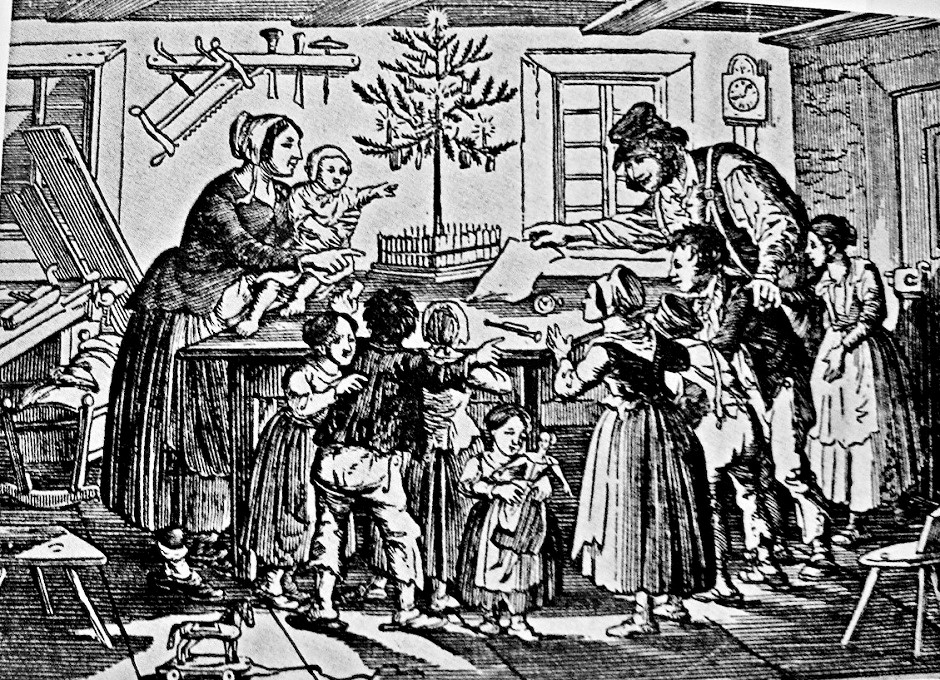 Germany is credited with starting the Christmas tree tradition in the 17C, when devout Christians brought decorated trees into their homes. Some built Christmas pyramids of wood & decorated them with evergreens & candles, if trees were scarce. 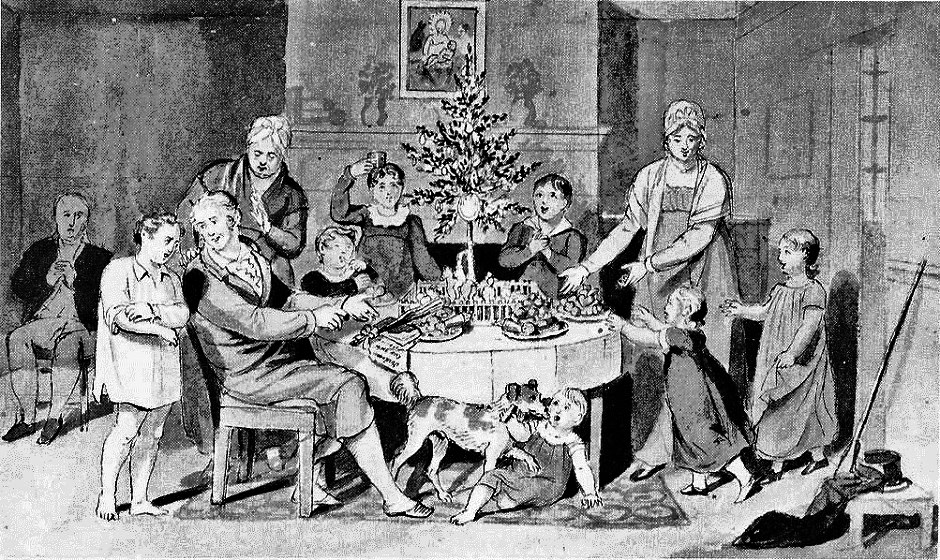 The earliest American image of a Christmas tree by John Lewis Krimmel (German-born American artist,1786-1821) who was painting in Pennsylvania.   A few years after this image was sketched, one of the the earliest known written references to the actual phrase “Christmas tree” occurred in Pennsylvania in 1821, when a father in Lancaster, wrote, that his children had gone to a local mill “for Christmas trees”

The Christmas tree in American literature was mentioned in a story in the 1836 edition of The Token and Atlantic Souvenir, titled "New Year's Day," by Catherine Maria Sedgwick, where she tells the story of a German maid decorating her mistress's tree. 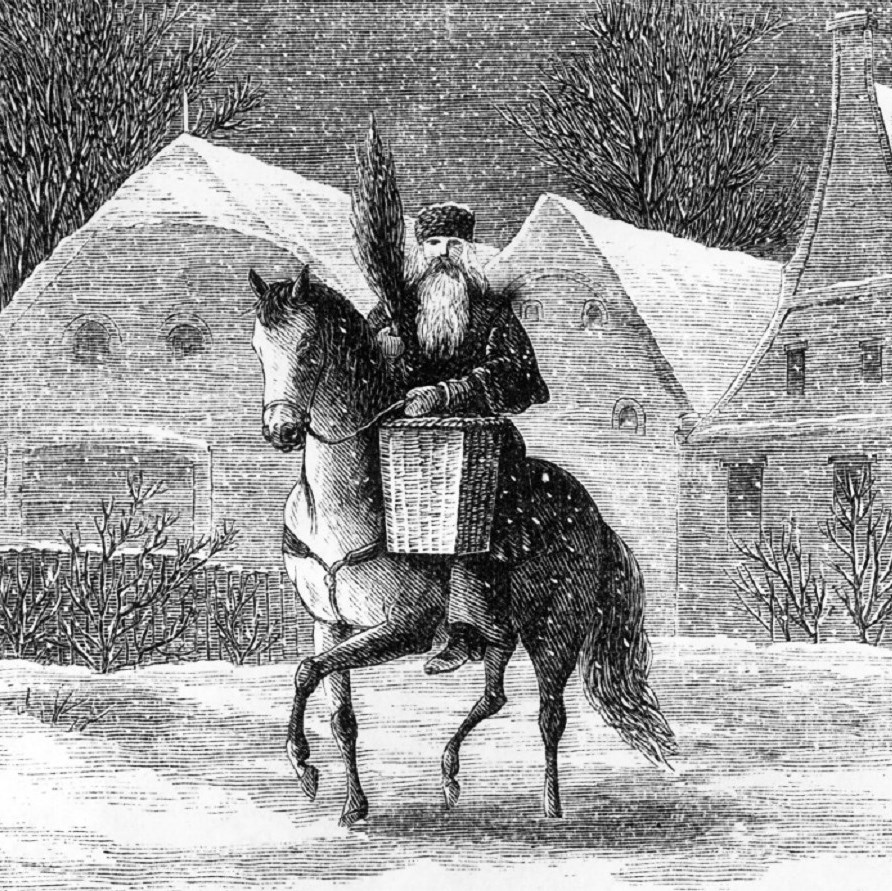 An engraving of St Nicholas carrying a Christmas tree in a basket, 1850

William Sandys, writing in England in the early 1850s, briefly mentioned that new fashion, the Christmas Tree: In recent times the Christmas tree has been introduced from the continent, and is productive of much amusement to old and young, and much taste can be displayed and expense also incurred in preparing its glittering and attractive fruit. It is delightful to watch the animated expectation and enjoyment of the children as the treasures are displayed and distributed; the parents equally participating in the pleasure, and enjoying the sports of their childhood over again. And where can the weary world-worn man find greater relief from his anxious toil and many cares, and haply his many sorrows, than in contemplating the amusements of artless children, and assisting as far as he is able; for it is not every one has tact for this purpose, and our young friends soon detect this, and discover the right “ Simon Pure.”  William Sandys, Christmas-tide, Its History, Festivities and Carols, With Their Music (London: John Russell Smith, 1852), p. 151. 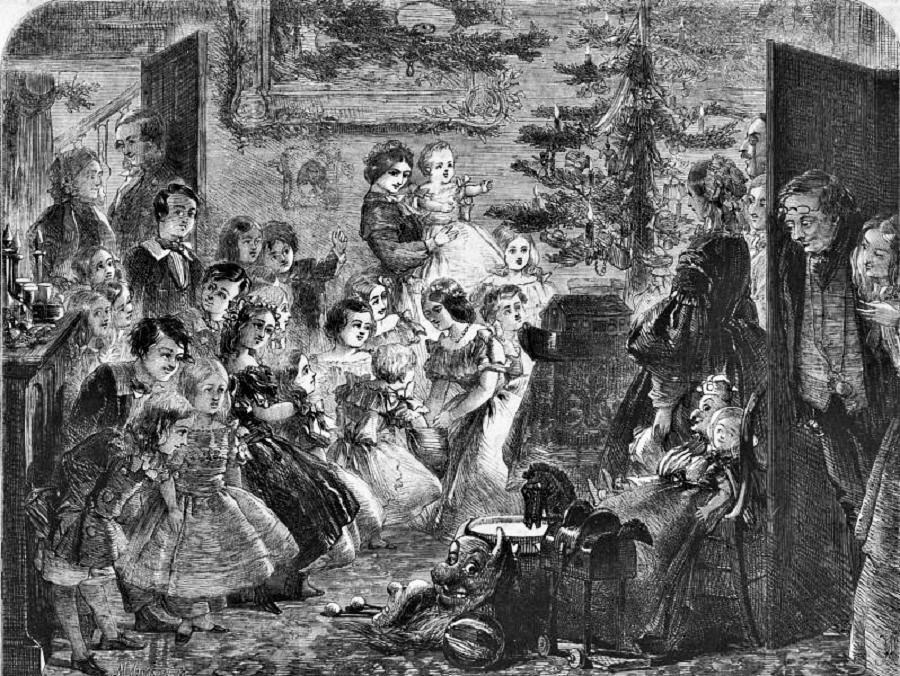 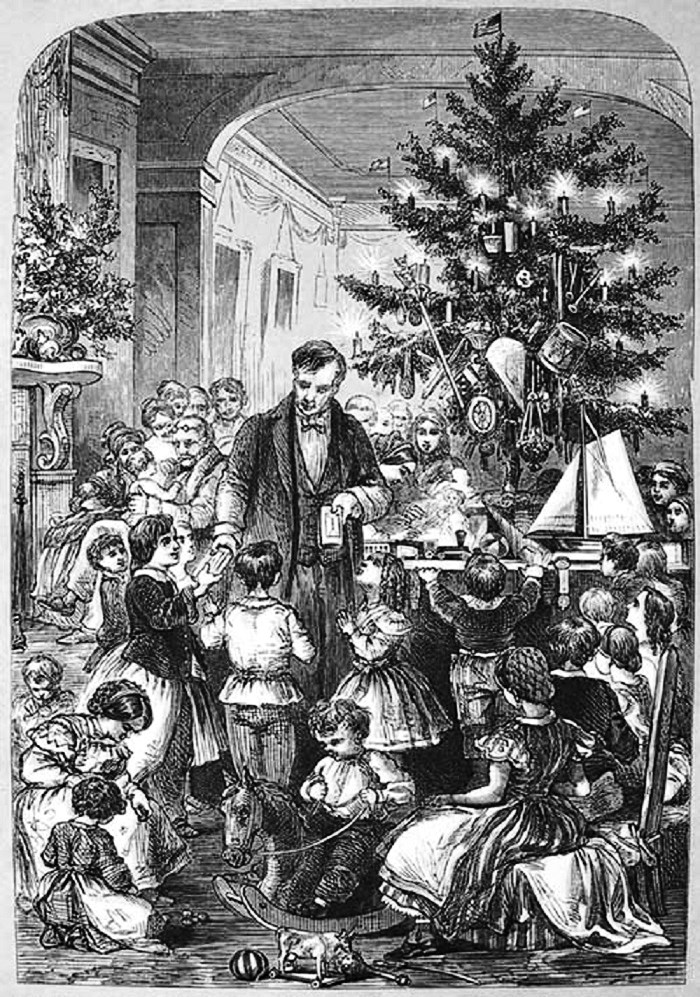 Illustration by F.A. Chapman, titled "The Christmas Tree," from the 1866 edition of Christmas Poems and Pictures. 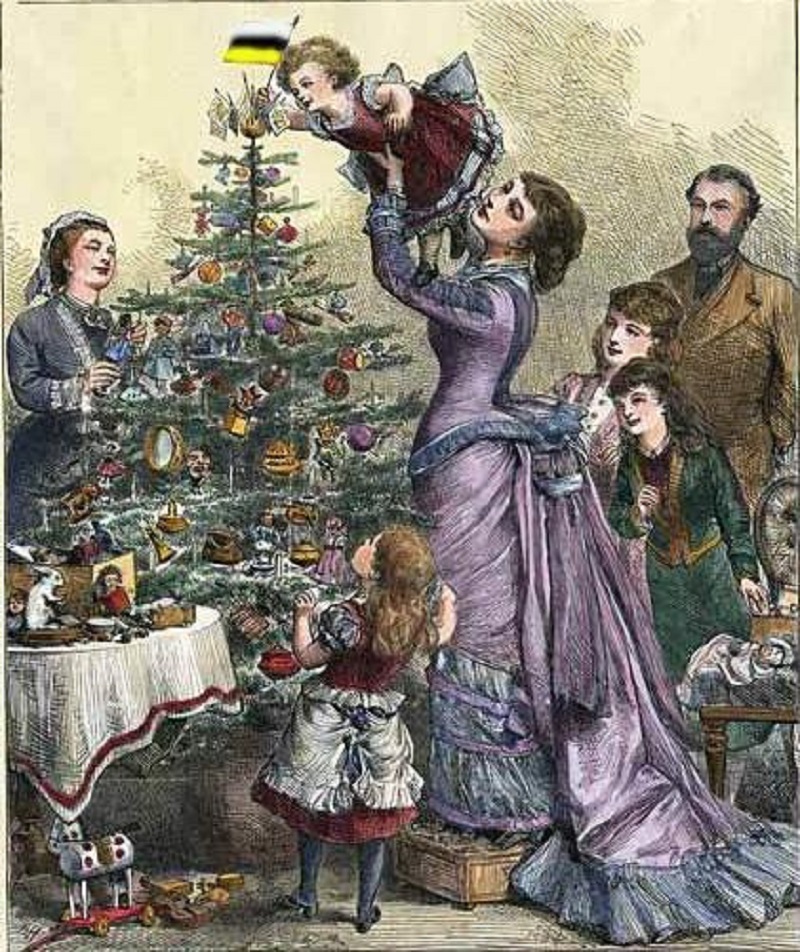 The Christmas Tree at the Middlesex Hospital. 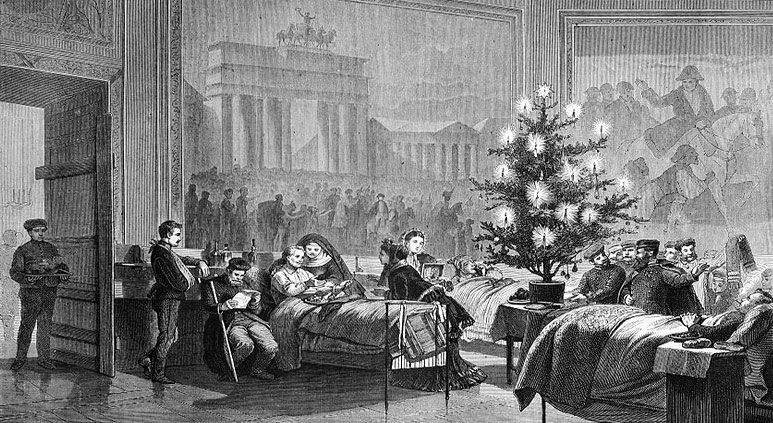 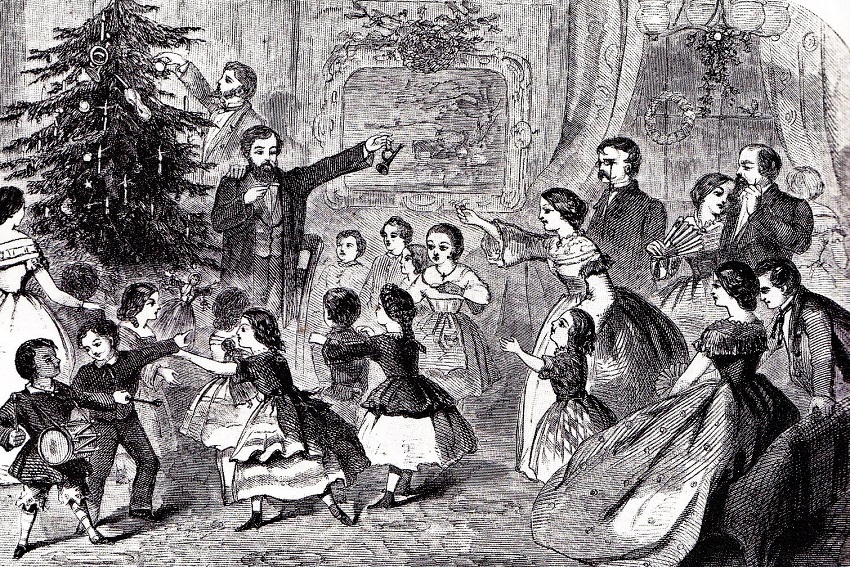 This image by Winslow Homer, is titled "The Christmas-Tree." It appeared in Harper's Weekly, December 25, 1858. 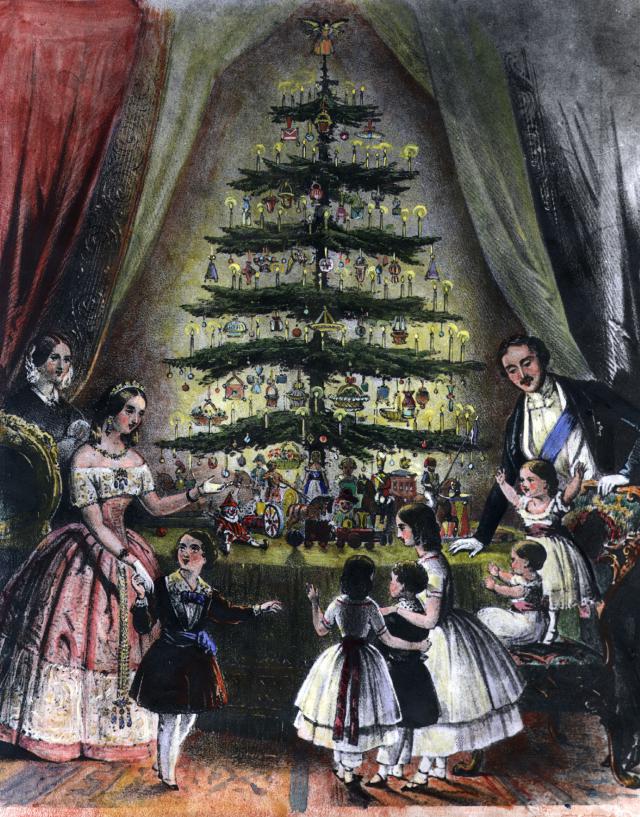 Queen Victoria, Prince Albert, & their family from the 1848 Illustrated London News.  In 1847, Prince Albert wrote: "I must now seek in the children an echo of what Ernest (his brother) & I were in the old time, of what we felt & thought; & their delight in the Christmas-trees is not less than ours used to be." He would decorate the trees himself with sweets, wax dolls, strings of almonds & raisins, & candles, which were lit on Christmas Eve for the distribution of presents, relit on Christmas Day, after which the tree was then moved to another room until Twelfth Night (January 6).  The Queen's journal of 1850 describes the scene: 'We all assembled & my beloved Albert first took me to my tree & table, covered by such numberless gifts, really too much, too magnificent."  "The 7 children were taken to their tree, jumping & shouting with joy over their toys & other presents; the Boys could think of nothing but the swords we had given them & Bertie of some of the armour, which however he complained, pinched him!"  Victoria, however, was familiar with the custom, which had been introduced by her grandmother, Queen Charlotte, the wife of George III, in 1800. The decoration and 'lighting up' of the Christmas tree was a central feature of Princess Victoria's childhood Christmases. In her journal for Christmas Eve 1832, the delighted 13-year-old Princess wrote: "After dinner...we then went into the drawing-room near the dining-room...There were two large round tables on which were placed two trees hung with lights and sugar ornaments. All the presents being placed round the trees..." That tree had been erected at Kensington Palace by Queen Adelaide, consort of King William IV. 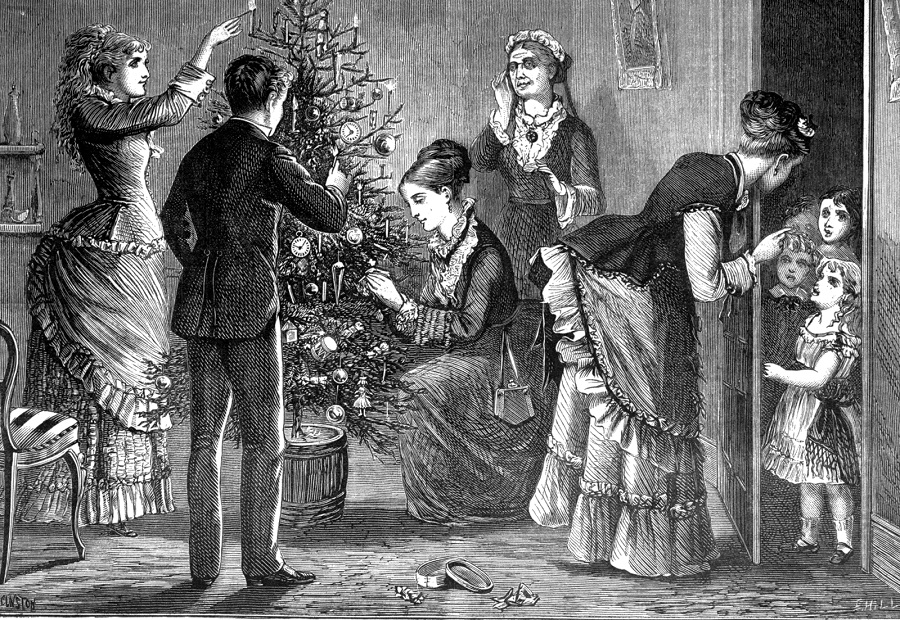 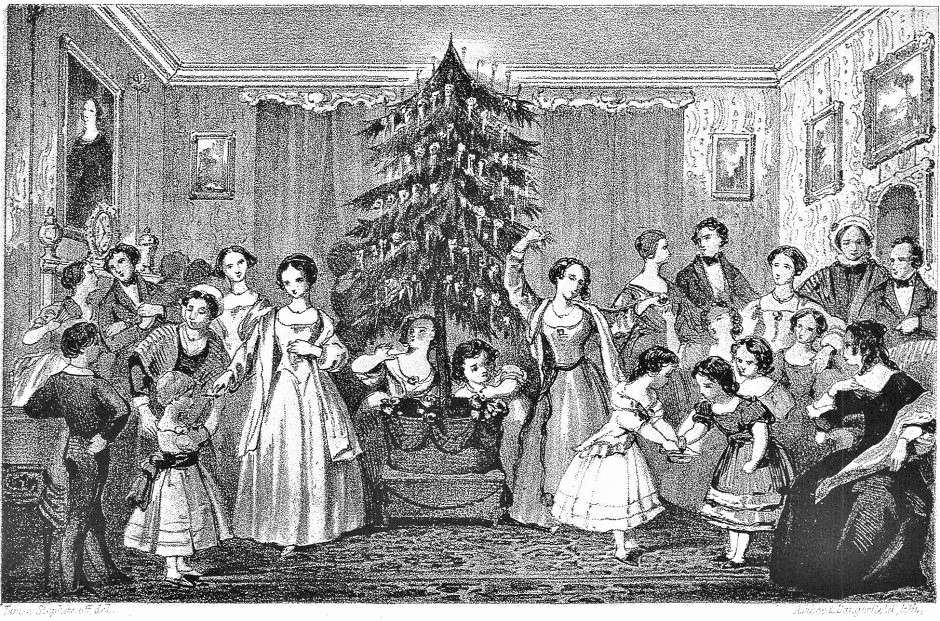 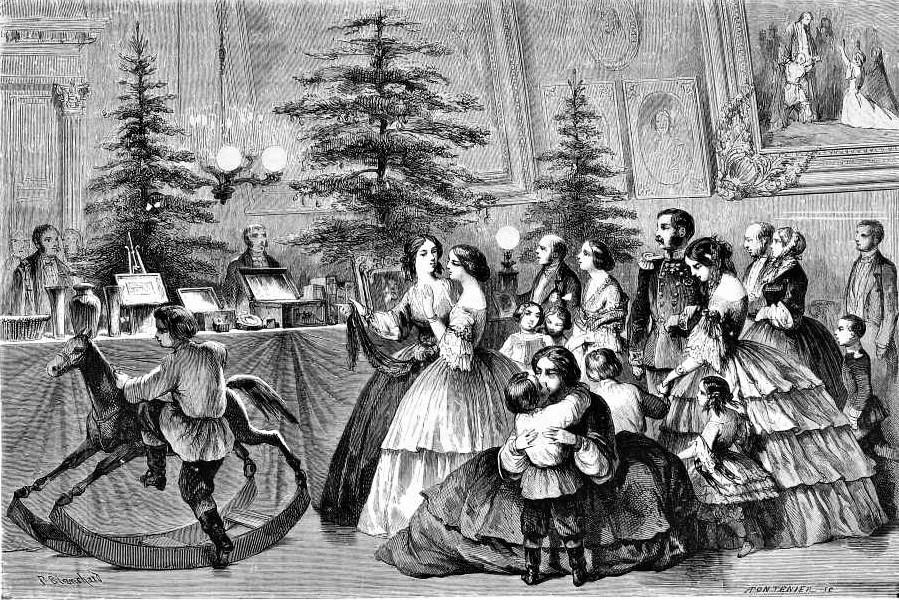 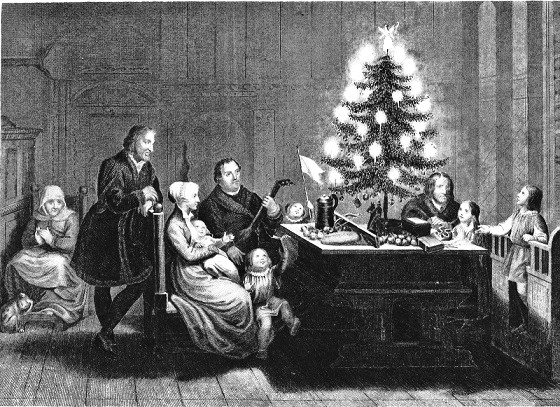 Some traditions credit Martin Luther with the 1st Christmas tree. Here, Luther & his Family in Wittenberg at Christmas 1536 in Wheat Sheaf  as imagined in 1853 Philadelphia

In the early part of the 19C, many Americans found Christmas trees an oddity. To the New England Puritans, Christmas was sacred. That stern solemnity continued until the 19C, when the influx of German & Irish immigrants overwhelmed the Puritan legacy. 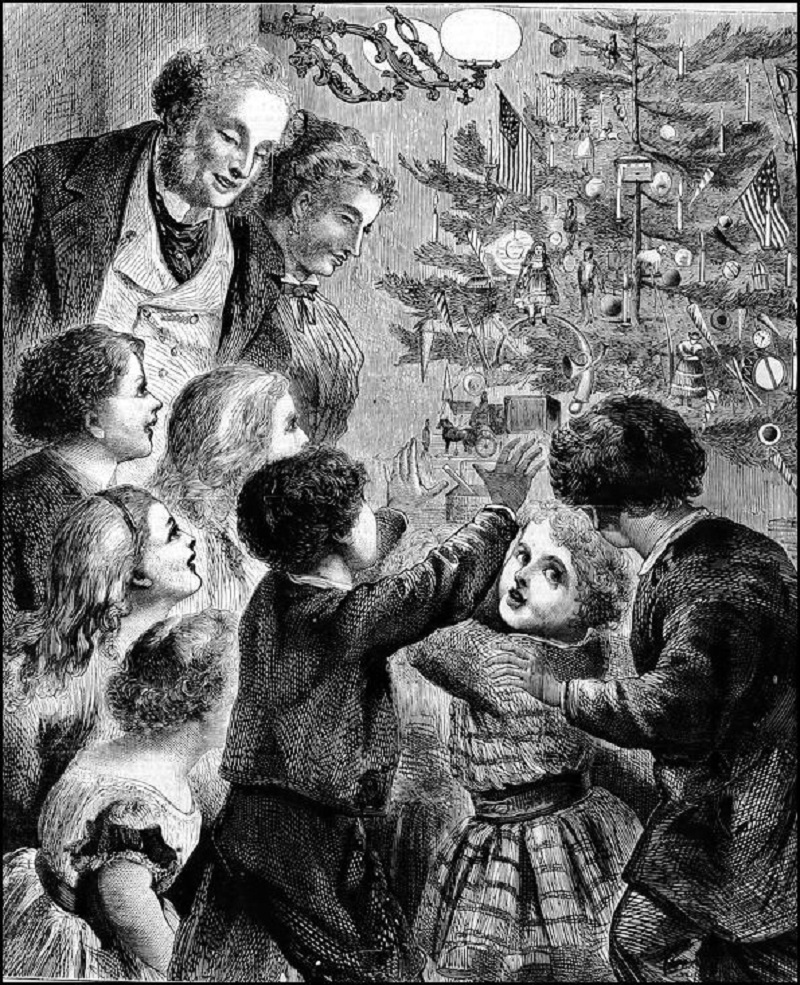 By the 1890s Christmas ornaments were arriving in the United States from Germany & as Christmas tree popularity was on the rise around the U.S. Generally Europeans used small trees about 4' in height, while Americans eventually came to prefer their Christmas trees to reach from floor to ceiling. 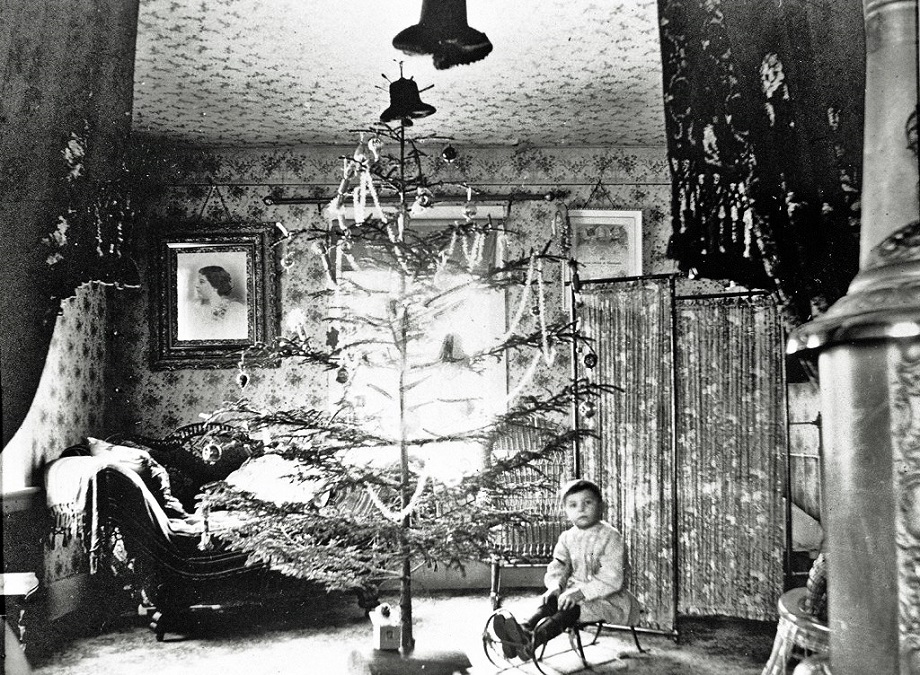 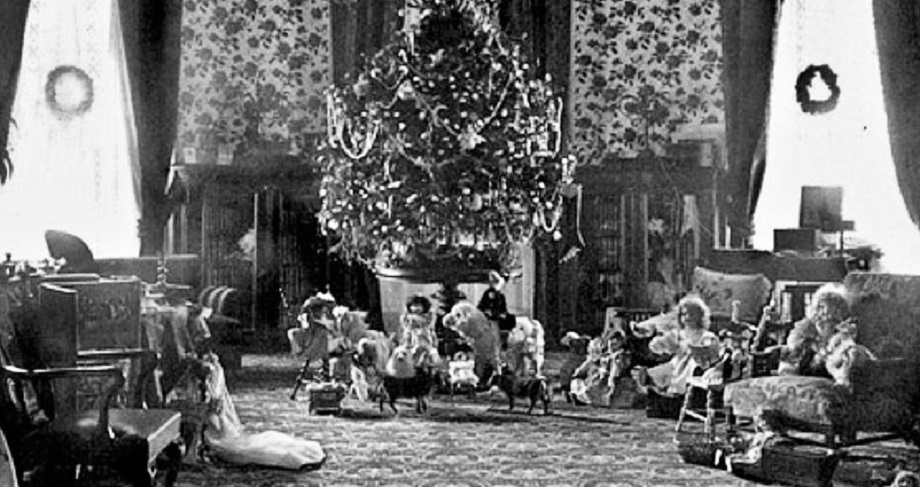 The first electric lights on a White House family tree were used in 1894 during the presidency of Grover Cleveland.
Posted by Barbara Wells Sarudy at 4:00 AM