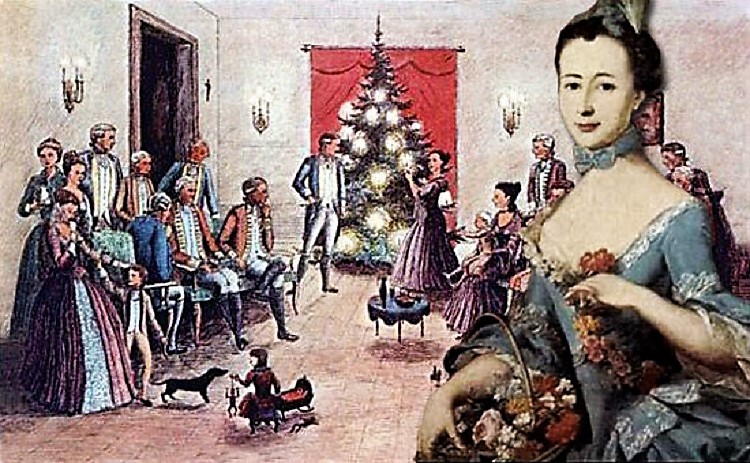 Lots of folks use the day after Thanksgiving to begin to gather together their Christmas decorations.  The earliest evidence of an illuminated Christmas tree in North America comes from the diary of Friederike von Riedesel, the wife of Major-General Friedrich Adolphus von Riedesel, Baron of Lauterbach, who was born in Lauterbach, Hessen, in 1738.  In 1776, he landed in Quebec with his German troops whose services the British had bought from their German prince to help them put down the American Revolution.

A year later, in 1777, his wife Friederike, accompanied by 2 young children & pregnant with another, sailed across the stormy Atlantic to be with her husband in the New World. She wrote many letters & made daily entries into a diary in which she detailed everyday life in North America in the turbulent colonial period. Her diaries are now in possession of the National Archives of Canada in Ottawa.

Friederike’s outgoing personality earned her many friends among the British & German officers, their wives, & servants. She was affectionately known as “Lady Fritz."  In those days officers as well as soldiers’ wives sometimes accompanied their menfolk into battle. When Baron von Riedesel was ordered to New York State in support of the British, she went along too. After the British & their German auxiliaries suffered a degrading defeat at Saratoga, both the Baron & Friederike as well as their children were captured by the Americans. They spent 2 years in the United States as nominal prisoners-of-war.  Since they were treated decently, they voluntarily remained in the new republic for another 2 years. Here, too, Friederike made many new friends.

In September of 1781, at the request of Swiss-born Governor General Haldimand, the von Riedesels returned to Lower Canada (Quebec) where the general was posted to Sorel.  Just before Christmas they moved into their new home on the site of the Maison des Gouverneurs (Governor’s Mansion) which is located at the confluence of the St. Lawrence & Richelieu Rivers.

In Germany on Christmas Eve, families gathered around a candle lit Christmas tree to sing beloved carols & exchange modest gifts. On Christmas Day, they enjoyed a succulent goose dinner & celebrated with an array of special baked goods & drinks. Such was the scene in the Governor’s mansion in Sorel. Christmas Eve 1781, as described by Lady Fritz in her diary.

The Riedesels left for Germany in 1783. The Riedesels had a total of 9 children, of which 6 survived past their 1st year. After a further campaign in the Netherlands from 1788 to 1793, General Riedesel died in 1800. Frederika returned to Berlin & published her journals from the war that same year. Her book became an important account of the Saratoga Campaign. Baroness Riedesel died in March 1808 in Berlin.
Posted by Barbara Wells Sarudy at 4:00 AM