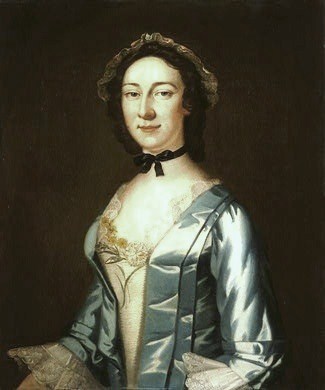 Mary Walton's (1727-1794) father was merchant Jacob Walton who had married Maria Beekman, daughter of Dr. Gerardus Beekman. On September 24, 1749, Mary Walton & Lewis Morris III (1726-1798) married. He was the eldest son of Lewis and Catherine (Staats) Morris. They had 10 children, 6 sons and 4 daughters: Catherine, Mary, Lewis, Jacob, Sarah, William, Helena, James, Staats, and Richard. Sons, Lewis, Jacob, and Richard fought in the Revolutionary War, and son William served as aide-de-camp to General Anthony Wayne. Active in civic affairs, Lewis Morris signed the Declaration of Independence risking his family home. When warned by his brother of the consequences that would follow his signing of the rebellious document, Morris stated, “Damn the consequences, give me the pen!”

The British did, indeed, burn more than 1,000 acres of their woodland, ransacked his house, forced his family to flee for their safety, captured his livestock, dispersed his domestics & tenants. After the Revolution, Morris returned home and attempted to renew his property & his finances. In 1783 Lewis sent a letter to the Continental Congress recommending that his property in the South Bronx "Morrisania" dating back to 1670, be made capital of the United States.
Posted by Barbara Wells Sarudy at 4:00 AM