Amelia Simmons. American Cookery, or the art of dressing viands, fish, poultry, and vegetables, and the best modes of making pastes, puffs, pies, tarts, puddings, custards, and preserves, and all kinds of cakes, from the imperial plum to plain cake: Adapted to this country, and all grades of life. By Amelia Simmons, an American orphan. Hartford: Printed for Simeon Butler, Northampton, 1798. 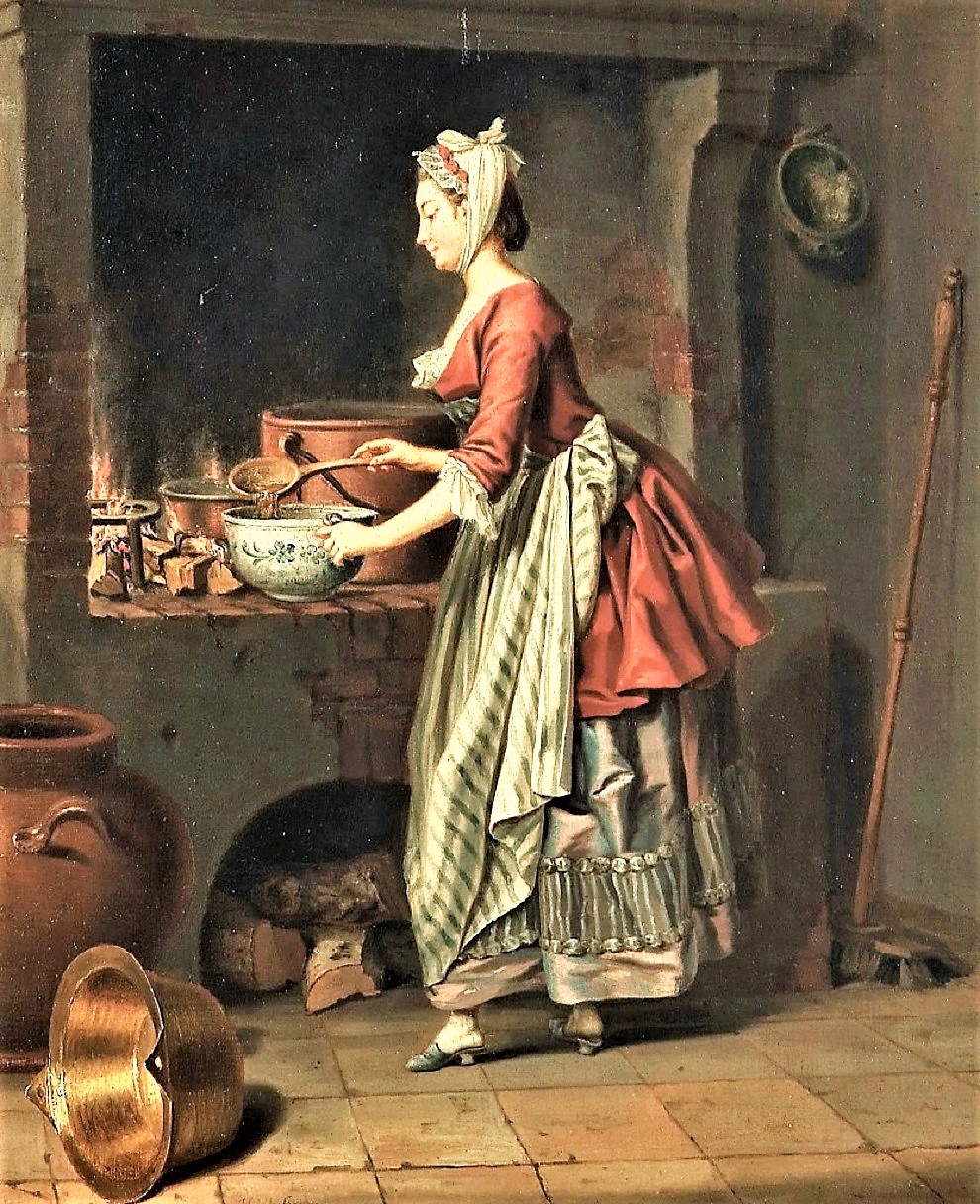 American Cookery, by Amelia Simmons, was the first known cookbook written by an American, published in Hartford, Connecticut in 1796. Until then, the cookbooks printed and used in the Thirteen Colonies were British. Very little is known of Amelia Simmons, the author of the first American cookbook. She seems to have appeared for the publication of American Cookery and then disappeared back into obscurity.

There may be a faint clue to her identity in the title page reference to herself as an "American Orphan," followed by a discussion of the trials of orphanhood in the preface. She may have been unmarried, had little education, and was quite possibly illiterate. She writes of "those females who have parents, or brothers, or riches," and how female orphans may be "reduced to the necessity of going into families in the line of domestics," from which one may infer that she was employed as a cook.

Her lack of education evidently led to some intrigue and a loss of control over the book's content: two different versions of the first edition appeared in 1796, the second of which is supplemented by what food historian Mary Tolford Wilson describes as "a sheet of obviously dissimilar paper" on which is printed an "Advertisement." It states:

"The author of American Cookery, not having an education sufficient to prepare the work for the press, the person that was employed by her, and entrusted with the receipts, to prepare them for publication, (with a design to impose on her, and injure the sale of the book) did omit several articles very essential in some of the receipts, and placed others in their stead, which were highly injurious to them, without her consent-which was unknown to her, till after publication.

"She then lists the corrections to the specific recipes. In Rice Pudding No. 2, for example, just 1/2 pound of butter and eight eggs should be used, not 1 pound butter and 14 eggs as originally stated. (Note: If you check her Rice Pudding No. 2 recipe in this 1798 edition, as well as the other recipes she cites as erroneous, you will find the errors remain uncorrected. Unfortunately for the users of her books as well as for Amelia Simmons's reputation, her attempts at rectification never completely caught up with the printings of her original recipes," writes Wilson in her introduction to the 1958 facsimile of the 1796 first edition, which does contain the list of errata and corrections.)

To make matters worse, when the second edition of American Cookery was published (not in 1800, as commonly noted, but in 1796, as per the findings of bibliographer Eleanor Lowenstein), Simmons claimed to have been shocked to find material in the first edition that she did not write, and had not authorized.

Nearly the whole of seventeen pages in the first edition, was filled with rules, and direction, how to make choice of meats, fowls, fish, and vegetables: this is a matter, with which, the Authoress does not pretend to be acquainted, much less to give directions to others; nor does she consider any way connected, with that branch which she has undertaken which is, simply to point out the most eligible methods of preparing those various articles for the tables when procured. This was done by the transcriber, without her knowledge or consent; and may with propriety be considered as an affront upon the good sense of all classes of citizens.

She goes on to say that her audience, whether city or country folk, know the difference between good and bad market produce, and do not need a guide for such matters. This sentiment may seem puzzling to a modern audience which will find the first seventeen pages of American Cookery (included in this 1798 first edition, of course) to be an informative, useful guide similar to passages found in modern cookbooks as well as cookbooks from the nineteenth century. It apparently, however, was not the work of Simmons.

Although she may not have been an authority at judging market meats, fish and produce, her book certainly establishes Simmons as a skillful cook: as food historian Karen Hess points out, she often calls for a variety of herbs in her cooking, as well as wine, and sets down "extraordinarily fine roasting techniques, English techniques that were admired even by the French." Since English culinary tradition formed the basis of early American cooking, this naturally follows; colonists brought over family recipes (and the well-to-do would ship bound cooking books) from England, and had no opportunity to purchase an American-published cookbook until 1742, when a Williamsburg printer, William Parks, published an American edition of the British cookbook, The Compleat Housewife. Though Smith excluded recipes with ingredients unavailable in America, the chosen recipes continued the same English tradition of cooking.

When, in 1772, Susannah Carter published The Frugal Housewife in Boston, she made no concession for American ingredients or habits. Although Simmons "borrowed" heavily from Carter, copying word for word her entire section on creams and syllabubs, she incorporated common early American foods - cornmeal, pumpkins, and molasses -- into these English traditions. Most notably, she was the first cookbook author to use the leavening agent pearl ash, which is derived from leaching large amounts of wood ash, and was common in early America because of the proliferation of timber operations.

Where was Amelia Simmons' home? Some say Hartford, since the book was first published there. In late Colonial times, however, the Albany area was a center for the production of potash, i.e., the unrefined source of the pearl ash used in Simmon's recipes. Hess, seeing this as a clue, suggests Simmons may be from the Albany area or somewhere in the Hudson River Valley. Though American Cookery was initially published in Hartford, the second edition was published in Albany in the same year. Several later places of publication centered around the Hudson River Valley, namely one in Albany in 1804, Troy in 1808, Poughkepsie in 1815 and New York in 1822.

Though other copies hailed from other locales, this cluster of publishers may suggest a meaningful connection with the author. Hess also points out that American Cookery uses a number of Dutch words common to the Hudson River area at that time. These words are slaw, from sla, meaning salad, and cookey, from koekje, meaning cookie (the British would use the phrase "small cake.")

Finally, there is the question of whether Simmons made money from this book. Though it is impossible to say, she may have been a shrewd, business-minded author who founded a marketing strategy with the words of her title: "Adapted to this Country, and All Grades of Life." Not only was this the first cookbook to incorporate popular and plentiful American foods into a traditional cookbook, but it was affordable to many. It sold for two shillings and threepence (the equivalent of about $1.75 today), and contained just 47 octavo pages printed on durable rag paper.

The first edition was published "For the Author." which probably meant that Simmons paid the printing costs and kept the sales profits and the publication rights. The book did sell well, for Simmons writes in the 1796 second edition preface that "the call has been so great, and the sales [of American Cookery] so rapid that [the author] finds herself not only encouraged but under a necessity of publishing a second edition."

The second edition was widely reprinted but some were possibly unauthorized, because Amelia Simmons' name did not always appear on the title page. Then there were the outright piracies of the work, like the 1805 book, New American Cookery . . . By an American Lady, published in New York, which tacked on some original material, and the 1819 book, Domestic Cookery by Harriet Whiting, which was published in Boston and was devoid of any new material, not even the corrections Simmons called for back in 1796. It is fair to say that Simmons probably made some money, and was probably cheated of some money too. Her book remains an historical marker in American cookery, just as her life story remains a question mark in American biography.

Simmons, Amelia. American Cookery, or the art of dressing viands, fish, poultry, and vegetables, and the best modes of making pastes, puffs, pies, tarts, puddings, custards, and preserves, and all kinds of cakes, from the imperial plum to plain cake: Adapted to this country, and all grades of life. By Amelia Simmons, an American orphan. Hartford: Printed for Simeon Butler, Northampton, 1798.