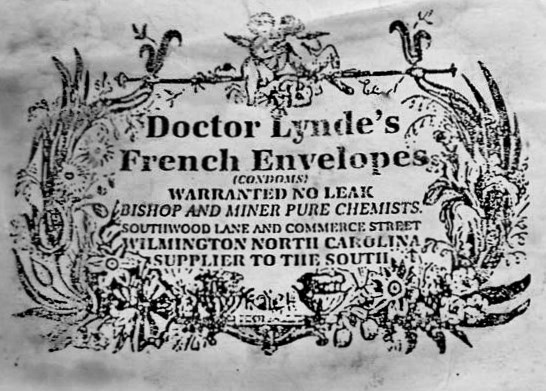 Birth control has existed at least since the Egyptian era, when people created their own barrier methods or suppository mixtures made of natural elements like honey or seaweed.  It is known that around 1000 BC the ancient Egyptians also used a linen sheath for protection against disease.  From 100 - 200 AD, the earliest evidence of condom use in Europe comes from scenes in cave paintings at Combarelles in France.

The 1st well-documented outbreak of what is now known as syphilis occurred in 1494, among French troops, and the syphilis epidemic spread across Europe. In 16C Italy, Gabriele Falloppio authored an early description of condom use. De Morbo Gallico ("The French Disease," referring to syphilis) was published in 1564. In this tract, he recommended use of a device he claimed to have invented: linen sheaths soaked in a chemical solution and allowed to dry before use. These were the first spermicides on condoms.  The cloths he described were sized to cover the glans of the penis, & were held on with a ribbon. Having been found useful for prevention of infection, it was only later that the usefulness of the condom for the prevention of pregnancy was recognised.

The word "condom" appeared in a 1706 English poem by J. Hamilton. By 1717, it was being touted as "The Condum being the best, if not only Preservative our Libertines have found at present." against syphilis.  In the 18C, condoms made out of animal intestines began to be available.  Slaughterhouses discarded an abundance of animal organs, butchers made extra money by repurposing intestines as preventive sheaths, making them the first widely sold contraceptive product. Since the livestock industry was much larger in Europe, most of these “skins,” as they were called, had to be imported to the British America colonies from England or France.

In a 1728 English book called Cupid's Metamorphoses, stated that "Happy the Man, who in his Pocket keeps, Whether with Green or Scarlet Ribband bound, A well made Condom."   By 1744, the advice in a book called My Secret Life X was "let not the Joy she proffers be Essay'd, Without the well-trye'd Cundum's friendly Aid."  However, they were quite expensive and the unfortunate result was that they were often reused. This type of condom was described at the time as "an armour against pleasure, and a cobweb against infection."  In the 2nd half of the 1700's, a trade in handmade condoms thrived in London and some shops where producing handbills & advertisements of condoms.  Long before the advent of the birth control pill, these condoms became the most effective, affordable, &  accessible form of contraception.

Condom production increased in America after 1839, when Charles Goodyear’s method of rubber vulcanization kick-started modern latex technologies in the United States. By 1870, condoms were available through almost any outlet you can imagine–drug suppliers, doctors, pharmacies, dry-goods retailers &  mail-order houses. Sexual products were openly sold &  distributed during much of the 19th century. Then in 1873, Congress passed the Comstock Act, which paralyzed the growing industry; Comstock made it illegal to send any “article of an immoral nature, or any drug or medicine, or any article whatever for the prevention of conception” through the mail.

Jim Edmonson, chief curator at the Dittrick Medical History Center, explains that the law was passed primarily because of a vicious campaign by its namesake, Anthony Comstock. “He was a do-gooder, a reformer, &  a religious-minded person,” says Edmonson. “Comstock had been to the Civil War, &  was outraged by the sexual excess of soldiers–large numbers of men away from home &  church–and the women who made their trade with these soldiers. Comstock felt that condoms &  any other forms of contraception were just a license to sexual excess.”

Ostensibly designed to prevent the sale of obscene literature &  pornography, the Comstock Act effectively made any form of contraception illegal in the United States, punishable as a misdemeanor with a six-month minimum prison sentence. “So we had a national law criminalizing contraception,” says Edmonson.

In a time before chain stores &  online shopping, mail-order catalogs were all the rage, allowing millions of folks scattered across the countryside to purchase items made in urban areas, like condoms. Though the Comstock Act added to pre-existing regulation of “obscene” mail, it effectively closed certain loopholes &  incorporated almost any product you can imagine. Contraceptives were one of the new additions.

Opposition to condoms did not only come from moralists.  By the late 19C the feminist movement in both Europe & America was decidedly anti-condom. Feminists wanted birth control to be exclusively in the hands of women, & disapproved of male-controlled methods such as the condom.

As a result, condoms went underground. In her book Devices and Desires, Andrea Tone observes that instead of ceasing production, “purveyors disguised their products through creative relabeling.” Tone points out that despite the legal issues, “Classified ads published in the medical, rubber, &  toilet goods sections of dailies &  weeklies indicate a flourishing contraceptive trade in post-1873 America. The hitch was that contraceptives were rarely advertised openly as preventives.” Instead condoms were sold as sheaths, skins, shields, capotes, &  “rubber goods” for “gents.” 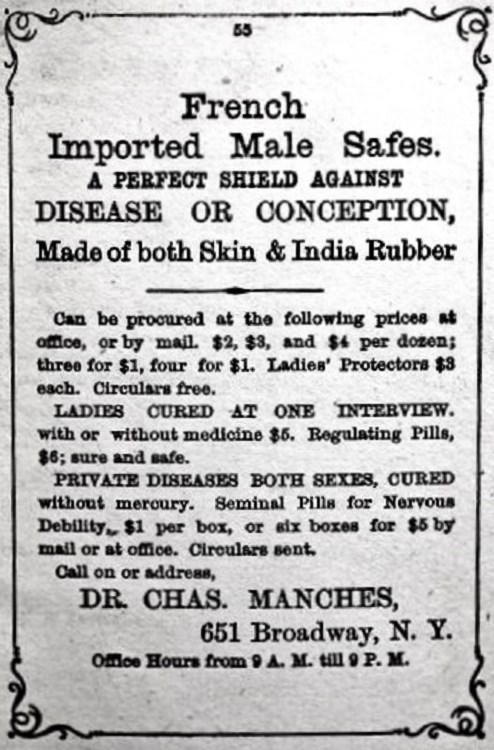 Though Comstock pursued those on both the manufacturing &  distribution ends of the contraceptive trade, smart entrepreneurs realized they were safe if the court had no clear evidence of their intention to prevent pregnancy. Although the transmission of venereal disease was not completely understood, germ theory was beginning to take root in the scientific community, so emphasizing this other medical use for birth-control products gave the industry good cover. Tip-toeing around the topic of contraception, ads relied on words like “protection,” “security,” &  “safety,” phrases which Andrea Tone calls “legal euphemisms.”

Despite social and legal opposition, at the end of the 19C the condom was the Western world's most popular birth control method. Two surveys conducted in New York in 1890 & 1900 found that 45% of the women surveyed were having their partners use condoms to prevent pregnancy.

See
The Covert History of the American Condom
By Hunter Oatman-Stanford — August 16th, 2012 in Collectors Weekly
Posted by Barbara Wells Sarudy at 4:00 AM