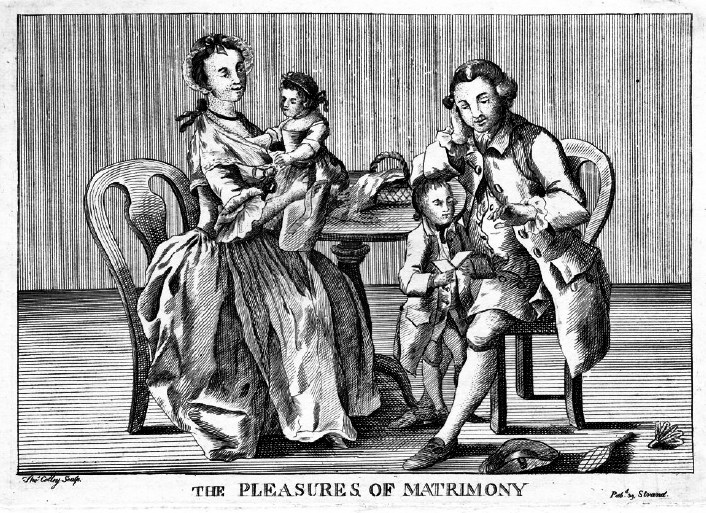 The Pleasures of Matrimony by Thomas Colley 1773

Abigail Abbot (1746-1815) & Asa Bailey (1745- c 1815-25) of New Hampshire had been married in 1767; farmed; & produced 14 children over their 25 years of marriage. During that time, Asa also fought in the Revolution; had an affair; raped a servant; beat his wife; & had incest with his 17 year-old daughter. They finally divorced in 1793.  Her own words--
One result of all my examinations and prayers was, a settled conviction, that I ought to seek a separation from my wicked husband, and never to settle with him any more for his most vile conduct. But as sufficient evidence, for his legal conviction, had not yet offered itself, (though I as much believed his guilt, as I believed my own existence,) I thought God’s time to bring Mr. B.'s conduct to public view had not yet arrived. But I was confident that such a time would arrive; that God would bring his crimes to light; and afford me opportunity to be freed from him.

Several months had passed, after Mr. B’s last wicked conduct before mentioned, and nothing special took place. The following events then occurred. One of our young daughters, (too young to be a legal witness, but old enough to tell the truth,) informed one of her sisters, older than herself, what she saw and heard, more than a year before, on a certain sabbath. This sister being filled with grief and astonishment at what she had heard, informed her oldest sister. When this oldest sister had heard the account, and was prepared to believe it, (after all the strange things which she herself had seen and heard,) she was so shocked, that she fainted. She was then at our house, I administered camphire, and such things as were suitable in her case. She soon revived. She then informed me of the occasion of her fainting. I had long before had full evidence to my mind of Mr. B’s great wickedness in this matter; and I thought I was prepared to hear the worst. But verily the worst was dreadful! The last great day will unfold it. I truly at this time had a new lesson added, to all that ever I before heard, or conceived, of human depravity.

I was now determined to go and see the daughter, who had suffered such things. Mr. B. perceiving my design to go where she was, set himself to prevent it. But kind Providence soon afforded me an opportunity to go. She was living at the house of her uncle, a very amiable man, and one whom Mr. B. in his better days, esteemed most highly; but of whom he became very shy, after he abandoned himself to wickedness. Mr. B. now could not endure the thought of my going to his house. No doubt his guilty conscience feared what information I might there obtain, and filled him with terror.

With much difficulty, and by the help of her aunt, I obtained ample information. I now found that none of my dreadful apprehensions concerning Mr. B’s conduct had been too high. And I thought the case of this daughter was the most to be pitied of any person I ever knew. I wondered how the author of her calamities could tarry in this part of the world. I thought that his guilty conscience must make him flee; and that shame must give him wings, to fly with the utmost speed.

My query now was, what I ought to do? I had no doubt relative to my living any longer with the author of our family miseries. This point was fully settled. But whether it would be consistent with faithfulness to suffer him to flee, and not be made a monument of civil justice, was my query. The latter looked to me inexpressibly painful. And I persuaded myself, that if he would do what was right, relative to our property, and would go to some distant place, where we should be afflicted with him no more, it might be sufficient; and I might be spared the dreadful scene of prosecuting my husband.

I returned home, I told Mr. B. I had heard an awful account relative to some man. I mentioned some particulars, without intimating who the man was; or what family was affected by it. I immediately perceived he was deeply troubled! He turned pale, and trembled, as if he had been struck with death. It was with difficulty he could speak. He asked nothing, who the man was, that had done this great wickedness; but after a while said, I know you believe it to be true; and that all our children believe it; but it is not true! Much more he said in way of denying. But he said he did not blame me for thinking as I did.

He asked me, what I intended to do? I replied, that one thing was settled: I would never live with him any more! He soon appeared in great anguish; and asked what I could advise him to do? Such was his appearance, that the pity of my heart was greatly moved. He had been my dear husband; and had destroyed himself. And now he felt something of his wretchedness.

I now felt my need of christian fortitude, to be firm in pursuing my duty. I was determined to put on firmness, and go through with the most interesting and undesirable business, to which God, in his providence, had called me, and which I had undertaken. I told him his case to me looked truly dreadful and desperate. That though I had long and greatly labored for his reformation and good, yet he had rejected all my advice. He had felt sufficient to be his own counsellor; and now he felt something of the result of his own counsels.

Relative to his question, what he now should do? I told Mr. B. he knew something of my mind, from an interview upon the subject sometime since, when he proposed retiring to some distant region, and forever leaving me and his family. I informed him, I now could see no better way for him than this; that I had rather see him gone forever, than to see him brought to trial, and have the law executed upon him, to the torture of myself and family; as it would be, unless he prevented it by flight.

He was then full of his consultations, relative to the mode of his going;—whether to ride, or go on foot? what property to take? and similar queries. I let him know that I was willing he should ride, and not only take a horse, but take property enough to make him comfortable. I proposed he should turn a one hundred acre lot, which we could well spare, and take the avails of it.

Source: Abigail Abbot Bailey, Memoirs of Mrs. Abigail Bailey, Who Had Been the Wife of Major Asa Bailey, Formerly of Landaff, (N.H.) Written by Herself Ed. Ethan Smith. (Boston: Samuel T. Armstrong, 1815)
Posted by Barbara Wells Sarudy at 4:00 AM