Anne Catharine Hoof Green (c. 1720-1775), “printer to the Province” of Maryland from 1767, until her death, was apparently born in Holland, & brought to Pennsylvania as a small child. On April 25th, 1738, she married in Christ Church, Philadelphia, to Jonas Green, a journeyman printer from Boston, whose family had been prominent in the trade since the mid-17th century. Green, who had found employment in Philadelphia with Benjamin Franklin & Andrew Bradford, moved by the following October to Annapolis, Md., where he soon became printer for the Province of Maryland. Beginning in 1745, Green became publisher of the weekly Maryland Gazette, one of the earliest colonial newspapers. He was also register of St. Anne’s Church (Anglican), an alderman of the city of Annapolis, & postmaster. He made his political mark in his fight against the Stamp Act. 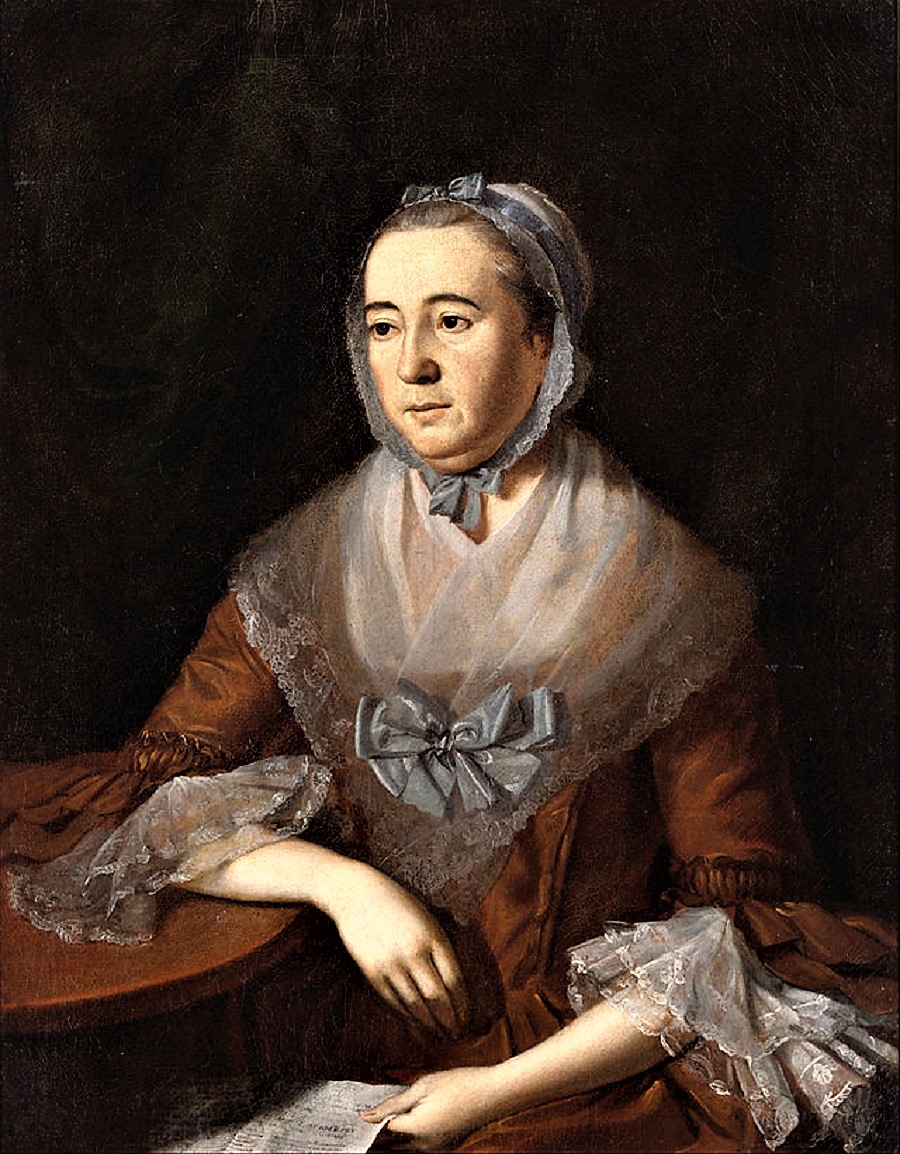 1769 Anne Catharine Hoof Green 1720–1775) Printer & Publisher by Charles Willson Peale, (1741-1827) The words "ANNAPOLIS Printer to . . . ," which appear on the paper held by Green, are a reference to the fact that the Maryland legislature had chosen her to succeed her husband as the colony's official printer.

In her husband's newspaper, Mrs. Green occasionally advertised the sale of "Choice good Coffee” & “very good Chocolate” at the post office, which was evidently their home. In Annapolis, the Green's rented a house on Charles Street. At the time it was a small 2 story house with a kitchen & 2 bedrooms. During the early 1740s, the owner of the house expanded the property to contain a print shop, post office, & room enough for the growing family.

The printing house was probably in a detached building. The following excerpt from Riley's Ancient City, p. 119, seems to give support to this supposition. Riley has been discussing the smallpox ravages in Annapolis in 1756 and 1757. "The family of Jonas Green," he writes, "was afflicted to such an extent that many of his customers were afraid to take the Gazette, lest they would catch the disease. Mr. Green, whilst he expressed a doubt as to paper carrying the disease, subsequently stated that people 'need not fear to catch the small-pox from the paper, as it was kept all the time a good distance from the house, and beside the disease was now eradicated from his premises.'"

She was probably taking an active part in the family printing business some time before 1767, for upon her husband’s death in that year her press produced the Acts & Votes & Proceedings of the Assembly of 1767 on schedule, & the Maryland Gazette continued without a break.On April 16, 1767, the following notice appeared in the Maryland Gazette: On Saturday Evening last died, at his late Dwelling-House, Mr. Jonas Green, for 28 years Printer to this Province, and 21 years Printer and Publisher of the Maryland Gazette: He was one of the Aldermen of this City. It would be the highest In-discretion in us, to attempt giving the character he justly deserved, only we have Reason to regret the Loss of him, in the various Stations of Husband, Parent, Master and Companion.

Immediately after the announcement of the death of her husband, Mrs Green wrote: "I Presume to address You," she wrote in an appeal to the public,"for your Countenance to Myself and numerous Family, left, without your Favour, almost destitute of Support, by the Decease of my Husband, who long, and, I have the Satisfaction to say, faithfully served You in the Business of Provincial Printer; and, I flatter myself, that, with your kind Indulgence and Encouragement, Myself, and Son, will be enabled to continue it on the same Footing...I am willing to hope, that the Pains taken by my late Husband, to oblige his very extensive Acquaintance, and the Character he deservedly bore, of an honest, benevolent Man, will recommend to your Regard, Your grateful and faithful humble Servant, A. C. GREEN.

On Jan. 7, 1768, shortly after his 21st birthday, the Maryland Gazette appeared under the name of Anne Catherine Green & William Green. With the death of William in August 1770, Frederick replaced him; on Jan. 2, 1772, when he was not quite 22, his services were recognized in the colophon as Anne Catherine Green & Son.  Mrs Green did not shy away from her new leadership role. Throughout the spring & summer of 1768, week after week the columns of her newspaper were filled with letters written by two angry Marylanders. The heated controversy was between "C. D." (Walter Dulany) and "The Bystander" (the learned but unscrupulous Bennet Allen, rector of St. Anne's Parish.) Finally, Mrs. Green & her son William refused to publish more letters of "The Bystander," unless the rector would indemnify them against suit & openly declare his identity. Allen declared that the Greens, as Jonas Green had been, were under the thumb of the Dulany family & complained strenuously of his exclusion from their newspaper, while his enemies were permitted still to use its columns.

Mrs. Green's son-in-law, John Clapham, came to the support of his wife's family in a long letter in the Maryland Gazette of September 22, 1768: "Mr. Allen's Treatment to Mrs. Green, left a widow, with large Family, he never can justify. On the 27th of May, he called at the Printing-Office, and endeavoured to intimidate her, by threatening to knock up her press, if ever she published any more pieces against him: Accordingly, next Morning, a Manuscript...was privately stuck up at the Door of the Stadt-House, the General Assembly then sitting, and the Office of Provincial Printer vacant, by which (tho' not intended) he did her real Service; for she was so happy, soon after, as to be unanimously chosen (printer for the province). It is generally supposed, had he acted a contrary Part, and given her a Recommendation to the Public, she wou'd not, for that very Reason, have received so general a Mark of Friendship and Approbation."

Jonas Green’s pay allowance as Maryland's public printer had terminated with his death. Finally, the Assembly voted that Mrs Green should be appointed to the position. She would be allowed the sum of "Nine hundred and forty-eight dollars and one half a dollar;" and further, that for her future services as public printer she receive 48,000 pounds of tobacco annually for those years in which there was a session of the Assembly, and 36,109 pounds of the current medium (tobacco) for the years in which no session was held. These were the same terms of payment as had been accorded to Jonas Green in the year 1765. Throughout her 8 years of service to the Province as public printer, Mrs. Green's allowance remained unchanged. In addition, the Assembly gave her the task of supplying “book Notes & Manifest” for the tobacco-inspection warehouses; & in 1770, she was paid for printing the bills of credit authorized by the Assembly of 1769.

She also published a yearly almanac & printed a few political pamphlets & some satirical works. Her most ambitious undertaking, apart from the newspaper & public business, was Elie Vallett’s Deputy Commissary’s Guide (1774), a book of 133 leaves detailing the procedures & forms to be used in probating wills & settling estates. Her issue of The Charter & Bye-Laws of the City of Annapolis has been described as “a beautifully printed little volume of fifty-two pages, which for typographical nicety could hardly have been surpassed by the best of her contemporaries in the colonies” (Wroth).

Until Aug. 20, 1773, when William Goddard began publishing in Baltimore of the Maryland Journal & Baltimore Advertiser, the Maryland Gazette was the only Maryland newspaper, & its role in reporting the political events leading to the Revolution was an important one.

Mrs. Green printed communications from the Northern colonies showing the increasing protest against the Townshend Acts & the establishment & success of no importation agreements. Through her columns John Dickinson’s Letters from a Pennsylvania Farmer reached the Maryland public. Accounts of the Boston Tea Party & the Boston Port Act of 1774 aroused great excitement. Green covered issues regarding independence, drawing upon local controversies. She covered was the famous, local Antilon/First citizen debate between Daniel Delaney & Charles Carroll. Carroll had argued for independent legislation & citizenship privileges.  By informing the people of plans & protests elsewhere as well as at home, the Maryland Gazette no doubt unconsciously helped to push the revolutionary cause. During such turbulent times a printing firm that depended heavily upon public business for its support might have made enemies it could ill afford. But Mrs. Green opened her columns to both sides to fan argument; & she was generally careful not to print libelous attacks on individuals, even when the authors were men of influence.

After her death (presumably in Annapolis) her son Frederick took over the business & continued to observe her rules, even though his comments & selection of materials reflected more & more radical views. During the Revolutionary War, from December 25, 1777, to April 30, 1779, the Maryland Gazette suspended publication. After its resumption, it continued to be published by sons & grandsons without interruption, until its final cessation 60 years later in 1839.

Little is known of Anne Catharine Green as a person. The Maryland Gazette’s obituary couched in the language of conventional praise, credits her with “a mild & benevolent Disposition” & exemplary “conjugal Affection” & “parental Tenderness.” As a printer & patriot, she excelled. Anne Green was an avid supporter of the Revolution & the Maryland Gazette consistently contained attacks on British Rule. The Maryland Gazette was the provinces only source of news during this period, and its pages were debated heavily. Under Anne's direction the paper became a force in the community, helping push the nation towards liberty and revolution. She made the Maryland Gazette a forum for discussion & a valuable, if not always impartial, source of information during a critical period in American history.