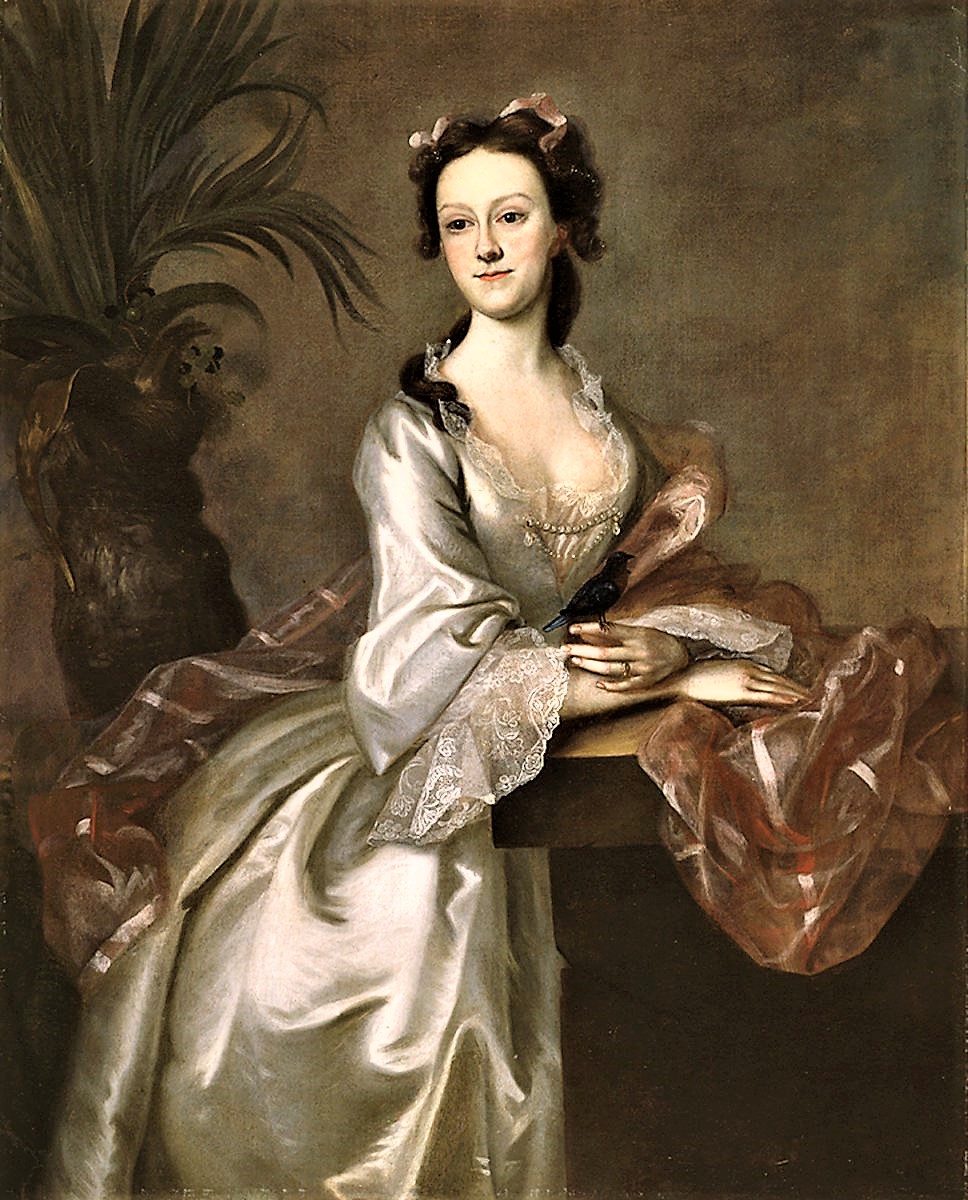 Before settling in New England for a decade (1753-63), artist Joseph Blackburn visited Bermuda, which had come under British domination in 1684 and was closely connected to the American mainland by trade routes. Here he painted at least 17 portraits, 7 devoted to the members of the family of Francis Jones, governor of the colony. Fannie, Francis Jones’s daughter, married Captain John Pigott by, a customs collector, in 1745. The British considered Bermuda an exotic locale, as Blackburn shows in this portrait of Mrs. Pigott by posing her in front of a palmetto with native bird perched on her finger.

Joseph Blackburn (1700-1780) was taught painting in the English Rocco portrait style & his specialty was painting elegant fabrics & fashions on gracefully portrayed sitters. Before he came to the British American colonies, he sailed first to Bermuda, where he spent 2 years painting portraits. He sailed from Bermuda searching for a broader client base in the growing Atlantic towns of the British American colonies.  He was painting actively in the colonies from 1754-1763. He arrived in Newport from Bermuda in 1754, and then traveled to Boston (1755-58), and on to Portsmouth (1758-62). He sailed for London in 1763. He arrived in his first colonial American port town with a letter of introduction from a locally known and respected member of genteel society. The 1754 letter of introduction from a family member of one of Blackburn's former clients addressed to friends in the artist's next port-of-call encourages both Blackburn's social acceptance and his employment.Joseph Blackburn's letter of introduction to Newport society, "I hope youl excuse the liberty I shall now take of recommending the bearer Mr Blackburne to your favor & friendship, he is late from the Island of Bermuda a Limner by profession & is allow’d to excell in that science, has now spent some months in this place, & behav’d in all respects as becomes a Gentleman, being possess’d with the agreeable qualities of great modesty, good sence & genteel behaviour he purposes if suitable encouragements to make some stay in Boston, and will be an entire stranger there...shall therefore be obliged to you or friends for any civilities you are pleased to shew him, my best Compliments...to your good lady Miss Sucky and Miss Nancy & who’s Pictures I expect to see in Boston drawn by the above Gent[lema]n."
Posted by Barbara Wells Sarudy at 4:00 AM