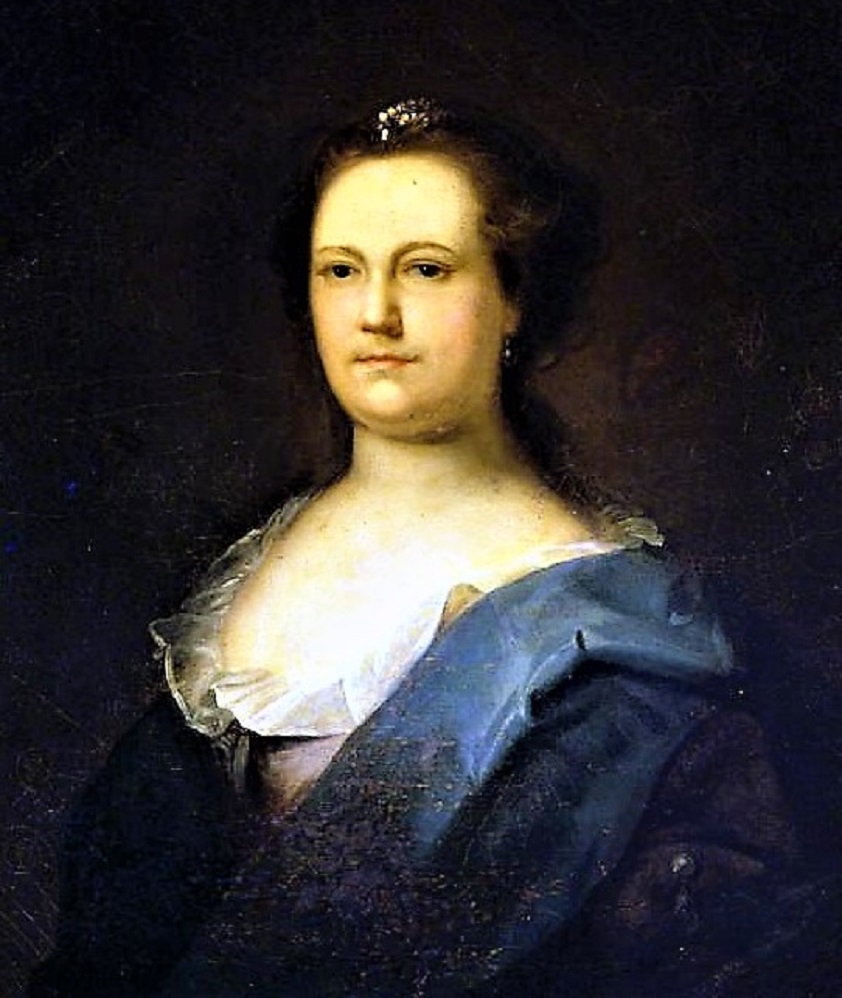 Deborah Read Franklin (c. 1708-1774)  was born to John & Sarah Read, a well respected Quaker couple. John Read was a moderately prosperous building contractor & carpenter who died in 1724. Read had three siblings: two brothers, John & James, & a sister, Frances. The Read family immigrated to English America in 1711, settling in Philadelphia.  Read met then 17-year-old Benjamin Franklin in October 1723, when he walked past the Read home on Market Street one morning.  Franklin had just moved to Philadelphia from Boston to find employment as a printer. In his autobiography, Franklin recalled that at the time of their meeting, he was carrying "three great puffy rolls." As he had no pockets, Franklin carried one roll under each arm & was eating the third. Read was standing in the doorway of her home & was amused by the sight of Franklin's "...most awkward ridiculous appearance." A romance soon developed. Claiming he was unable to find appropriate living accommodations near his job, John Read allowed Franklin to rent a room in the family home.  Read & Franklin's courtship continued &, in 1724, Franklin proposed to Read. However, Read's mother Mary would not consent to the marriage, citing Franklin's pending trip to London & financial instability. Read & Franklin postponed their marriage plans & Franklin traveled to England. Upon arriving in London, Franklin informed Read that he had no intention of returning to Philadelphia.

Read was then persuaded by her mother to marry John Rogers, a British man who has been identified variously as a carpenter or a potter. Read & Rogers were married on August 5, 1725. The marriage quickly fell apart as the "sweet talking" Rogers could not keep a job & incurred a large amount of debt before their marriage. Four months after they were married, Read left Rogers after a friend of Rogers visiting from England told Read, that Rogers had a wife back in England. Read refused to live with or recognize Rogers as her husband, as Rogers spent Read's dowry & incurred more debt.  In December 1727, Rogers stole a slave & disappeared. Soon after, unconfirmed reports circulated that Rogers had made his way to the British West Indies where he was reportedly killed in a fight.

Franklin returned to Philadelphia in October 1727. He explains in his autobiography: "But this affair having turned my thoughts to marriage, I look'd round me & made overtures of acquaintance in other places; but soon found that, the business of a printer being generally thought a poor one, I was not to expect money with a wife, unless with such a one as I should not otherwise think agreeable. In the mean time, that hard-to-be-governed passion of youth hurried me frequently into intrigues with low women that fell in my way, which were attended with some expense & great inconvenience, besides a continual risque to my health by a distemper which of all things I dreaded, though by great good luck I escaped it. A friendly correspondence as neighbors & old acquaintances had continued between me & Mrs. Read's family, who all had a regard for me from the time of my first lodging in their house. I was often invited there & consulted in their affairs, wherein I sometimes was of service. I piti'd poor Miss Read's unfortunate situation, who was generally dejected, seldom cheerful, & avoided company. I considered my giddiness & inconstancy when in London as in a great degree the cause of her unhappiness, tho' the mother was good enough to think the fault more her own than mine, as she had prevented our marrying before I went thither, & persuaded the other match in my absence. Our mutual affection was revived, but there were now great objections to our union. The match was indeed looked upon as invalid, a preceding wife being said to be living in England; but this could not easily be prov'd, because of the distance; &, tho' there was a report of his death, it was not certain. Then, tho' it should be true, he had left many debts, which his successor might be call'd upon to pay. We ventured, however, over all these difficulties, & I took her to wife, September 1st, 1730. None of the inconveniences happened that we had apprehended, she proved a good & faithful helpmate, assisted me much by attending the shop; we throve together, & have ever mutually endeavored to make each other happy. Thus I corrected that great erratum as well as I could."

To avoid any legal issues, Read & Franklin decided upon a common-law marriage. On September 1, 1730, the couple held a ceremony for friends & family where they announced they would live as husband & wife. They had 2 children together: Francis Folger "Franky", who died of smallpox at the age 4, & Sarah "Sally." She also raised Franklin's illegitimate son William.

By the late 1750s, Franklin had established himself as a successful printer, publisher & writer. He was appointed the 1st postmaster of Philadelphia & was heavily involved in social & political affairs.  In 1757, Franklin embarked on the 1st of numerous trips to Europe. Read refused to accompany him due to a fear of ocean travel. While Franklin stayed overseas for the next 5 years, Read remained in Philadelphia where she successfully ran her husband's businesses; maintained their home; cared for the couple's children; & regularly attended Quaker Meeting.  Franklin returned to Philadelphia in November 1762. He tried to persuade Read to accompany him back to Europe, but again she refused. Franklin returned to Europe in November 1764, where he would remain for the next 10 years. Read would never see Franklin again.

In 1768, Read suffered a series of strokes that severely impaired her speech & memory. For the remainder of her life, she suffered from poor health & depression. Despite his wife's condition, Franklin did not return to Philadelphia even though he had completed his diplomatic duties. Franklin still did not return, but continued to write to Read. Read's final surviving letter to Franklin is dated October 29, 1773. She stopped corresponding with her husband. Franklin continued to write to Read, inquiring as to why her letters had ceased, but he still did not return home.  On December 14, 1774, Read suffered a final stroke & died on December 19. She was buried at Christ Church Burial Ground in Philadelphia. Franklin was buried next to her upon his death in 1790.  He finally came home.
Posted by Barbara Wells Sarudy at 4:00 AM