Mary Katharine Goddard, the Woman who Promoted the Declaration of Independence 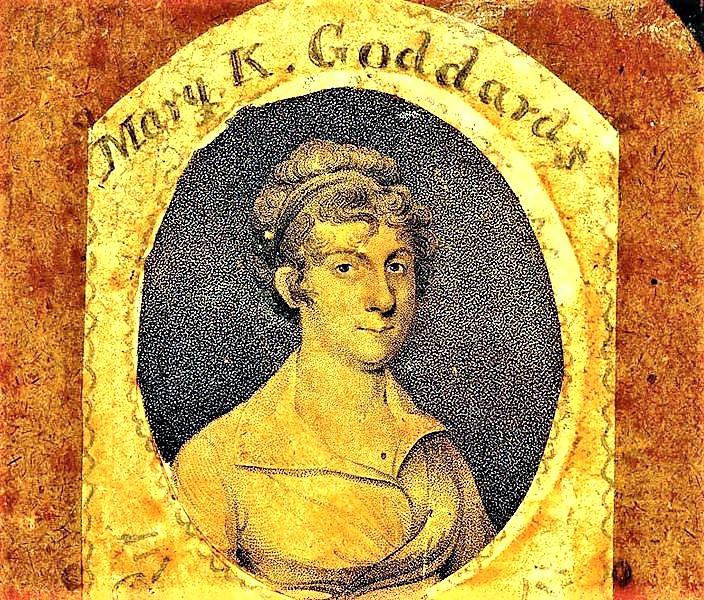 An illustration of Mary Goddard (Brown Library) Mary Katharine Goddard (1738-1816), likely the United States’ first woman employee, this newspaper publisher was a key figure in promoting the ideas that fomented the Revolution

"As British forces chased George Washington’s Continental Army out of New Jersey in December 1776, a fearful Continental Congress packed the Declaration of Independence into a wagon and slipped out of Philadelphia to Baltimore. Weeks later, they learned that the Revolution had turned their way: Washington had crossed the Delaware River on Christmas Day and beaten the redcoats at Trenton and Princeton. Emboldened, the members of Congress ordered a second printing of the Declaration – and, for the first time, printed their names on it.

"For the job, Congress turned to one of the most important journalists of America’s Revolutionary era. Also Baltimore’s postmaster, she was likely the United States government’s first female employee. At the bottom of the broadside, issued in January 1777, she too signed the Declaration: “Baltimore, in Maryland: Printed by Mary Katharine Goddard.”

"For three years after taking over Baltimore’s six-month-old Maryland Journal from her vagabond, indebted brother, Goddard had advocated for the patriot cause. She’d editorialized against British brutality, reprinted Thomas Paine’s Common Sense, and published extra editions about Congress’ call to arms and the Battle of Bunker Hill. In her 23-year publishing career, Goddard earned a place in history as one of the most prominent publishers during the nation’s revolutionary era.

“The ever memorable 19th of April gave a conclusive answer to the questions of American freedom,” Goddard wrote in the Journal after the battles of Lexington and Concord in 1775. “What think ye of Congress now? That day. . . evidenced that Americans would rather die than live slaves!”

"Born June 16, 1738, into a Connecticut family of printers and postmasters, Goddard was taught reading and math by her mother, Sarah, a well-tutored daughter of a wealthy landowner. She also studied Latin, French, and science in New London’s public school, where girls could receive hour-long lessons after the boys’ schooling was done for the day.

"In 1755, the family’s fortunes changed when Goddard’s father, postmaster Giles Goddard, became too ill to work. Sarah sent Goddard’s younger brother, 15-year-old William, to New Haven to work as a printer’s apprentice. Seven years later, after Giles’s death, the Goddards moved to Providence, and Sarah financed Rhode Island’s first newspaper, the Providence Gazette. William, then 21, was listed as publisher. “[It] carried his imprint,” wrote Sharon M. Murphy in the 1983 book Great Women of the Press, “but displayed from the start his mother’s business sense and his sister’s steadiness.”

"Over the next 15 years, William, a restless and impulsive young entrepreneur, moved from Providence to Philadelphia to Baltimore to start newspapers, always putting his mother or sister in charge of his previous businesses as he went. In 1768, William sold the Providence paper and convinced Sarah and Mary Katharine to move to Philadelphia to help run his Pennsylvania Chronicle. In 1770, Sarah died, and William, who was feuding with his financial partners, left the Chronicle in his sister’s hands.

“She was dependable and he brilliantly erratic,” Ward L. Miner wrote in his 1962 biography, William Goddard, Newspaperman. Mary Katharine kept her brother’s businesses running while he did time in debtor’s prison in 1771 and 1775. In February 1774, William handed control of his fledgling Maryland Journal over to her. That allowed him to concentrate on building his most enduring business: a private postal service, free of British control, which later became the U.S. Post Office.

"Mary Katharine Goddard took over the Maryland Journal just as the colonists’ anger at British rule surged toward revolution. By June 1774, she was publishing reports on Britain’s blockade of Boston Harbor. In early April 1775, she endorsed the women-led homespun movement against British textiles, encouraging women to raise flax and wool and embrace frugality. She published Common Sense in two installments in the paper, and covered the Revolution’s first battles with fervor. “The British behaved with savage barbarity,” she wrote in her edition of June 7, 1775.

"That July, the Continental Congress adopted William Goddard’s postal system, then promptly appointed the more reliable Benjamin Franklin as postmaster general. Mary Katharine was named Baltimore’s postmaster that October, which likely made her the United States’ only female employee when the nation was born in July 1776. When Congress turned to her to print copies of the Declaration the following year, she recognized her role in a historical moment. Though she usually signed her newspaper “M.K. Goddard,” she printed her full name on the document.

"The war years were tough on Goddard’s businesses. Because of its meager treasury, Congress often failed to pay her, so she paid post riders herself. She published the Maryland Journal irregularly in 1776, probably because of paper shortages. In 1778, she announced her willingness to barter with subscribers, accepting payment in beeswax, flour, lard, butter, beef or pork. Yet she was able to boast, in a November 1779 issue, that the Journal had as extensive a circulation as any newspaper in the United States.

"Goddard “supported her Business with Spirit and Address, amidst a Complication of Difficulties,” wrote her brother and his new partner, Eleazer Oswald, in a 1779 advertisement. In the same broadsheet, they declared that their new paper mill would not interfere “in the smallest Degree” with Goddard’s business.

"But in January 1784, William Goddard apparently forced his sister out of the business and took her position as publisher of the Maryland Journal for himself. Later that year, the siblings published competing almanacs. William included a screed that attacked his sister as “a hypocritical character” and insulted her “double-faced Almanack,” “containing a mean, vulgar and common-place Selection of Articles.”

"There’s no evidence that Goddard and her brother ever spoke again. When William got married in Rhode Island in 1786, Mary Katharine did not attend. A mutual friend, John Carter, wrote her a letter describing the wedding and suggesting, probably in vain, that the siblings reconcile. “Dear Miss Katy,” begins the letter -- a rare window into her personal relationships.

"In October 1789, she lost her job as postmaster of Baltimore. The newly appointed postmaster general, Samuel Osgood, replaced her with John White of Annapolis. John Burrell, Osgood’s assistant, justified the move on sexist grounds. Since supervision of nearby post offices was being added to the job description, Burrell said, “more travelling might be necessary than a woman could undertake.”

"Two hundred prominent Baltimore residents signed a letter demanding Goddard’s reinstatement. Goddard herself appealed to President George Washington and the U.S. Senate for her job back. Her petition echoes the disappointment she must’ve also felt when her brother pushed her out of the Journal.

“She hath been discharged without the smallest imputation of any Fault,” Goddard wrote, in the third person, to the Senate in January 1790, when she was 51. “These are but poor rewards indeed for fourteen Years faithful Service, performed in the worst of times,” she argued. Her “little Office,” Goddard added, was “established by her own Industry in the best years of her life, & whereon depended all her future Prospects of subsistence.”

"Washington refused to intervene, and the Senate never answered Goddard’s letter. She spent the next 20 years running a bookstore in Baltimore and selling dry goods. Never married, she died in Baltimore on August 12, 1816, at age 78, leaving her property to her servant, Belinda Starling, “to recompense the faithful performance of duties to me.”

"Goddard, as a contemporary of hers declared, was “a woman of extraordinary judgment, energy, nerve, and strong good sense.” Though sex discrimination and her ne’er-do-well brother ended her career too soon, Goddard left a mark as one of the Revolutionary era’s most accomplished publishers and a female pioneer in the U.S. government. None of Goddard’s letters survive, and she revealed little about herself in her journalism. Instead, our best evidence of her personality is her work, steady yet animated by a passion for American liberty."
Posted by Barbara Wells Sarudy at 4:00 AM