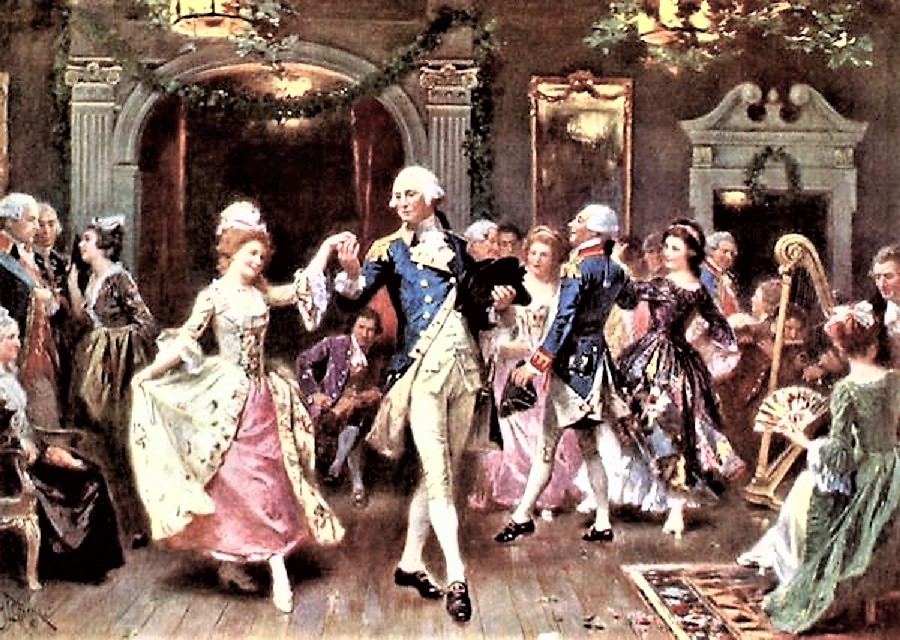 Jean Leon Gerome Ferris, The Victory Ball, 1781, ca. 1929. This 20th-century depiction of Washington takes place after the Battle of Yorktown.

“The anniversary of our alliance with France was celebrated in proper style a few days since near head-quarters, at Pluckemin…In the evening a very beautiful set of fire-works was exhibited, and the celebration was concluded by a splendid ball, opened by his Excellency General Washington, having for his partner the lady of General Knox” - Dr. James Thacher, Pluckemin, New Jersey, February 4, 1779

“His Excellency General Washington was unusually cheerful. He attended the ball in the evening, and with a dignified and graceful air, having Mrs. Knox for his partner, carried down a dance of twenty couples in the arbor on the green grass." – General Nathanael Greene to Joseph Reed, Morristown, New Jersey, Tuesday February 29, 1780.

“The General danced every set, that all the ladies might have the pleasure of dancing with him, or as it has since been handsomely expressed, get a touch of him.”– James Tilton to Gunning Bedford Jr., Annapolis, Maryland, December 25, 1783.

“He (George Washington) attended the ball of the 22nd of February; opened it by dancing a minuet with some lady, and then danced cotillions and country dances; was very gallant, and always attached himself, by his attentions, to some one or more of the most beautiful and attractive ladies at the balls.” – Judge Francis T. Brooke (1784).

Dancing was an amusement that George Washington & his wife enjoyed greatly was dancing. In his youth he attended balls & "routs" whenever possible & when fighting French & Indians on the frontier he felt as one of his main deprivations his inability to attend the "Assemblies." After his marriage he & his wife went often to balls in Alexandria, attired no doubt in all the bravery of imported English clothes. He describes a ball of 1760 in these terms:
"Went to a ball at Alexandria, where Musick & dancing was the chief entertainment, however, in a convenient room detached for the purpose abounded great plenty of bread & butter, some biscuits, with tea & coffee, which the drinkers of could not distinguish from hot water sweet'ned--Be it remembered that pocket handkerchiefs served the purposes of Table cloths & Napkins & that no apologies were made for either. I shall therefore distinguish this ball by the stile & title of the Bread & Butter Ball."

A certain Mr. Christian conducted a dancing school which met at the homes of the patrons, & the Custis children, John Parke & Martha, were members, as were Elizabeth French of Rose Hill, Milly Posey & others of the neighborhood young people. In 1770 the class met four times at Mount Vernon & we can not doubt that occasionally the host danced with some of the young misses & enjoyed it.

An established institution was the election ball, which took place on the night following the choice of the delegate to the Burgesses. Washington often contributed to the expenses of these balls, particularly when he was himself elected...

There is much conflicting evidence regarding Washington's later dancing exploits. Some writers say that he never tripped the light fantastic after the Revolution & that one of his last participations was at the Fredericksburg ball after the capture of Cornwallis when he "went down some dozen couple in the contra dance." It is certain, however, that long afterward he would at least walk through one or two dances, even though he did not actually take the steps. One good lady who knew him well asserts that he often danced with Nelly Custis, & he seems to have danced in 1796 when he was sixty-four.

But to the invitation to the Alexandria assembly early in 1799 he replied:
"Mrs. Washington & myself have been honored with your polite invitation to the assemblies of Alexandria this winter, & thank you for this mark of your attention. But, alas! our dancing days are no more. We wish, however, all those who have a relish for so agreeable & innocent an amusement all the pleasure the season will afford them."  From George Washington: Farmer by Paul Leland Haworth (1876-1936) Ch 14 A Farmer's Amusements

In 1760, newlywed George Washington wrote, "Went to a ball at Alexandria, where Musick and dancing was the chief Entertainment, however in a convenient room detached for the purpose abounded great plenty of bread and butter, some biscuits, with tea and coffee, which the drinkers of could not distinguish from hot water sweet'ned...pocket handkerchiefs served the purposes of Table cloths & Napkins and that no apologies were made for either." He dubbed the event the "the Bread & Butter Ball," hoping it would be celebrated annually in Alexandria. 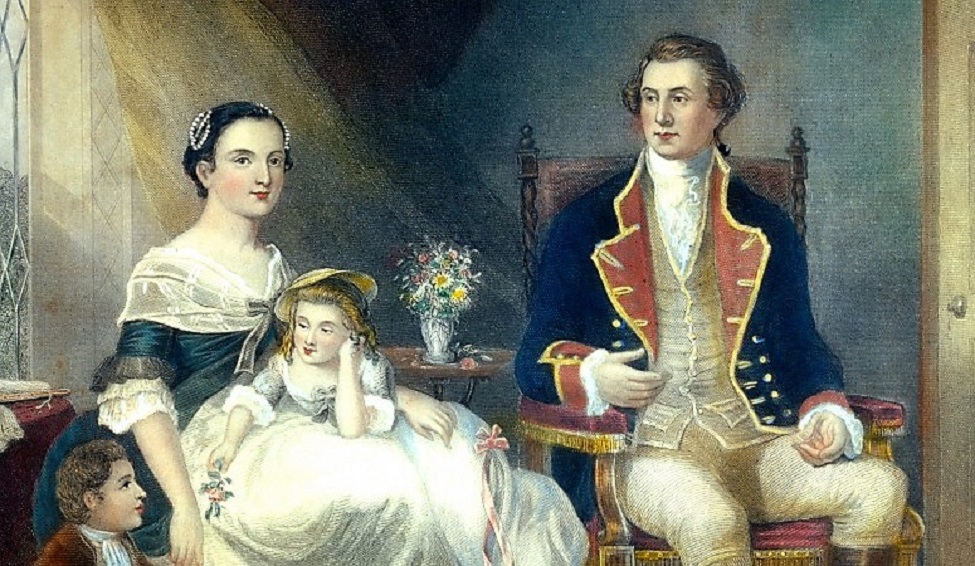 Colonel and Mrs. George Washington and the children – Jacky and Patsy Custis.

After the victory over the British at Yorktown, Washington danced for a celebrating audience in his old hometown of Fredericksburg, Virginia. His relative remembered that the "minuet was much in vogue at that period, and was peculiarly calculated for the display of the splendid figure of the chief, and his natural grace and elegance of air and manners" 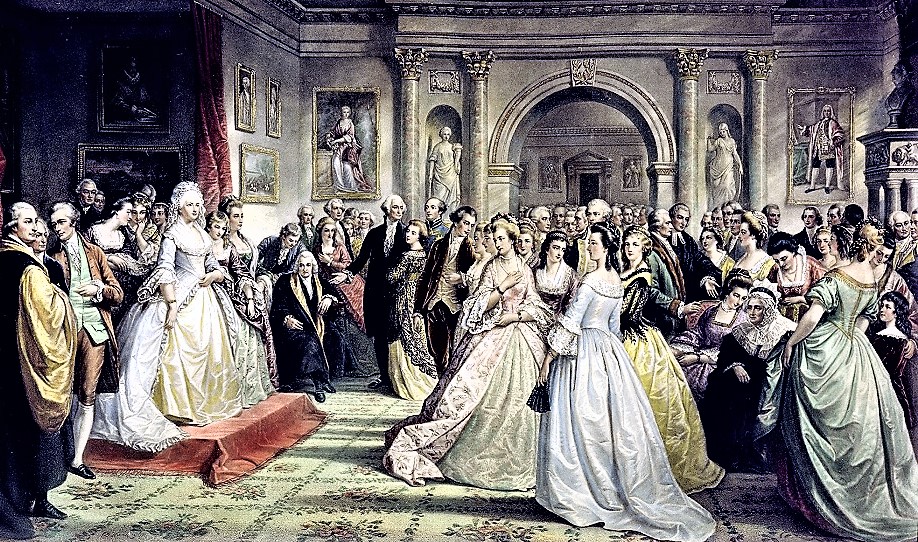 But At Mount Vernon that year, George Washington declared to the Alexandria General Assemblies Managers, on November 12, 1799. that dancing is“so agreeable and innocent an amusement.”