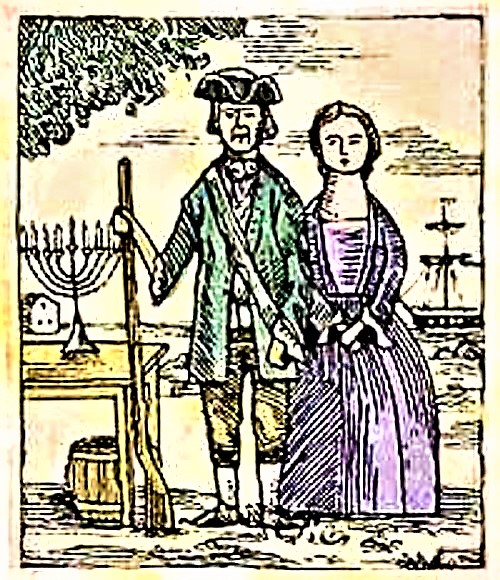 Far from being newcomers, Jews are found in smaller or greater numbers in all of the original colonies in the early days of colonial settlement. In some, like New York & Rhode Island, they appear in considerable numbers long before the close of the 17C. In Georgia, they were among the earliest settlers.

In the 18C, the Jewish communities continued to grow in the North American British American colonies.  Sephardic Dutch Jews were among the early settlers of Newport (where Touro Synagogue, the country's oldest surviving synagogue building, stands), Savannah, Philadelphia & Baltimore.

In New York City, Shearith Israel Congregation is the oldest continuous congregation started in 1687 having their 1st synagogue erected in 1728, & its current building still houses some of the original pieces of that first.

In 1740 the British Parliament passed the Plantation Act to regularize & encourage immigration; the law specifically permitted Jews & other nonconformists to be naturalized in their American colonies. By the time of American Revolution, the Jewish population in America was still small, with only 1,000 to 2,000, in a colonial population of about 2.5 million.

Richmond, Virginia, was founded in 1737. Dr. John de Sequeyra arrived in Virginia in 1754, from London. Dr. Sequeyra traveled between Mount Vernon, Williamsburg & Richmond in the course of his duties. He was trained as a Physician in Holland.  George Washington was a Colonel at the time when he requested the services of Dr. John de Sequeyra to aid his step-daughter Martha Park Custis ("Patsy" Custis). Throughout 1769, Colonel Washington & his wife, Martha Parke Custis, received the assistance of Dr Sequeyra. In 1754, George Washington mounted an expedition across the Allegheny Mountains accompanied by Michael Franks, of Capt Braam's Company, & Jacob Myer of Capt Mercer's Company.

Several Jewish names appear in Virginia about the period of the French and Indian War. In 1754 George Washington was sent forward to occupy the outposts on the Ohio. A list of the various companies of the Virginia Regiment under Colonel Washington are Michael Franks of Captain Van Braam’a Company and Jacob Myer of Captain Mercer’s Company. Both soldiers are repeatedly mentioned at this period.

Among the settlers in Albemarle County is Michael Israel, a Jew, who obtained a patent for eighty acres of land in 1757.  He was a Border-Ranger and a member of the militia of his county in 1758. Solomon Israel, probably a brother, is mentioned by the historian of Albemarle as a Jewish landowner in 1764.

In 1758 Michael Israel appears in Hening’s Statutes as one of the Border-Defenders who received compensation from the Colony of Virginia.a He is mentioned repeatedly as late as 1779, when he and his wife Sarah disposed of 300 acres of land at Mechum’s River. During the 19C, the Mountain Pass of Albemarle was still known as “Israel’s Gap,” though the family has entirely disappeared.

During the French and Indian War, for, in the letters to Washington appears one from David Franks of Philadelphia, in June, 1758. After Braddock’s defeat the duty of reorganizing the provincial troops fell to Washington, and he retained command to the close of the campaign of 1758. It appears that Franks furnished the military supplies for this Virginia expedition. His kinsman, Moses Franks, had supplied the King’s troops during the French and Indian War in transactions involving vast sums of money.

By 1776 & the War of Independence, around 2,000 Jews lived in America, most of them Sephardic Jews who immigrated from Spain & Portugal. They played a role in the struggle for independence, including fighting the British, with Francis Salvador being the first Jew to die.

The highest ranking Jewish officer of the Colonial forces was Colonel Mordecai Sheftall. Others, like David Salisbury Franks, despite loyal service in both the Continental Army and the American diplomatic corps, suffered from his association as aide-de-camp for the traitorous general Benedict Arnold.

In the “Journal of the Committee of Safety of Virginia,” dated Williamsburg, March 26, 1776, appears an order for a warrant to Michael Gratz, of Philadelphia, for £2800 for goods purchased of him.   In June, 1776, the Committee of Safety for Virginia issued an order for Michael Gratz for £708 and 78 dollars for “ Sundry Broadcloaths” furnished the public. Michael Gratz was one of the patriotic merchants who signed the Nonimportation Agreement of 1765. During the Revolutionary War Michael Gratz moved to Virginia and took the oath of allegiance to that State. When he returned to Philadelphia in 1783. he is described in Westcott’s list as “late of Virginia."

Aside from Haymn Salomon’s great services as the co-worker of Robert Morris, and in advancing large sums to the Revolutionary cause, he also has the credit of supplying pecuniary aid to Arthur Lee, Theodore Bland, Mercer and Randolph. James Madison declared that when the pecuniary resources of the members of Congress both public and private were cut off, recourse was had to Mr. Salomon for means to answer their current expenses and "he was always found extending his friendly hand."  Madison also states that he never resorts to Salomon’s generosity without great mortification, “as he obstinately rejects all recompense.“

President George Washington's reply letter to Moses Seixas and the Hebrew Congregation of Newport Rhode Island in 1790 is listed by the Library of Congress as of the most important documents in the history of our Republic:
"Happily, the Government of the United States, which gives to bigotry no sanction, to persecution no assistance, requires only that they who live under its protection should demean themselves as good citizens in giving it on all occasions their effectual support...May the children of the stock of Abraham who dwell in this land continue to merit and enjoy the good will of the other inhabitants—while every one shall sit in safety under his own vine and fig tree and there shall be none to make him afraid. May the father of all mercies scatter light, and not darkness, upon our paths"

In 1790, the approximate 2,500 Jews in America faced a number of legal restrictions in various states that prevented non-Christians from holding public office & voting, but Delaware, Pennsylvania, South Carolina, & Georgia soon eliminated these barriers, as did the Bill of Rights Of The United States of America in 1791 generally. Sephardic Jews became active in community affairs in the 1790s, after achieving "political equality in the five states in which they were most numerous." Other barriers did not officially fall for decades in the states of Rhode Island (1842), North Carolina (1868), & New Hampshire (1877).
Posted by Barbara Wells Sarudy at 4:00 AM