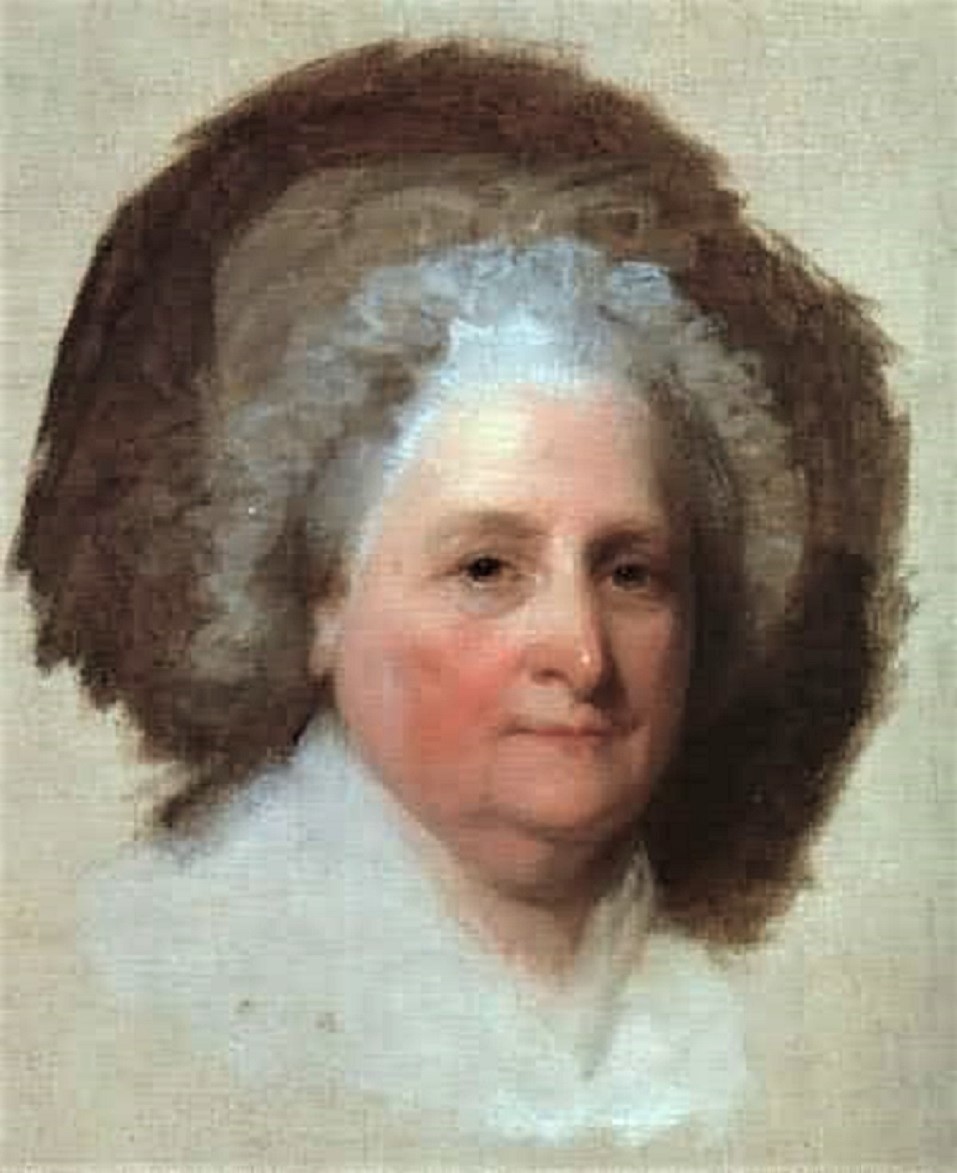 Martha Dandridge's first husband was a man much older than herself & her second was almost a year younger. Before she embarked upon her second matrimonial venture she had been the mother of four children, & having lost two of these, her husband, her father & mother, she had known, though only twenty-seven, most of the vital experiences that life can give...she was well trained in social & domestic accomplishments, could dance & play on the spinet--in short, was brought up a "gentlewoman." That she must in youth have possessed charm of person & manners is indicated by her subjugation of Daniel Parke Custis, a man of the world & of much greater fortune than herself, & by her later conquest of Washington...

Edmund Pendleton relates that when on his way to the Continental Congress in 1774 he stopped at Mount Vernon, "She talked like a Spartan mother to her son on going to battle. 'I hope you will all stand firm--I know George will,' she said..."  ...at Valley Forge she worked day & night knitting socks, patching garments & making shirts for the loyal band of winter patriots who stood by their leader & their cause in the darkest hour of the Revolution.

A Norristown lady who paid her a call in the little stone house that still stands beside the Schuylkill relates that "as she was said to be so grand a lady, we thought we must put on our best bibs & bands. So we dressed ourselves in our most elegant ruffles & silks, & were introduced to her ladyship. And don't you think we found her knitting with a specked apron on! She received us very graciously, & easily, but after the compliments were over, she resumed her knitting..."

Mrs. Washington not only managed the Mount Vernon household, but she looked after the spinning of yarn, the weaving of cloth & the making of clothing for the family & for the great horde of slaves. At times, particularly during the Revolution & the non-importation days that preceded it, she had as many as sixteen spinning-wheels in operation at once. The work was done in a special spinning house, which was well equipped with looms, wheels, reels, flaxbrakes & other machinery. Most of the raw material, such as wool & flax & sometimes even cotton, was produced upon the place & never left it until made up into the finished product...

The housewife believed in good cheer & an abundance of it, & the larders at Mount Vernon were kept well filled. Once the General protested to Lund Washington because so many hogs had been killed, whereupon the manager replied that when he put up the meat he had expected that Mrs. Washington would have been at home & that he knew there would be need for it because her "charitable disposition is in the same proportion as her meat house..."

Mrs. Carrington, who, with her husband, one of the General's old officers, visited Mount Vernon about this time wrote: "Let us repair to the Old Lady's room, which is precisely in the style of our good old Aunt's--that is to say, nicely fixed for all sorts of work--On one side sits the chambermaid, with her knitting--on the other, a little colored pet learning to sew, an old decent woman, with her table & shears, cutting out the negroes' winter clothes, while the good old lady directs them all, incessantly knitting herself & pointing out to me several pair of nice colored stockings & gloves she had just finished, & presenting me with a pair half done, which she begs I will finish & wear for her. Her netting too is a great source of amusement & is so neatly done that all the family are proud of trimming their dresses with it..."

Like her husband, Mrs. Washington was an early riser, & it was a habit she seems to have kept up until the end. She rose with the sun & after breakfast invariably retired to her room for an hour of prayer & reading the Scriptures. Her devotions over she proceeded with the ordinary duties of the day.

She seems to have been somewhat fond of ceremony & to have had a considerable sense of personal dignity. A daughter of Augustine Washington, who when twelve years of age spent several weeks at Mount Vernon, related when an old woman that every morning precisely at eleven o'clock the mistress of the mansion expected her company to assemble in the drawing-room, where she greeted them with much formality & kept them an hour on their good behavior. When the clock struck twelve she would rise & ascend to her chamber, returning thence precisely at one, followed by a black servant carrying an immense bowl of punch, from which the guests were expected to partake before dinner. Some of the younger girls became curious to discover why her "Ladyship" retired so invariably to her room, so they slipped out from where she was entertaining their mothers, crept upstairs & hid under her bed. Presently Lady Washington entered & took a seat before a large table. A man-servant then brought a large empty bowl, also lemons, sugar, spices & rum, with which she proceeded to prepare the punch. The young people under the bed thereupon fell to giggling until finally she became aware of their presence. Much offended, or at least pretending to be, she ordered them from the room. They retired with such precipitancy that one of them fell upon the stairway & broke her arm...

She was beloved by her servants & when she left Mount Vernon for New York in 1789 young Robert Lewis reported that "numbers of these poor wretches seemed most affected, my aunt equally so."