Henrietta Benigna Justine Zinzendorf von Watteville (1725-1789) Moravian educator, a key figure in the beginnings of Moravian Seminary & College for Women, Bethlehem, Pa., was born in Berthelsdorf, Saxony. She was the 1st daughter & 2nd of 12 children, of whom only 4 reached maturity, of Count Nicolaus Ludwig von Zinzendorf by his wife, Countess Erdmuthe Dorothea von Reuss. Her father, founder of the Renewed Moravian Church, was of an old family of the Austrian nobility that had migrated to Germany. Her mother was of the nobility of Thuringia. Reared in the 18th-century Moravian Church, Benigna lived & achieved as a devout Pietist. 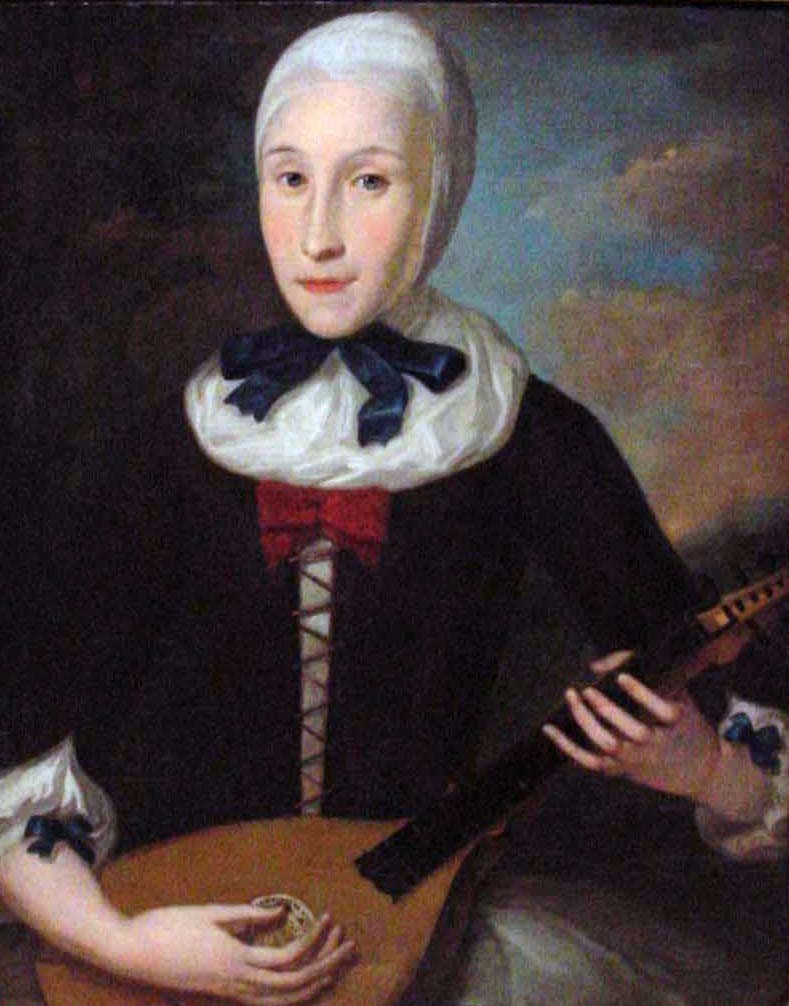 Her father’s banishment from Saxony, when she was 11, marked the beginning for her of a much-traveled life. With him she came to America for the first time in December 1741, for a stay of 14 months, chiefly in the newly established Moravian communities of Pennsylvania.

On May 4, 1742, at her father’s suggestion, the 16-year-old countess, with 2 assistants, opened a girls’ school in the Ashmead house in Germantown, Pennsylvania. Here 25 pupils were instructed in reading, writing, religion, & the household arts in what was probably the first boarding school for girls in the 13 British American colonies. Seven weeks later the school moved to Bethlehem; & in 1745, to nearby Nazareth, returning permanently in 1749, to Bethlehem, the center of the Moravian Church in America. 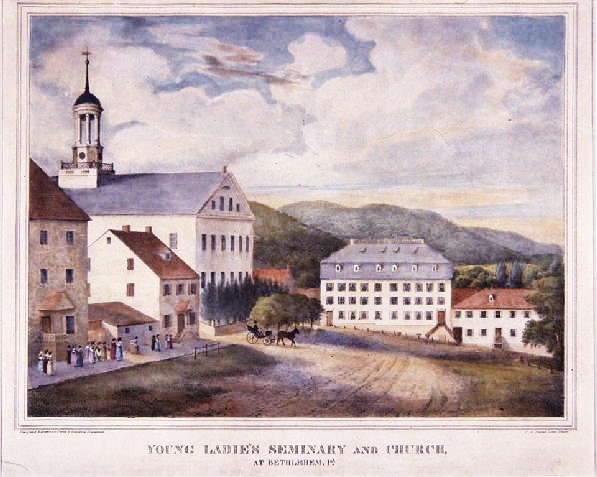 On July 27, 1742, Count von Zinzendorf and his fellowship crossed the Blue Mountain into Cherry Valley, and on July 28 they finally emerged from the endless forests at Meniolágoméka -- "The Fat Land Among the Barren" -- present-day Kunkletown. Von Zinzendorf's 16-year-old daughter, Benigna, upon meeting the Indian children at the settlement, decided that the girls should have the opportunity to go to school just like white boys.

The same year she founded Moravian Seminary in Germantown, Pennsylvania. Shortly thereafter it was moved to Bell House in Bethlehem, and Lady Benigna invited all the Indian girls to come. Moravian Seminary was the first boarding school for girls in the New World, and over time it gained a superb reputation -- so much so that 50 years later, while he was President, George Washington personally petitioned for admission of his great-nieces. Eventually the school's charter was expanded, and it became Moravian College and Moravian Academy, both of which remain to this day. 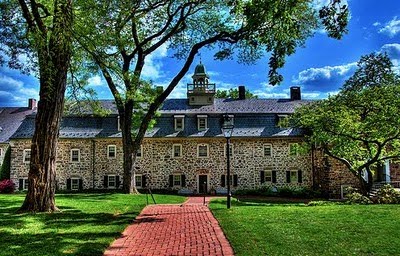 In the summer of 1742, Benigna Zinzendorf interrupted her teaching to accompany her father on 2 of his 3 trips among the Indians of Pennsylvania & New York, preparatory to establishing missions among them. The Zinzendorfs returned to Europe the following winter.

In 1746 Benigna was married to Baron Johann von Waterville (de Watteville), a Moravian clergyman & her father’s secretary, in a ceremony performed by Zinzendorf at the new Moravian settlement in Zeist, Holland. Consecrated a bishop the following year, Watteville, aided by his capable wife, became out outstanding leader of his church.

The couple came to America on church business in September 1748 & remained a year. On this visit Benigna de Watteville had a hand in the return of the girls’ school to Bethlehem, its consideration with schools in the outlying Moravian congregations, & the enlargement of its curriculum.

Thirty-five years later, en route to America a 3rd time, she was shipwrecked with her husband on the rocks off the Leeward Islands in February 1784. Reaching Bethlehem in June, they remained for 3 years. Again Countess Benigna was on hand to help direct a reorganization of the girls’ seminary, which in 1785, now opened to pupils from outside the Moravian Church, became a largely new institution, known for many years as the Bethlehem Female Seminary.

The Moravian philosophy of education was the rearing of children in a controlled Christian environment under consecrated teachers. Because of the worldwide mission commitments of the Church, many parents were abroad, with their children left behind in the care of the home community. Moravian teachers, therefore, tried as nearly as possible to serve as substitute parents. Both as a parent & as a devout church member, Benigna de Watteville kept this ideal in mind.

She had four children of her own: Johann Ludwig (born 1752), Anna Dorothea Elizabeth (1754), Maria Justine (1762), & Johann Christian Frederick (1766). The older son died while a missionary in Tranquebar, India, in 1780, & the younger son died at nineteen as a student at Herrnhut, the church headquarters on his grandfather’s Berthelsdorf estate. The younger daughter, who never married, served as a worker in the church. The older daughter married Hans Christian Alexander von Schweinitz (later changed to de Schweinitz) in Bethlehem, Pa., in 1779. One of their children was the distinguished American botanist Louis David de Schweinitz, & de Schweinitz descendants have for four generations been prominent in American educational & professional life.

Benigna de Watteville died in the place of her birth at the age of sixty-three, a year after her husband. The Bethlehem seminary, incorporated in 1863 as the Moravian Seminary for Young Ladies, became in 1913, Moravian Seminary & College for Women & in 1953, a part of the coeducational Moravian College at Bethlehem.

Vogt, Peter. "A Voice for Themselves: Women as Participants in Congregational Discourse in the 18th-Century Moravian Movement." In Women Preachers and Prophets through Two Millennia of Christianity, edited by Beverly Mayne Kienzle and Pamela J. Walker, 227-247. Berkeley: University of California Press, 1998.