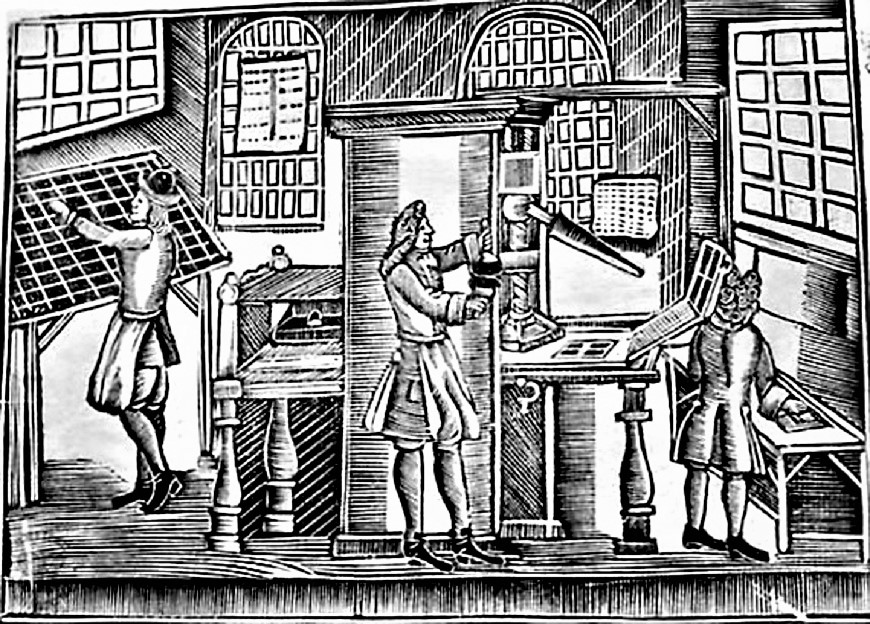 Sarah Updike Goddard (c. 1701-Jan. 5, 1770), printer, was born at Cocumscussuc, one mile north of the village of Wickford, R.I., to Lodowick & Abigail (Newton) Updike. Her grandfather, Gysbert op Dyck, had emigrated from Wesel, Germany, to Lloyd’s Neck, Long Island, in 1635. In 1643 he was married to Katherine Smith, daughter of an early Rhode Island settler, Richard Smith. Their son, Lodowick (1646-1737), moved in 1664 from New Amsterdam to Kingston, R.I., where he anglicized his surname to Updike, became a substantial landowner, & held several public offices. He had one son & five daughters, Sarah among them; the son, Daniel, served for several years as attorney general of the colony of Rhode Island.

Sarah’s education included not only the subjects usual to the day but also French & Latin from a French tutor in the Updike household. On Dec. 11, 1735, she was married to Dr. Giles Goddard of Groton, Conn., like herself a member of the Church of England, & he practiced medicine & was for many years postmaster. Of their four children, only two, Mary Katherine & William, lived to adulthood. Presumably Mrs. Goddard taught the two children herself, though William later mentioned having in a school as a child. On Jan. 31, 1757, Giles Goddard died, leaving an estate valued at 780 pounds. When William Goddard in 1762 started Providence’s first printing shop & newspaper, the Providence Gazette, the money (300 pounds) too set up the business came from his mother, who in the same year moved from New London to Providence. Both Mrs. Goddard & her daughter doubtless worked in the shop, since both became accomplished printers.

Lacking enough subscribers, William Goddard temporarily ceased publication of the Providence Gazette on May 11, 1765, & moved to New York, but the Providence printing office continued to function under the supervision of his mother. During the rest of 1765 the shop issued the annual West’s Almanack & various pamphlets under the imprint “S. & W. Goddard.” When, on Aug. 9, 1766, the Providence Gazette was revived, it was under the auspices of “Sarah Goddard & Company,” Sarah thereby becoming Providence’s second printer. She continued to print the weekly newspaper & run a bookstore & bookbindery until Nov. 5, 1768, when the business was sold to a partner, John Carter, for $550. Her bluestocking inclinations are revealed by her printing in 1766 the first American edition of the Letters of the Right Honourable Lady Mary Wortley Montagu.

After the sale of her Providence business Sarah Goddard joined her son in Philadelphia, where he was printing the Pennsylvania Chronicle; her financial assistance aided him in his struggle with his silent partners, Joseph Galloway & Thomas Wharton. In Philadelphia, Sarah Goddard remained mostly in the background, though she occasionally supervised the shop during William’s frequent trips to New England in 1769.

She died in Philadelphia & was buried in the Christ Church burial ground. An obituary in New-York Gazette of Jan. 22, 1770, eulogized “her uncommon attainments in literature,” “sincere piety,” “unaffected humility,” “easy agreeable chearfulness & affability,” & “sensible & edifying conversation.” In spite of her restless & selfish son, her daughter, Mary Katherine Goddard, carried on the family tradition.