In 1774 John Adams recorded in his diary on several special occasions enjoying the turtle on the dinner table, while visiting Philadelphia for the First Continental Congress. 1774 Septr. 11. "Dined at Mr. Willings, who is a Judge of the Supream Court here, with the Gentlemen from Virginia, Maryland and New York. A most splendid Feast again—Turtle and every Thing else." 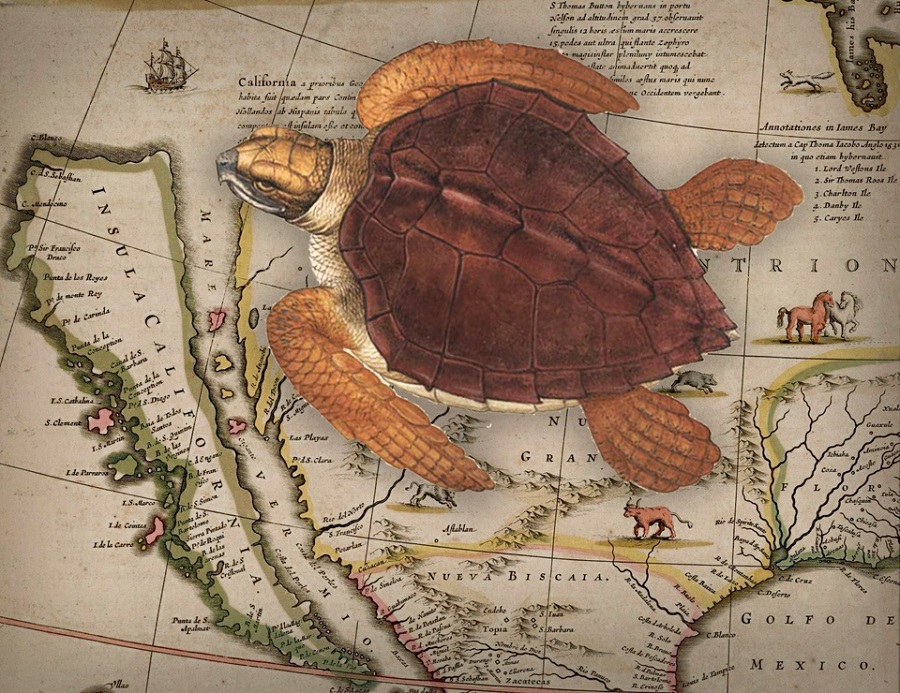 Sea Turtles were available in both the Atlantic & Pacific

In 1768, John Hancock was buying sea turtles to serve at his table. 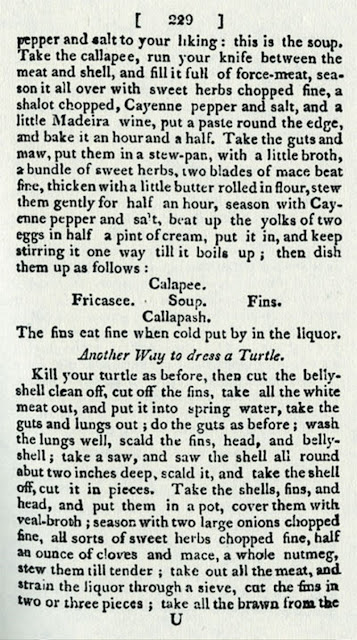 Recipes for preparing sea turtle.  1774 edition of Hannah Glasse’s The Art of Cookery, Made Plain and Easy. The recipe 1st appeared in the 1751 edition of this book.

Colonial & Early American cookbooks do not contain suggested complete menus or "bills of fare" for New Year's celebrations. What we know about these gatherings is gleaned from primary sources such as journals, letters, household accounts, & newspaper articles. 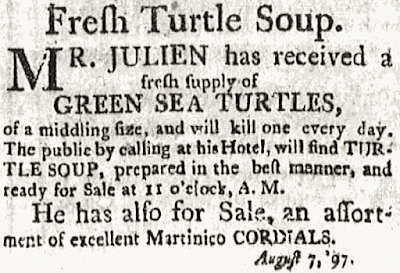 "The custom of paying New Year's calls originated in New York, where the Dutch held open house on New Year's Day & served cherry bounce, olykoeks [doughnuts] steeped in rum, cookies, & honey cakes. From New York the custom spread throughout the country. On the first New Year's after his inauguration, George Washington opened his house to the public, & he continued to receive visitors on New Year's Day throughout the seven years he lived in Phildadelphia. On January 1, 1791, a senator from Pennsylvania hoted in his diary: "Made the President the compliments of the season; had a hearty shake of the hand. I was asked to partake of punch & cakes, but declined...Eventually, it became de rigeur [common social practice] for those who intended to receive company to list in newspapers the hours they would be "at home." It was a disastrous practice: parties of young men took to dashing from house to house for a glass of punch, dropping in at as many of the homes listed in the papers as they could. Strangers wandered in off the streets, newspapers under their arms, for a free drink & a bit of a meal. The custom of having an open house on the first day of the year survived the assaults of the newspaper readers. The traditional cookies & cakes continued to be served, along with hot toddies, punches, eggnogs, tea, coffee, & chocolate. But public announcements of at-home hours were dropped at the end of the nineteenth century, & houses were open only to invited friends."
---American Heritage Cookbook & Illustrated History of American Eating & Drinking, American Heritage:New York] 1964 (p. 392)

[New York]
"New Year's Eve was especially noisy, with the firing of guns to bring in the New Year. Ordinances in both the Netherlands & New Netherland eventually prohibited such behavior. The special treat for New Year's Day in the Netherlands was nieuwjaarskoeken (thick crisp waters), which originated in the eastern part of the country & adjoining parts of Germany. These wafers were made in a special wafer iron. The oblong or round long-handleed irons, made by blacksmiths, created imprints of a religious or secular nature on the wafers. Wafer irons were often given as a wedding gift, even in this country. Enormous quantities of wafers were prepared on New Year's Day. The were consumed by family, servants, & guests distributed to children, who went from house to house singing New Year songs, while collecting their share of treats along the way. There is ample evidence in diaries & letters that Dutch Americans continued the custom of visiting each other on New Year's Day. In New Netherland...the nieuwjaarskoeken were molded in wooden cake-boards, instead of wafer irons...The American New Year's cake is a combination of two Dutch pastries brought here by the early settlers, the nieuwjaarskoeken described above & spiced, chewy, honey cakes formed in a wooden mold or cake-board. It was in the late eighteenth century that this homemade pastry prepared in heirloom wafer irons by the Dutch, changed to a mostly store-bought product purchased by the population at large."
---Matters of Taste: Food & Drink in Seventeenth-Century Dutch Art & Life, Donna R. Barnes & Peter G. Rose [Syracuse University Press:Syracuse NY] 2002 (p. 24-5)

Posted by Barbara Wells Sarudy at 4:01 AM