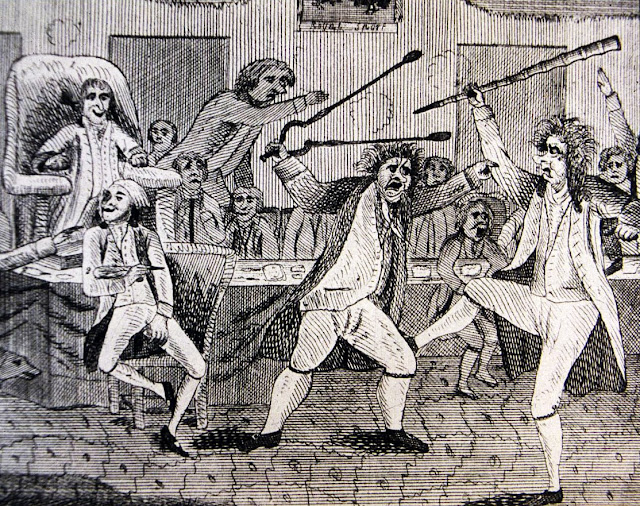 This cartoon of "Congressional Pugilists" depicts a heated partisan debate in the interior of Congress Hall in 1798. A fight on the floor of Congress between Vermont Representative Matthew Lyon (1749-1822), a Jeffersonian Republican, and Roger Griswold (1762-1812) of Connecticut, a Federalist.

Griswold had accused Lyon of cowardice during the American Revolution and Lyon responded by spitting tobacco juice in Griswold's face.  Griswold, armed with a cane, kicks Lyon, who grasps his arm and raises a pair of fireplace tongs to strike him.

Below are the verses printed under the cartoon:
"He in a trice struck Lyon thrice
Upon his head, enrag'd sir,
Who seiz'd the tongs to ease his wrongs,
And Griswold thus engag'd, sir."
Posted by Barbara Wells Sarudy at 4:00 AM