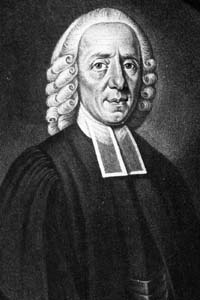 The Rev. Mr. Johann Martin Bolzius (1703- 1765) was a pastor who accompanied the Salzburgers from Rotterdam in their pilgrimage to England, and then on to Georgia in 1733. He wrote back to Rotterdam trying to explain the Atlantic coast colonies in the form of questions & answers. His 1750 letter remains at the Georgia Salzburger Society.

Question. What is the daily work of the Negroes on a plantation throughout the year?

Answer. If one wants to establish a plantation on previously uncultivated land, one orders the Negroes to clear a piece of land of trees and bushes first of all, so as to build the necessary huts on it at once.

2) Until March one has as much land cleared of trees and bushes and prepared for planting as possible.

3) The land which is to be cultivated must be fenced with split poles 12 to 13 feet long and nearly 4 inches thick. Every Negro must split 100 of such poles per day from oaks or firs. Others carry them together, and several make the fence. In this men and women are kept busy.

4) In the evening all the Negroes must occupy themselves with burning the cut bushes and the branches.

N.B. When the land is prepared for planting, the bushes must be cut down first and piled on heaps, and afterwards the trees must be felled. The Negroes must hack the branches off the trees, and also pile them in heaps.

Now when one observes that all branches and bushes are quite dry, one puts fire to them and lets them burn up. Since the land is full of dry leaves, the fire spreads far and wide and burns grass and everything it finds. One lets the felled trees lie on the field until they rot, for it would be a loss of time if one wanted to split and burn them.

The order of planting is the following,

1) The Negroes plant potatoes at the end of March unless the weather is too cold. This keeps all Negroes busy, and they have to loosen the earth as much as they can. The potatoes are cut into several pieces and put into long dug furrows, or mounds, which are better than the former. When the leaves have grown 2 or 3 feet long (which is usually the case at the end of May or early June), one piles these leaves on long hills so that both ends project and are not covered.

2) As soon as one is through with the potatoes, one plants Indian corn. A good Negro man or woman must plant half an acre a day. Holes are merely made in the earth 6 feet from one another, and 5 or 6 kernels put into each hole.

3) After the corn the Negroes make furrows for rice planting. A Negro man or woman must account for a quarter acre daily. On the following day the Negroes sow and cover the rice in the furrows, and half an acre is the daily task of a Negro.

4) Now the Negroes start to clean the corn of the grass, and a day’s work is half an acre, be he man or woman, unless the ground is too full of roots.

5) When they are through with that, they plant beans together among the corn. At this time the children must weed out the grass in the potato patches.

6) Thereupon they start for the first time to cultivate (behauen) the rice and to clean it of grass. A Negro must complete 1/4 acre daily.

7) Now the corn must be cleaned of the grass for the second time, and a little earth put around the stalks like little hills. Some young corn is pulled out, and only 3 or 4 stalks remain. A little earth is also laid on the roots of the beans, all of which the Negroes do at the same time. Their day’s task in this work is half an acre for each.

8) As soon as they are through with the corn, they cultivate (hauen) the rice a second time. The quality of the land determines their day’s work in this.

9) Corn and rice are cultivated (hauen) for the third and last time. A Negro can take care of an acre and more in this work, and 1/4 an acre of rice. Now the work on rice, corn, and beans is done. As soon as the corn is ripe it is bent down so that the ears hang down towards the earth, so that no water collects in them or the birds damage them.

Afterwards the Negroes are used for all kinds of house work, until the rice is white and ripe for cutting, and the beans are gathered, which grow much more strongly when the corn has been bent down. The rice is cut at the end of August or in September, some of it also early in October. The pumpkins, which are also planted among the corn, are now ripening too. White beets are sown in good fertilized soil in July and August, and during the full moon.

Towards the middle of August all Negro men of 16 to 60 years must work on the public roads, to start new ones or to improve them, namely for 4 or 5 days, or according to what the government requires, and one has to send along a white man with a rifle or go oneself.

At the time when the rice is cut and harvested, the beans are collected too, which task is divided among the Negroes. They gather the rice, thresh it, grind it in wooden mills, and stamp it mornings and evenings. The corn is harvested last. During the 12 days after Christmas they plant peas, garden beans, transplant or prune trees, and plant cabbage. Afterwards the fences are repaired, and new land is prepared for cultivating.

Question. What is permitted to Negroes after they have done their required day’s work?

Answer. They are given as much land as they can handle. On it they plant for themselves corn, potatoes, tobacco, peanuts, water and sugar melons, pumpkins, bottle pumpkins (sweet ones and stinking ones which are used as milk and drink vessels and for other things).

They plant for themselves also on Sundays. For if they do not work they make mischief and do damage... They sell their own crops and buy some necessary things.

Question. How much meat, fish, bread, and butter do they receive weekly?

Answer. Their food is nothing but Indian corn, beans, pounded rice, potatoes, pumpkins. If the master wishes, he gives them a little meat when he slaughters. They have nothing but water to drink.

Johann Martin Boltzius (sometimes spelled "Bolzius") was senior minister to the Salzburger community at Ebenezer, Georgia, for 3 decades (1735-65) & was largely responsible for its success. He was a staunch opponent of slavery during the formative years of the Georgia colony. Boltzius was born  in Forst, Germany, southwest of Berlin. His parents, Eva Rosina Muller & Martin Boltzius, earned a modest living as weavers. Young Boltzius won a theology scholarship to the University of Halle (later Martin-Luther-University of Halle-Wittenberg) in Halle, Germany. There he studied Lutheran Pietism, which emphasized salvation by grace, strong ethics, vigorous pastoral leadership, & social compassion. Boltzius then briefly served as inspector of the Latin School of the Francke, or Halle, Orphanage Foundation, an institution that provided charitable services & encouraged Protestant education. Gotthilf August Francke, cofounder & professor of the school, selected Boltzius to serve as senior minister to the Salzburg Protestant refugees who journeyed to Georgia in the fall of 1733 to escape the repressive policies of Catholic archbishop Count Leopold von Firmian.
Posted by Barbara Wells Sarudy at 4:00 AM