.
Nancy Ward (c 1738-1822), Cherokee leader, was probably born at Chota, a Cherokee village on the Little Tennessee River near Fort Loudoun in Monroe County, Tennessee. Her father is said to have been a Delaware Indian who, following the custom in the matriarchal Cherokee society, had become a member of the Wolf clan, when he married Tame Doe, the sister of Atta-kulla-kulla (Little Carpenter), civil chief of the Cherokee Nation.

Nancy (an anglicized version of her Indian name, Nanye’hi), was married at an early age to Kingfisher of the Deer clan, by whom she had a son, Fivekiller, & a daughter, Catharine.

She first won notice in 1755, when her husband was killed during the battle of Taliwa (near present-day Canton, Ga.), a skirmish in the long rivalry between the Cherokees & the Creeks. At once taking his place in the battle line, she helped secure a decisive Cherokee victory. In recognition of her valor, she was chosen Agi-ga-u-e, or “Beloved Woman” of her tribe. In this capacity, she headed the influential Women’s Council, made up of a representative from each Cherokee clan, & sat as a member of the Council of Chiefs.

Her 2nd husband was Bryant (or Brian) Ward. Ward, an English trader who had fought in the French and Indian War, took up residence with the Cherokees & married Nancy in the late 1750s. Ward had a wife, but since Cherokees did not consider marriage a life-long institution, the arrangement apparently presented few problems. Ward & her English husband lived in Chota for a time & became the parents of a daughter, Elizabeth (Betsy).

Ward left the Cherokee Nation sometime prior to 1760, when the suddenly hostile Cherokees destroyed Fort Loudoun & massacred its British garrison. Ward moved back to South Carolina, where he lived the remainder of his life with his white wife & family. Nancy Ward and Betsy visited his home on many occasions, where they were welcomed and treated with respect.

Influenced perhaps by these associations, as well as by her uncle, Atta-kulla-kulla, usually a friend of the English, Nancy Ward seems to have maintained a steady friendship for the white settlers who were gradually establishing themselves along the Holston & Watauga river valleys of eastern Tennessee.

This friendship had important results during the American Revolution. In 1775 or 1776, Nancy Ward is credited with having sent a secret warning to John Sevier, a leader of the Tennessee settlers, of a planned pro-British Cherokee attack. When one settler, Mrs. William Bean, was captured by Cherokee warriors, Nancy Ward personally intervened to save her from death at the stake. Such was Nancy Ward’s repute among the settlers that in October 1776, when the Cherokee villages were devastated by colonial troops, Chota was spared.

Four years later, when another Cherokee uprising was imminent, she again sent a timely warning to the settlers, using an intermediary Isaac Thomas, a local trader. A countering raid was at once organized; as the expedition approached the Cherokee territory-according to the report later sent to Thomas Jefferson, governor of Virginia, noted, “the famous Indian Woman Nancy Ward came to Camp,…gave us various intelligence, & made an overture in behalf of some of the Cheifs [sic] for Peace”

Despite her efforts the Cherokee villages were pillaged, but again Nancy Ward & her family were given preferential treatment. At the subsequent peace negotiations conducted by John Sevier, Nancy Ward spoke for the new defeated Cherokees, again urging friendship rather than war. In 1785, at the talks preceding the Treaty of Hopewell, she again pleaded eloquently for a “chain of friendship” linking the 2 cultures.

Nancy Ward was described by one settler in 1772, as “queenly & commanding” & her residence as outfitted in “barbaric splendor” (Hale & Merritt, I, 59). While sheltering Mrs. Bean after her rescue in 1776, she had learned from her how to make butter & cheese, & soon afterward she introduced dairying among the Cherokees, herself buying the first cattle. In postwar years, she sought further to strengthen the economy of her people by cattle raising & more intensive farming.

Ward exerted considerable influence over the affairs of both the Cherokees & the white settlers & participated actively in treaty negotiations. In July 1781, she spoke powerfully at the negotiations held on the Long Island of the Holston River following settler attacks on Cherokee towns. Leader Oconastota designated Kaiyah-tahee (Old Tassel) to represent the Council of Chiefs in the meeting with John Sevier & the other treaty commissioners. After Old Tassel finished his persuasive talk, Ward called for a lasting peace on behalf of both white and Indian women. This unparalleled act of permitting a woman to speak in the negotiating council took the commissioners aback.

In their response, Colonel William Christian acknowledged the emotional effect her plea had on the men & praised her humanity, promising to respect the peace if the Cherokees likewise remained peaceful. Ward's speech may have influenced the negotiators in a more fundamental way, because the resulting treaty was one of the few where settlers made no demand for Cherokee land. Before the meeting, the commissioners had intended to seek all land north of the Little Tennessee River. Nevertheless, the earlier destruction of Cherokee towns & the tribe's winter food supply left many Indians facing hunger. As a result of the desperate circumstances, Ward & the very old Oconastota spent that winter in the home of Joseph Martin, Indian Agent to the Cherokees & husband of Ward's daughter Betsy.

Again, at the Treaty of Hopewell in 1785, Ward made a dramatic plea for continued peace. At the close of the ceremonies, she invited the commissioners to smoke her pipe of peace & friendship. Wistfully hoping to bear more children to people the Cherokee nation, Ward looked to the protection of Congress to prevent future disturbances and expressed the hope that the "chain of friendship will never more be broken." Although the commissioners promised that all settlers would leave Cherokee lands within six months and even gave the Indians the right to punish recalcitrant homesteaders, whites ignored the treaty, forcing the Cherokees to make addional land cessions.

Though too ill to be present, she sent a vigorous message to the Cherokee Council of May 1817, urging the tribe not to part with any more of its land. But other forces were stronger than her aged voice. At this time, the Cherokee moved from a matriarchal, clan-type of government to a republic much like our own. The new republican order supplanted the old hierarchy among the Cherokees, & by the Hiwassee Purchase on 1819, they gave up all the land north of the Hiwassee River.

Thus forced to leave Chota, Nancy Ward opened a small inn overlooking the Ocoee River in the southeastern corner of Tennessee, near the present town of Benton. She died there in 1822, & was buried on a nearby hill, in a grave later marked by a Tennessee D.A.R. chapter bearing her name. Her grave is beside the graves of her son Five Killer and her brother Long Fellow (The Raven). Thirteen years after her death the Cherokees surrendered all claim to their historic homeland & were transported to new territories in the Southwest. 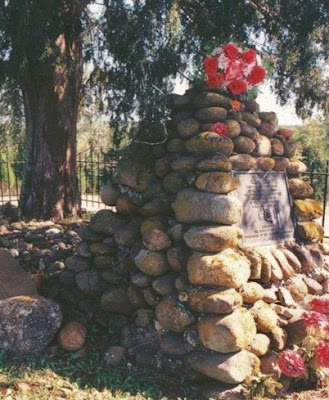