.
Actresses in the 18th-century were generally not regarded with the same respect that male actors were. The stage was not a woman's world, as it was said to be better suited for men. On one hand, women were looked down upon if they acted, as it was not seen as genteel or ladylike. On the other hand, English women actresses often were viewed as celebrities, because they kept the aristocracy & royalty entertained & occasionally socialized with them.

Much was expected from actors during this time, not just mental preperation & memorization but physical work was required from the entire troupe. Women were expected to keep the pace & work just as hard as men. Usually, rehearsals were held every morning for several hours & performed every afternoon or evening. A successful leading lady might have to learn 30 different parts in one season. Acting in the American colonies was even more difficult, often requiring building & assembling a stage with its sets. 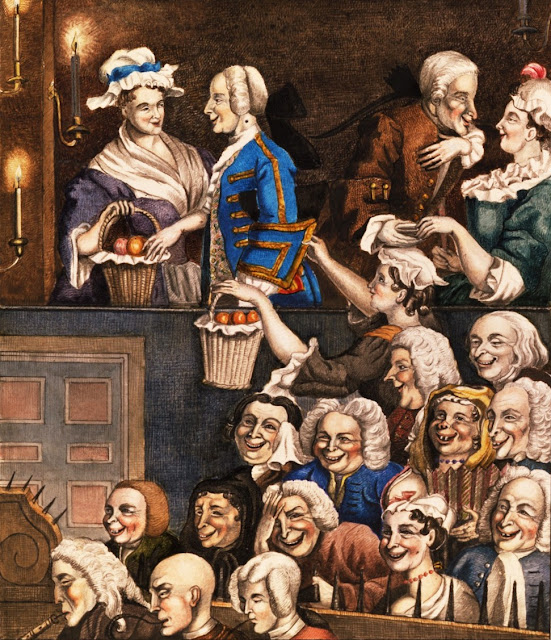 Here William Hogarth depicted The Laughing Audience in 1733, showing a typical 18th-century English theater scene. The wealthier patrons are seated in the boxes, while those theatergoers with less money to spare sat in the pit. A spiked barricade separates the audience from the acting company.

Mrs. Lewis Hallam (d. 1774), leading lady of the principal theatrical company in colonial America, was born in England. Little is known of her background or personal life, although her maiden name may have been Rich. Her daughter Isabella Hallam Mattocks, in answering a query for biographical information in 1800, stated that, “Mr (John) Rich the late Patentee of Covent Garden and his family are my relatives.” John Rich was the father of pantomime in the English theater.

The Hallams were a large theatrical family, but she was in all likelihood the “Mrs. Hallam” who appeared with Lewis Hallam, when he made his stage debut in “Mr. [William] Hallam’s Company of Comedians” at York Buildings, London, on July 17, 1735. William Hallam, 1712-1758 the older brother of Lewis, was a restless entrepreneur who, after meeting some success with less ambitious theatrical ventures, in 1744, assembled a company to present stock plays “between the two parts of a concert.” In the next year Lewis Hallam & his wife became regular members of the company, Mrs. Hallam appearing as Lady Anne in Richard III, Hypolita in She Would & She Would Not, Almeria in The Mourning Bride, Miranda in Dryden’s version of The Tempest, & Lady Percy in Henry IV. 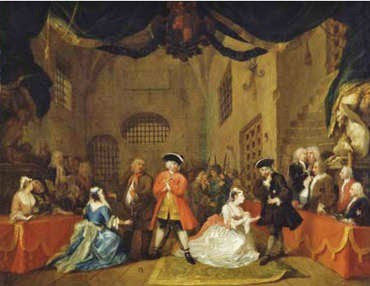 As this painting depicts, at this time it was still common for members of the audience to pay a little extra to sit on the stage itself. This ensured that everyone in the house could see their fine clothes, hear their witty comments, & the young gallants could get close to the actresses. When an actor had a benefit performance, they would squeeze as many seats as they could on to the stage in order to maximise their profit. The actors barely had enough room to perform & were subject to interference from the spectators.

In December 1751, William Hallam went into bankruptcy. Despairing of success in England, he organized a troupe to invade the New World under his brother’s direction. Lewis (1714-1756) & his wife Sarah were to play the principal roles; their sons, Lewis , Jr. (1740-1808), and Adam, & their daughter Isabella (b 1746) would go along to learn the profession. The company reached Virginia in June 1752, & gave their first performance, a version of The Merchant of Venice, at a refurbished theatre in Williamsburg on Sept. 15, Mrs. Hallam playing Portia.

Shakespeare's plays became increasingly popular during the 18th century but were reworked to suit the tastes of the day. His style was still felt to be too erratic, & poets such as Alexander Pope carefully tidied up any uneven verse lines. Shakespeare's ending to King Lear was felt to be too distressing and Nahum Tate's revised version (where Cordelia and the King survive) was preferred to the original.

Constrained by the limited population centers in rural colonial life, the Hallam company were necessarily itinerant, playing short seasons in Williamsburg, New York, Philadelphia, Charleston, & other provincial capitals. In each new locale they would prepare or build a playhouse, having overcome the inevitable resistance of those who felt the stage to be a corrupting influence, & then work their way through a set round of stock plays. 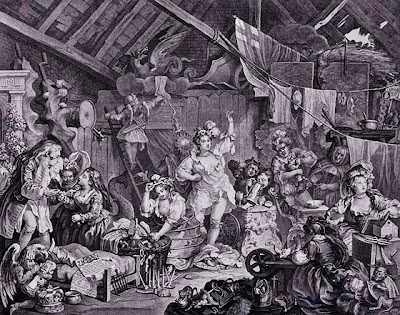 1738 Hogarth, Actresses in a Barn, One of a series of prints called "Four Times of the Day," shows a group of actresses gathered in a barn getting ready for their final performance.

Mrs. Hallam appeared repeatedly as Indian in Richard Steele’s The Conscious Lovers, as Angelica in William Congreve’s Love for Love, as Milwood in George Lillo’s The London Merchant, as Andromache in Ambrose Philips’ The Distrest Mother, as Calisto in Nicholas Rowe’s The Fair Penitent, as Cordelia in Nahum Tate’s version of King Lear, as Columbine in the pantomimes.

The Hallams’ professional experience followed a common colonial pattern: failure at home, but they won an honorable place in the history of their profession by pioneering in America. An English visitor recorded his pleasure & surprise “on finding performers in this country equal at least to those who sustain the best of the first characters in [England’s] most celebrated provincial theatres.”

Of her style & ability there are few records. Long after she had given up Columbine and the gay heroines for character roles, the diarist Alexander Graydon described her as “a respectable, matron-like dame, stately or querulous as occasion required, a very good Gertrude [Hamlet], a truly appropriate Lady Randolph [John Home’s Douglas] with her white handkerchief & her weeds; but then, to applaud, it was absolutely necessary to forget, that to touch the heart of the spectator had any relation to her function” (Memoirs, p. 76).

In 1754 the Hallam company was in Charleston (then Charles Town), & Lewis decided to extend their territory by making an expedition to Jamaica. Here they joined forces with the remnants of an earlier company established under the leadership of John Moody.

Among the actors was David Douglass, & when Lewis Hallam died in 1756, his widow married Douglass & the company came under his control. Douglass brought his itinerant players back to the mainland in the summer of 1758 & in 1763, with a manager’s shrewd sensitivity to the public pulse, renamed them “The American Company of Comedians.”

By now Mrs. Hallam-Douglass had given up the more demanding roles to younger talents, but she had still to confront the primitive theatres, the haphazard conditions of production, & the perils of 18th-century transportation. Her death occurred sometime after the spring of 1774, but circumstantial evidence supports the traditional story, reported in a New York paper, that she died in Philadelphia, in a house near the Southwark Theatre, & was buried in a Presbyterian cemetery, since destroyed, at Third & Arch streets. David Douglass, turning to other pursuits in Jamaica, remarried in 1778, & died in 1786. 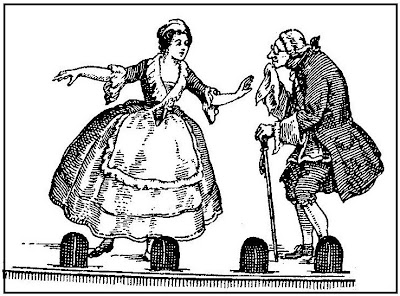 Of the other actresses prominent to the Hallam company during Mrs. Hallam’s lifetime, the one who first succeeded to her leading roles was Margaret Cheer. Miss Cheer seems to have come from London late in 1763, & joined the company in Charleston.

A letter of February 1764, from that city declares that “Her fine person, her youth, her voice, & Appearance &c conspire to make her appear with propriety-Such a one they much wanted as Mrs Douglass was their chief actress before &…on that account had always too many Characters to appear in.” (Rankin, p. 102).

Margaret Cheer rose quickly in the ranks, & by the winter of 1766, when the company was in Philadelphia , had taken over Cordelia, Juliet, Lady Macbeth, & Indiana. She was Imogen in the first American production of Cymbeline & played the leading female role in Thomas Godfrey’s The Prince of Parthia (1767), the first play by a native American to be performed professionally. A Philadelphia newspaper called her “one of the best players in the Empire,” suggesting that she had some reputation before joining the company.

On Aug. 28, 1768, the Pennsylvania Chronicle reported her marriage to a young Scottish nobleman, Lord Rosehill, then visiting America. The marriage, if it did in fact take place, did not last; that November she appeared again with the company under her maiden name, but retired the next year. During her brief career she played more than fifty roles, including Cleopatra in All for Love, Portia, Ophelia, Marcia in Cato, Mrs. Beverly in The Gamester, Mrs. Sullen in The Beaux’ Stratagem, & the Lady in Comus.

Of longer prominence in the company was a niece of Mrs. Hallam-Douglass whom David Douglass brought back from England after a recruiting trip in 1765. Though she is recorded only as “Miss Hallam,” it has been suggested that she was the Nancy (Ann) Hallam who had appeared with the company in children’s roles in Philadelphia in 1759, & soon afterward dropped from view, perhaps having been sent to London for musical training. Whatever her identity, Miss Hallam made an immediate success in ingenue parts & the singing roles of afterpieces, & between 1766 & 1774 she steadily advanced in the female ranks of the troupe.

In 1769, after playing her first Juliet in New York on May 8, she succeeded Margaret Cheer as leading lady. In the next five years, she was applauded as Polly in The Beggar’s Opera, as Ophelia & Imogen, as Angelica in Love for Love, as Maria in George Barnwell, as Almeria in The Mourning Bride, Lucinda in The Conscious Lovers, Miss Sterling in The Clandestine Marriage, Charlotte Rusport in The West Indian. 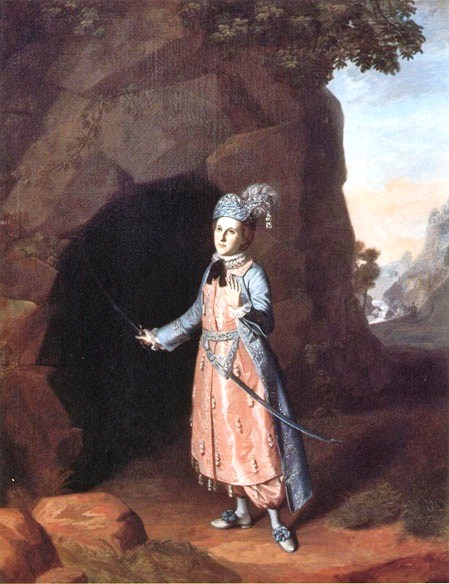 Some notion of her acting is preserved in Charles Wilson Peale’s portrait of her as Imogen, now at Colonial Williamsburg. Several effusions appearing in the Maryland Gazette in 1770 & 1771 (“The Musick of her tongue! The vox liquida, how melting!…How true & thorough her Knowledge of the Character she personated!”) suggest that she was at least capable of exciting a warm response in impressionable young men. When the Hallam company ended its season in Charleston in 1774, Miss Hallam went to Falmouth, England, where she vanishes from the records of the stage. She has been identified as the “Miss Hallam” who married John Raymond, organist of Kingston, Jamaica, in 1775, but without supporting evidence. 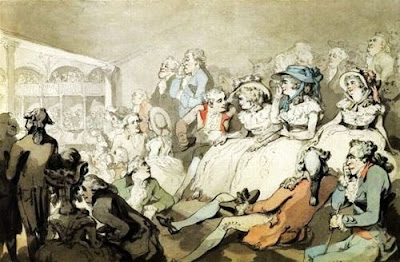 Of Mrs. Lewis Hallam’s own children, her daughter Helen (Sarah?) appeared wit the company for 2 years, making her debut as Jessica in the troupe’s first Williamsburg performance of The Merchant of Venice, in 1752. Her portrayals were mainly chambermaids & ingénues, & she seems to have left the stage in 1754. Lewis Hallam, Jr., remained with the traveling theatrical company throughout, becoming leading man after his father’s death. As principal of a reorganized Hallam company, he added fresh laurels to the family’s acting reputation in America in the years following the Revolution. Another daughter, Isabella (1746-1826), remained in England, under the care of a relative, when the rest of the family first went to America. Later, as Mrs. George Mattocks, she achieved fame in England as a comedienne & singer.