.
Judith Sargent Murray (1751-1820), author & feminist, was born in Gloucester, Massachusetts, the eldest of the 8 children (4 died in infancy) of Winthrop & Judith (Saunders) Sargent. Her father was a wealthy shipowner & merchant, & both parents came from families long prominent in the town. Her brother Winthrop, Jr., born in 1753, served with distinction in the Revolutionary War, rising to the rank of major; he was later secretary of the Northwest Territory (1787) & first governor of the Mississippi Territory (1798). Another brother, Fitz-William, made a fortune in the China & India trade. 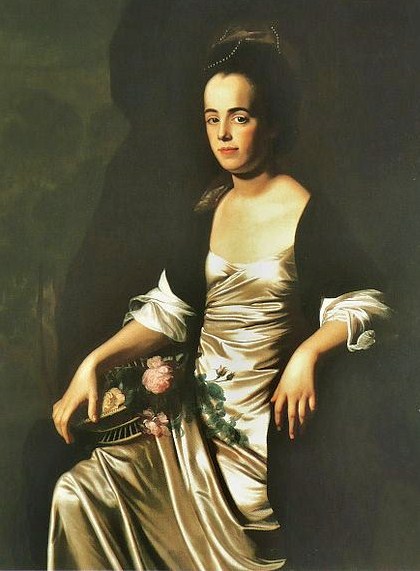 As a girl Judith showed such an intellectual bent, that she was allowed to share Winthrop’s lessons as he prepared with a local minister for Harvard, & during his college vacations he reportedly helped her continue her studies.

Judith Sargent was married at 18 to John Stevens, a sea captain & trader. The couple lived in the Gloucester mansion known today as the Sargent-Murray-Gilman-Hough House. It was probably built for them by her father. They had no children.

In her twenties, Mrs. Stevens was “seized with a violent desire to become a writer.” She began composing occasional verse, but as the American Revolution approached, she found her attention turning to social questions & adopted the essay form.

The talk of liberty & human rights that was rife in patriot families prompted her, like her contemporaries Abigail Adams & Mercy Warren, to challenge prevailing assumptions about the status of women. In 1779 she wrote an essay declaring that the sexes had equal minds & calling for more thorough education for girls; her first published piece was her “Desultory Thoughts of Self-Complacency, Especially in Female Bosoms,” which appeared in 1784 in the Gentlemen & Lady’s Town & Country Magazine, a short-lived Boston periodical, over the signature “Constantia.” A healthy self-respect, she argued, would prevent young women from rushing into marriage merely to gain status & avoid spinsterhood.

Meanwhile Judith Sargent Stevens, like her father, had been attracted to the liberal religious doctrines of Universalism. The Sargents had first heard of these beliefs from an English seaman who visited Gloucester in 1770. Four years later, when the itinerant preacher John Murray (1741-1815), now known as the founder of the Universalist Church in America, arrived in town, they offered such support that he decided to settle there. Murray gathered a congregation which, after being expelled from the First Parish Church, in 1780 built the first Universalist meetinghouse in America, on land donated by Winthrop Sargent. Apparently, Judith Sargent Stevens was also attracted to the preacher himself. 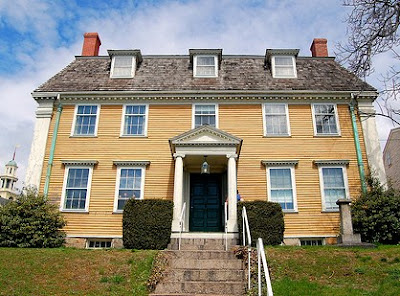 High-style Georgian domestic architecture, the house was built in 1782 for Judith Sargent Murray (1751-1820) The Sargent House Museum, 49 Middle Street, Gloucester, Massachusetts. Her husband left her only 4 years later, sailing for the West Indies.

The war years brought hard times to Gloucester; & in 1786, to avoid imprisonment for debt, John Stevens fled to the West Indies, where he lived only briefly before dying on the Dutch island of St. Eustatius. In 1788, his widow married her pastor, John Murray.

In her new marriage, Judith Sargent Murray had 2 children, George, born in 1789, who lived only a few days, & Julia Maria born in 1791. And, the author “Constantia” began to renew her literary efforts. Her poems, pre-Romantic in feeling & couched in Popean couplets, began to appear in the new Massachusetts Magazine, & in February 1792 this literary monthly inaugurated an essay series by “Constantia” entitled “The Gleaner.” Writing in the person of an imaginary “Mr. Vigillius,” the author expressed her opinions on religion, politics, education, & the manners & customs of the day, illustrating her points with fictional narratives. The series was a favorite with the magazine’s readers & continued until August 1794.

A frequent Murray theme was the upbringing of girls. Mrs. Murray’s longstanding opinions on this subject had been strengthened by reading the Englishwoman Mary Wollstonecraft’s Vindication of the Rights of Woman (1792). Mrs. Wollstonecraft’s French Revolutionary fervor did not sit well with Judith Murray, a staunch Federalist who believed that her own country’s Revolution had carried it far enough toward democracy. She nevertheless heartily approved the Vindication’s plea that women be educated to be the “sensible & informed” companion of man & the even more radical demand that she be equipped to earn her own living. Certainly Mrs. Murry understood this need in her own marriages.  In the United States, Mrs. Murray felt, “the Rights of Women’ begin to be understood;” she was encouraged by the many female academies being established & looked forward to seeing the present generation of girls inaugurate “a new era in female history.”

In 1793, the Murrays moved to Boston. The lifting that year of the Revolutionary ban on dramatic performances gave Mrs. Murray a new outlet for her literary ambitions. Her play The Medium was probably the Federalist Street Theatre’s first production by an American author, but it played only one performance (Mar. 2, 1795). The critic Robert Treat Paine, Jr., attacked her The Traveller Returned, produced on Mar. 9, 1796, as pedantic & tedious, & it fared little better.

Once again, Judith Sargent Murry began to experience financial worries. Preacher John Murray had little head for practical affairs, & his health was failing. To increase the family income he proposed that his clever wife’s essays be published.  He guessed correctly.  More than 750 subscribers were secured, headed by George Washington, & The Gleaner appeared in 3 volumes in 1798, with an elaborate dedication to President John Adams. The series today holds a place as a minor classic in the literature of the young republic, bearing comparison with the essays of Mrs. Murray’s contemporaries Joseph Dennie, Philip Freneau, & Noah Webster.

A few of her poems were published in Boston periodicals in the early years of the new century, under the pen names “Honora-Martesia” & “Honora;” but most of her energies went into caring for her husband, who suffered a stroke in 1809, & was thereafter paralyzed, until his death in 1815.

Their financial straits were relieved by the marriage of their daughter in 1812, to Adam Louis Bingamon, son of a wealthy planter in the Mississippi Territory, whom she had met while he was a student at Harvard.

Mrs. Murray organized & edited her husband’s Letters & Sketches of Sermons (3 vols., 1812-13) & his autobiography, published in 1816, as Records of the Life of the Ref. John Murray, written by Himself, with a Continuation by Mrs. Judith Sargent Murray.

In 1816, she moved to live with her daughter in Natchez, Miss., where she died in 1820, aged 69. She was buried in the Bingamon cemetery on St. Catherine’s Creek, overlooking the powerful & poetic Mississippi River.