.Isabella Marshall Graham, (1742-1814), teacher & early charitable worker, the daughter of John & Janet (Hamilton) Marshall, was born in Lanarkshire, Scotland, & grew up on an estate at Eldersley near Paisley. Her father, a landowner, raised Isabella & her brother in comfort, & a legacy from her grandfather, spent at her own request on a “finished education,” enabled her to attend the boarding school of Mrs. Betty Morehead for 7 years. The family was known for piety, in the stern tradition of Scottish Presbyterian Calvinism, & the child early manifested a religious interest. At 17, she became a communicant of the Church of Scotland under the ministry of Dr. John Witherspoon, later president of the College of New Jersey (Princeton). 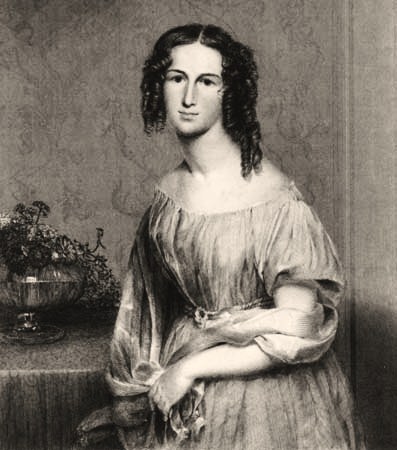 Isabella Marshal Graham from the Library of Congress

She was married in 1765 to Dr. John Graham of Paisley, a widower & a “gentleman of liberal education, & of respectable standing.” Planning to settle in America, they sailed 2 years later to Canada, where Graham was physician to a British army regiment, the Royal Montreal, & Fort Niagara. They left behind in Scotland an infant son who died within the year; in North America their other 4 children were born: Jessie, (Mrs. Hay Robinson), Joanna Graham Bethune, Isabella (Mrs. Andrew Smith), & John. Mrs. Graham enjoyed life at Fort Niagara raising her babies, although she found the soldiers’ lack of religion appalling. Her own faith enabled her to accept with devout resignation the death of her husband in Antigua, where they had recently been transferred in 1773, just before the birth of their 5th child.

Left almost penniless, Mrs. Graham sailed with her large family back to the security of her father in Scotland, only to find that he, too, was in need. he was not prepared to support himself, much less his daughter I her 5 young children. For 3 years she lived in a thatched cottage at Cartside, in such poverty, that she & her children sometimes had only porridge & potatoes to eat. Unable to support her father & children on her meager widow’s pension, she opened a small school in Paisley. Around 1780, on the invitation of some “friends of religion,” she founded a boarding school for young ladies in Edinburgh. As her situation improved, she was able to indulge in charity, becoming “ingenious in contrivances to do good.” She used some of her income from tuitions to help people in small businesses, taking payment in their manufactured articles; she served as almoner for her friend Lady Glenorchy, a philanthropist & a patron of the school; & she organized a mutual-benefit Society for the Relief of the Destitute Sick. 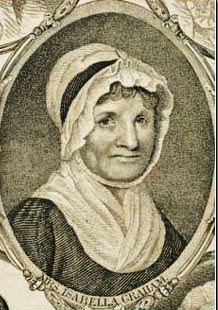 Her desire to return to America, which she thought “the country where the Church of Christ would eventually flourish,” was encouraged by Dr. Witherspoon & “many respectable persons” of New York. In 1789, she came to New York City with her daughters & established a girls’ school that soon had more than 50 students & a distinguished list of patrons. Uniting with the Cedar Street Scotch Presbyterian Church, Mrs. Graham found herself in a congenial religious & social climate. Her daughters all married New York merchants. Once they were comfortably settled, she retired from teaching, lived with one or another of them, & devoted herself to philanthropy.

In 1797, Mrs. Graham joined with her daughter Joanna & her friends Sarah (Ogden) Hoffman (1742-1821) & Elizabeth Bayley Seton, who later became a Saint in the Catholic church, in organizing the Society for the Relief of Poor Widows with Small Children-one of the earliest charitable associations in the United States & one of the first instances of women taking organized action on their own. Mrs. Graham was chosen “First Directress” of the society supervising its board of managers. Under her frugal management, the society aided 98 widows with 223 children during the winter of 1797-98, & the number increased during the years following. With funds raised by subscription &, after 1802, when the society was given a New York State charter. With money from legislative grants, they purchased food & distributed it to needs widows; & gave direct financial relief. The society also sought employment for the widows. Buying a house for the purpose, Mrs. Graham & her associates took orders for needlework. During the winter of 1807-08, when work was scarce, they gave out flax & spinning wheels, & paid for the products. They employed widows to teach schools in different parts of the city. Some of Mrs. Graham’s former pupils, under her supervision, conducted a school for the widows’ children. The society also opened two Sabbath schools for the instruction of adults, one of which Mrs. Graham herself taught.

When her daughter Joanna Bethune organized the Orphan Asylum Society in 1806, Mrs. Graham presided over the founding meeting & in 1810, became a trustee. With her daughter, she taught for a time at the asylum’s school, & she gave regular religious instruction at the school as well as to children in the public almshouse. She regularly visited needy families, helping them with her own money & with religious encouragement; often she would be away from home all day on various charitable missions. All kinds of destitute & unfortunate women came under her care. She called on female inmates of the Lunatic Asylum & sick women prisoners & served as president of the Ladies Board of the Magdalen Society form its organization in 1811, until her death. In her final year, at 71, she established an adult school for young people working in factories, which met on Sundays, & presided over the organization of her daughter’s society for establishing a female House of Industry to provide employment for needy women.

No longer strong enough for extensive visiting, Mrs. Graham spent much of her last 2 years in prayer & meditation. She died of “cholera morbus” in New York City at the home of her son-in-law Divie Bethune. A biography, The Power of Faith: Exemplified in the Life and Writings of the Late Mrs. Isasbella Graham, of New York (1816), published by the Bethunes, was widely circulated here & in Great Britain, with more than 50,000 copies printed in the United States before 1852 (Sarah J. Hale, Woman’s Record, 2nd ed., 1855, pp. 331-32). The widest circulation was in American Tract Society editions. In the text, her daughter & son-in-law recall her early efforts to encourage industry among the female poor:

“In the winter 1807-8, when the suspension of commerce by the embargo, rendered the situation of the poor more destitute than ever, Mrs. Graham adopted a plan best calculated in her view to detect the idle applicant for charity, & at the same time to furnish employment for the more worthy amongst the female poor. She purchased flax, & lent wheels, where applicants had none. Such as were industrious, took the work with thankfulness, and were paid for it; those who were beggars by profession, never kept their word to return for the flax or the wheel.” (p. 59)