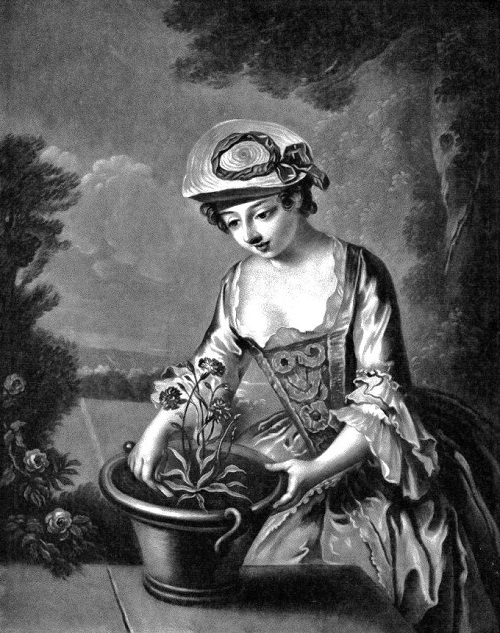 Martha Daniell Logan (1704-1779), colonial teacher and gardener, was born in St. Thomas Parish, S.C., the 2nd child of Robert Daniell and his second wife, Martha Wainwright.  Her father, who may originally have been a Virginian, had arrived in South Carolina from Barbados in 1679; already propertied, he increased his holdings in real estate, slaves, and ships over the years. In 1704 and 1705, he had a stormy term as lieutenant governor of North Carolina; and he served twice in the same capacity in South Carolina from 1715 through 1717.

Nothing is known of his daughter Martha’s education, but it surely consisted of reading and writing English along with the skills of needlework. Her childhood was not prolonged. In May 1718, when she was 13, her father died; and on July 30, of the following year she was married to George Logan, Jr. At about the same time her mother married the senior Logan, an Aberdeen Scot who, like Daniell, had held offices of trust in the province. The younger Logans spent their early married years on a plantation some 10 miles up the Wando River from Charles Town, on land which Martha had inherited from her father. There, between 1720 and 1736, 8 children were born to them: George, Martha, Robert Daniell (who died as a child in 1726), William, John, Frances, Anne, and finally another Robert who also died before reaching adulthood.

As early as Mar. 20, 1742, Martha Logan advertised in the South Carolina Gazette that she would board students who would be “taught to read and write, also to work plain Work Embroidery, tent and cut work for 120 l. a year,” at her house up Wando River.  Twelve years later, after she had removed to Charles Town, the Gazette of Aug. 4, 1754, carried her proposal for a boarding school in which a master of writing and arithmetic would supplement her instruction in reading, drawing, and needlework. Tradition had it that she also managed the Logan plantation, though this is less certain, as her husband did not die until July 1, 1764.  Her first advertisement for a school did, however, offer for sale the home estate and other properties, an offer which she repeated on Mar. 13, 1749, when she announced that she acted as attorney for her son George Logan of Cape Fear. 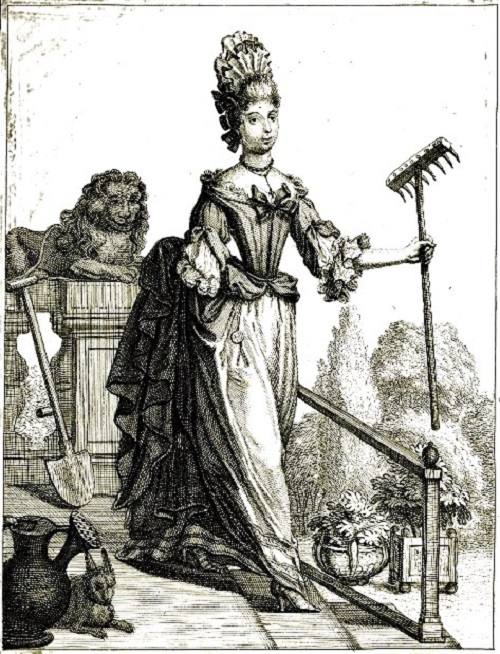 Nicolas Bonnart I (French printer, c 1637-1718) An image of a 17C lady interested in gardening. Her cat guards the watering can, as she carries a rake and a spade sits behind her.
She is best known for her interest in horticulture. She is assumed to be the “Lady of this Province” whose “Gardener’s Kalendar” was published in John Tobler’s South Carolina Almanack for 1752, according to the South Carolina Gazette of Dec. 6, 1751.  Here is her Kalendar from 1756.
Tobler's South Carolina Almanack of 1756.
Directions for Managing a Kitchen Garden every month of the year Done by a Lady
January
Plant peas and Beans: Sow Spinage for Use and for Seed: that which is preserved for Seed must never be cut: a small Quantity will yield plentifully in rich ground.
Sow Cabbage for Summer Use, when they are fit transplant them into rich Earth.
Sow Parsley. Transplant
Artichokes into very rich mellow Ground and they will bear in the Fall.
This month all kinds of Fruit-Trees may be Transplanted.
February
Sow Celery, Cucumbers, Melons, Kidney-Beans, Spinage, Asparagus, Radish.
Parsley, Lettice, to be transplanted in shady Places: they must be moved young and watered every Morning: Pond or Rain Water is the best.
If the season does not prove too wet, this Month is best for
planting all Sorts of Trees, except the Fig, which should not be moved 'til March, when the suckers may be taken from the Roots of old Trees. The Fig will not bear pruning.
The middle of this Month is the best for Grafting in the Cleft.
If Fruit-Trees have not been pruned last Month, they must not be delayed longer.
About the Middle of this Month, sow Spinage, Radish, Parsley and Lettice for the last time.
Plant Dwarf and Hotspur Pease.
Sow Onions, Carrots and Parsnips; and plant out Carrots, Parsnips, Cabbage and Onions, for Seed the next Year.
Plant Hops, Strawberries, and all kinds of aromatic Herbs
March
Whatever was neglected last Month, may be done in this, with good Success, if it is not too dry; if it be, you must water more frequently.
Now plant Rounceval Pease and all manner of Kidney Beans.
April
Continue to plant aromatic Herbs Rosemary, Thyme, Lavender etc. and be careful to weed and water what was formerly planted. Lettice, Spinage and all kinds of Salading may be
planted to use all the Summer but they must be frequently watered and shaded from the Sun.
May
This month is chiefly for weeding and watering: Nothing sown or planted does well.
June
Clip Evergreens, and Herbs for drying, Thyme, Sage, Carduus, Rosemary, Lavender, etc.
Sow Carrots, Parsnips and Cabbage.
If the Weather is dry and hot the Ground must be well
watered, after being dug deep and made mellow.
Straw or Stable Litter well wetted and laid pretty thick upon the Beds where Seeds are sown, in the Heat of the Day, and taken off at Night is a good expedient to forward the Growth.
July
What was done last Month may also be done this. Continue to water, in the evening only.
The latter end of this Month sow Pease for the Fall.
Water such things as are going to seed, is being very needful to preserve good Seed.
Turnips and Onions may be sown;
Leeks, scallions and all of this Tribe planted.
August
Sow Turneps and another crop of Hotspur or Dwarf Pease.
Still Continue to weed and water as before.
September
Showers of Rain will be frequent.
Now prepare the ground for the following Seeds viz.
Spinage, Dutch brown Lettice, Endive, and other crop of Pease and Beans.
Now you may inoculate with Buds. 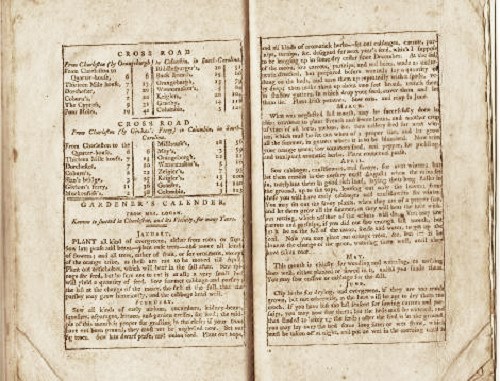 The the calendar and a variant version appeared often in South Carolina and Georgia almanacs into the 1780’s. The Pennsylvania botanist John Bartram met Martha Logan briefly in 1760; and, at least through 1765, they carried on an eager exchange of letters, seeds, and plants. “Her garden is her delight,” wrote Bartram to his London correspondent Peter Collinson.

It was also a source of income. The South Carolina Gazette of Nov. 5, 1753, gave notice that Daniel (Robert Daniell) Logan sold imported seeds, flower roots, and fruit stones at his “mother’s house on the Green near Trotts point,” but perhaps because of his death the nursery business soon passed into Martha Logan’s hands, as a diary reference of 1763, and a newspaper advertisement of 1768 attest. Martha Logan died in Charleston in 1779. Martha Logan was buried in the family vault, since destroyed, in St. Phillip’s churchyard, Charleston.
Posted by Barbara Wells Sarudy at 4:00 AM