Dogs & cats appear in portraits of 18C American women, but I am not sure if these pets are emblems or symbols or copies of English prints, or are they actual pets?

Before the 1760s, most dogs appear in colonial American paintings with children. Smaller pet dogs often were referred to as comfort dogs. Most other dogs depicted in 18C English & Anglo American paintings were sporting dogs.  William Shakespeare had noted fox-hunting hounds in A Midsummer Night's Dream, when Theseus, duke of Athens, tells Hippolyta of "the music of my hounds, matched in mouth like bells / Each under each. A cry more tunable / Was never holloed to nor cheered with horn." 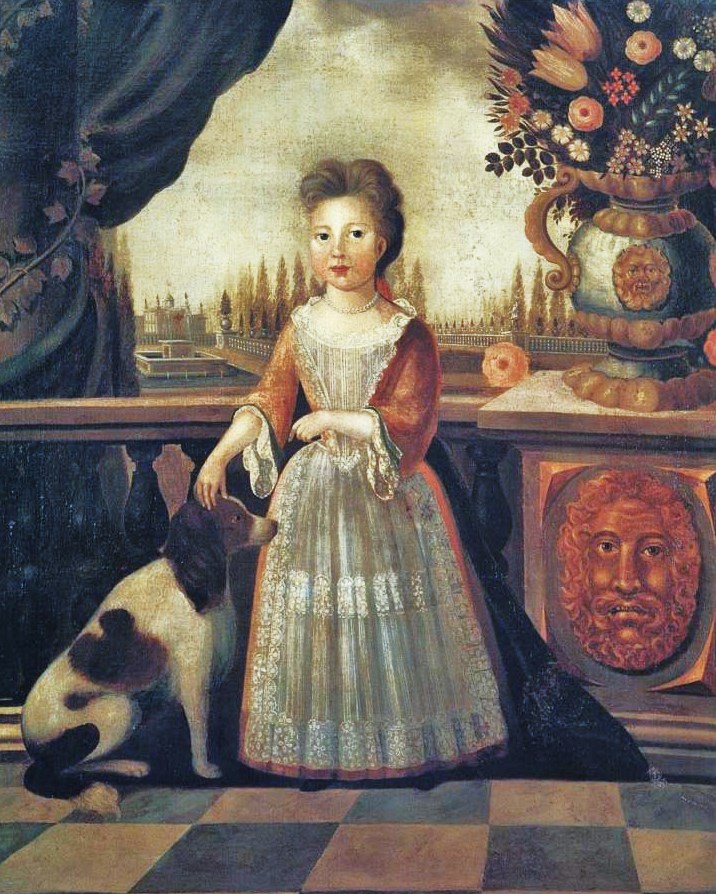 During the 17C in colonial British America, life for a dog could prove tenative, especially during the Salem witch trials. From June to September in 1692, 156 people were accused; 14 women, 5 men, & 2 dogs were hanged--children accused the dogs of giving them the "evil eye."

However, Pennsylvania's founder William Penn (1644-1718) took a more sympathetic approach to dogs.  He wrote in his Reflexions and Maxims that "men are generally more careful of the breed of their horses and dogs than of their children." 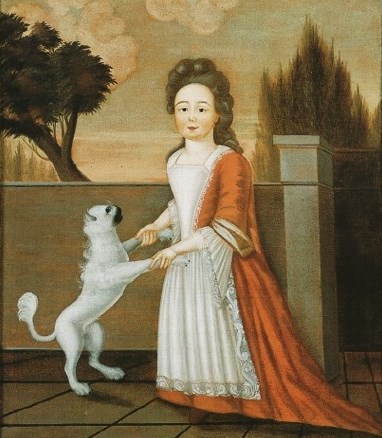 An increase in dogs as pets occurred just as scientific classification of species of plants & animals was growing. The 1st official classification of English breeds was published in 1570, by British physician John Caius (1510-1573) in De Canibus Britannicis, or Of English Dogges.  Among other types, he identified bloodhounds & terriers, otter hounds & Maltese. During the 18C, an era of taxonomies & catalogues, Georges Buffon (1707-1788) & Swedish naturalist Carl Linnaeus (1707-1778) expanded on the definition of Caius, with Linnaeus listing such animals as the Shepherd's Dog, the Pomeranian, the Iceland Dog, the Lesser Water Dog, the Mastiff, & the Barbet. 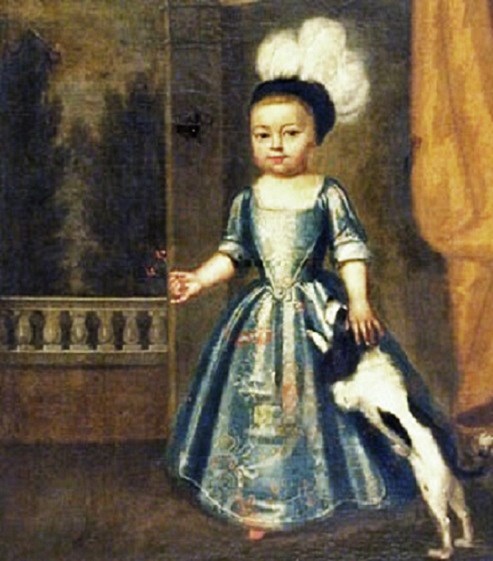 As the scientific interest in dog species grew, the expanding love of humans for canines was endorsed by philosophers, playwrights, and poets. Voltaire wrote, "the best thing about man is the dog." Alexander Pope declared that "histories are more full of examples of fidelity of dogs than of friends."

In Pope's Essay on Man, he writes condescendingly of Native Americans & their faithful dogs.
Lo, the poor Indian! whose untutor'd mind
Sees God in clouds, or hears him in the wind;
His soul proud Science never taught to stray
Far as the Solar Walk, or Milky Way;
Yet simple Nature to his hope has giv'n,
Behind the cloud-topp'd hill, an humbler heav'n;
Some safer world in depth of woods embrac'd,
Some happier island in the wat'ry-waste,
Where slaves once more their native land behold,
No fiends torment, no Christian thirst for gold.
To be, contents his natural desire,--
He asks no angel's wing, no seraph's fire;
But thinks, admitted to that equal sky,
His faithful dog shall bear him company. 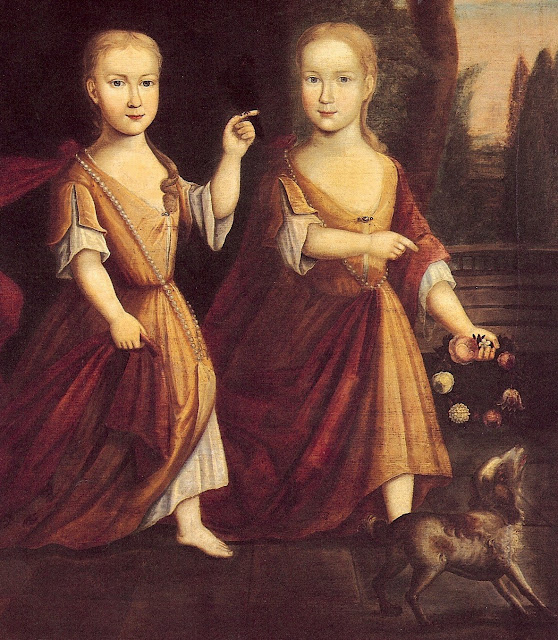 Writing tributes to beloved pets increased into the 18C.  In 1693, English poet & diplomat Matthew Prior (1664-1721) wrote a short elegy at the death of True, a pet of Queen Mary II:
Envious Fate has claim'd its due,
Here lies the mortal part of True. 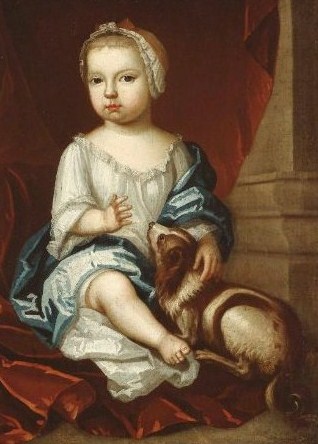 1730s Child of the Pierpont Family with Dog

In the British American colonies in 1738, Benjamin Franklin wrote, "There are three faithful friends—an old wife, an old dog, and ready money." 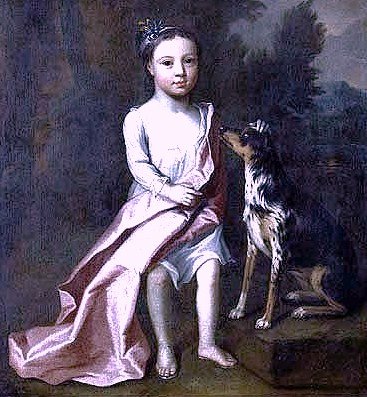 The rise in fox hunting in both England and its American colonies spawned a need for a medium-sized hound with the stamina to follow prey for miles, a keen nose for scent, & a bark that could summon his master from a distance. While women did not participate in the hunt itself, they were part of the audience & the elegant suppers that followed the hunt.

One of the first packs of hunting dogs was brought to America in 1650 by Robert Brooke of Maryland. They were black & tan & chased the slower gray fox. Often recorded as English hounds, these dogs now are thought to have been the Irish Kerry Beagle.

Historian James Horn tells us that in 1799, a wry New England minister gave a glimpse of the sport:

From about the first of Octor. this amusement begins, and continues till March or April. A party of 10, and to 20, or 30, with double the number of hounds, begins early in the morning, they are all well mounted. They pass thro' groves, Leap fences, cross fields, and steadily pursue, in full chase wherever the hounds lead. At length the fox either buroughs out of their way, or they take him. If they happen to be near, when the hounds seize him, they take him alive, and put him into a bag and keep him for a chase the next day. They then retire in triumph, having obtained a conquest to a place where an Elegant supper is prepared. After feasting themselves, and feeding their prisoner, they retire to their own houses. The next morning they all meet at a place appointed, to give their prisoner another chance for his life. They confine their hounds, and let him out of the bag—away goes Reynard at liberty—after he has escaped half a mile—hounds and all are again in full pursuit, nor will they slack their course thro' the day, unless he is taken. This exercise they pursue day after day, for months together. This diversion is attended by old men, as well as young—but chiefly by married people. I have seen old men, whose heads were white with age, as eager in the chase as a boy of 16. It is perfectly bewitching. The hounds indeed make delightful musick—when they happen to pass near fields, where horses are in pasture, upon hearing the hounds, they immediately begin to caper, Leap the fence and pursue the Chase—frequent instances have occurred, where in leaping the fence, or passing over gullies, or in the woods, the rider has been thrown from his horse, and his brains dashed out, or otherwise killed suddenly. This however never stops the chase—one or two are left to take care of the dead body, and the others pursue. 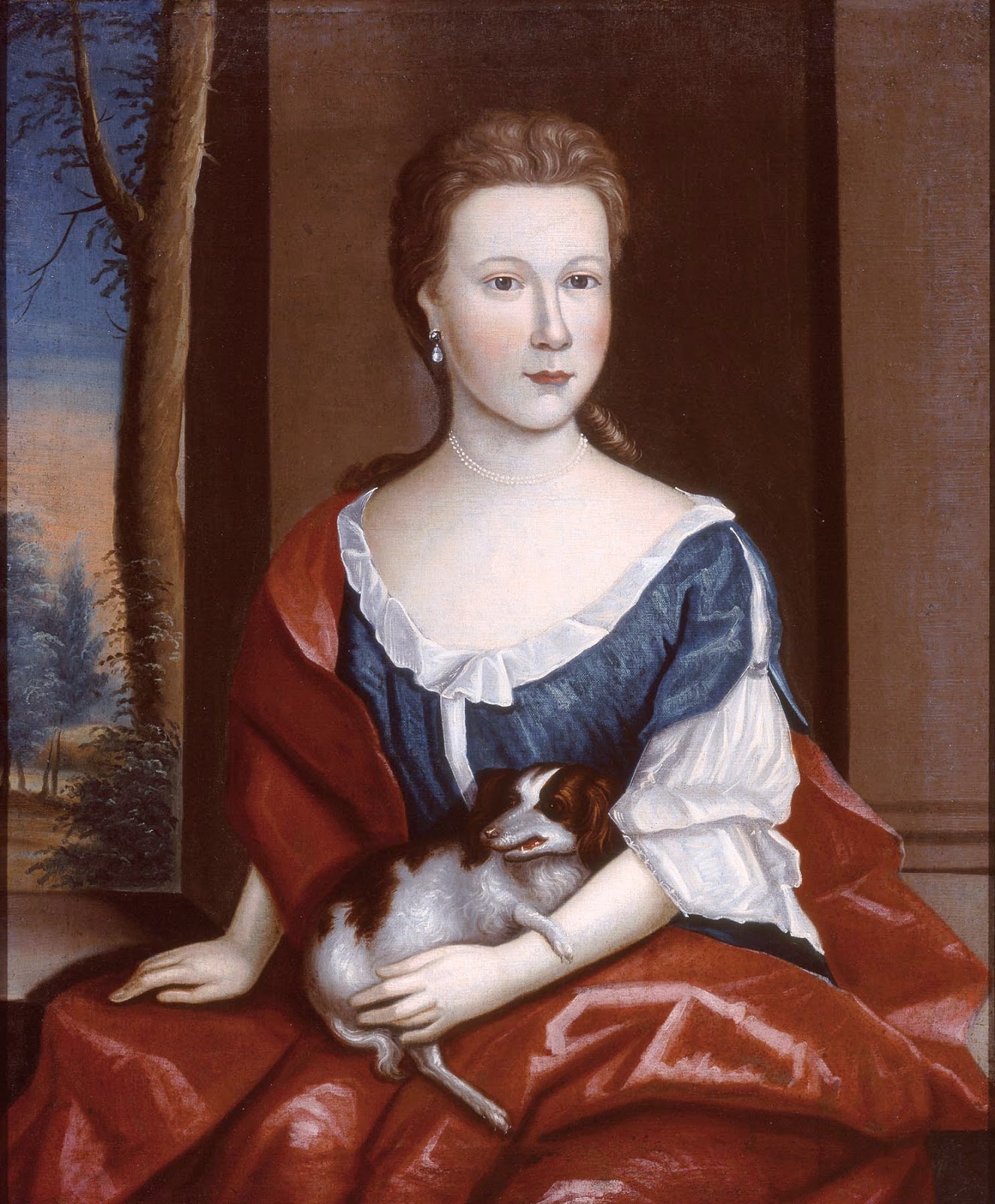 1720s-30s Gerardus Duyckinck (1695-1746). Around 1735, the New York artist Gerardus Duyckinck painted the portrait of young Jacomina Winkler, who was probably 10 or 12.  She is holding a very unhappy, probably fanciful, Cavalier King Charles Spaniel in her lap.  Poses & dogs were often copied from English mezzotint engravings.

Avid fox hunter George Washington, who named his dogs Sweet Lips, Venus, & True Love, during the Revolutionary War, even returned a dear pet, a stray terrier, to the enemy - its owner, British General Howe, along with a note that read: "General Washington does himself the pleasure to return ...a dog, which accidentally fell into his hands."

Thomas Jefferson did not particularly share his fellow Virginian's attachment to dogs.  In 1789, returning from his assignment as ambassador to France, he imported "shepherd's dogs" for Monticello & later presented Washington with puppies. 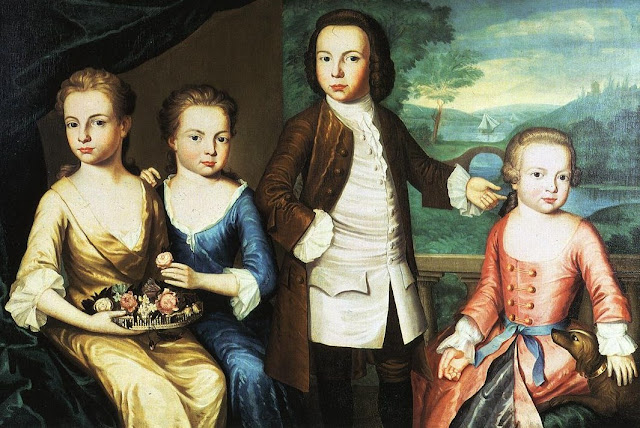 In Williamsburg and its environs, the Virginia Gazette often carried advertisements for lost dogs. In 1751, Alexander Finnie, who ran the Raleigh Tavern, offered to pay "Half a Pistole" to anyone who returned his "spaniel BITCH, with white and brown spots." In 1752 Williamsburg, a pet dog Ball, a reddish spaniel was lost, and his owner James Spiers was willing to part with a dollar to get him back. In 1774, Glasgow, a brown-and-white bulldog with an iron collar, had gone missing and his owner offered 20 shillings for his return. In the same paper in 1777, a pet black Pomeranian called Spado was stolen and a $20 reward was offered. 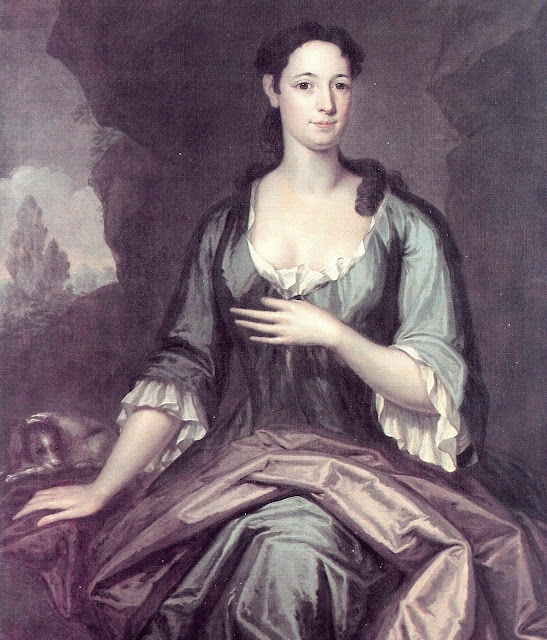 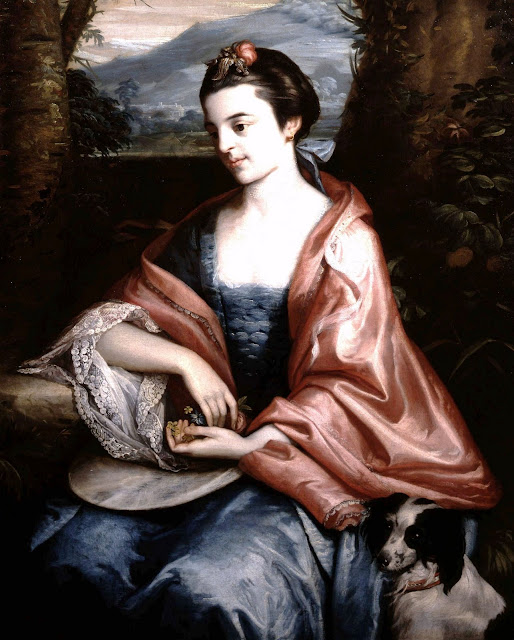 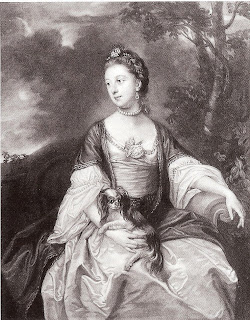 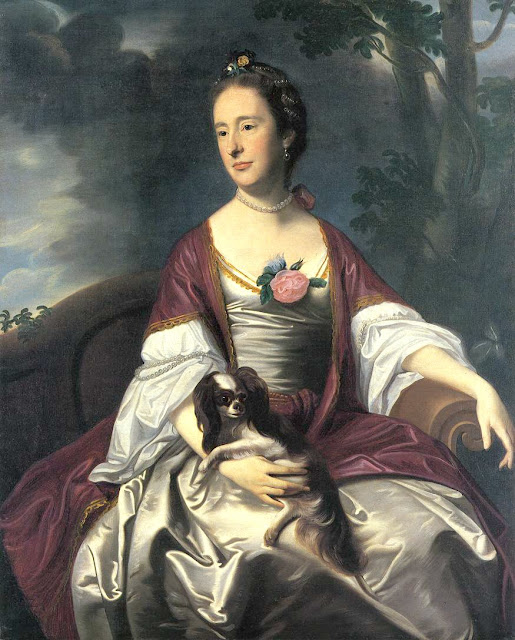 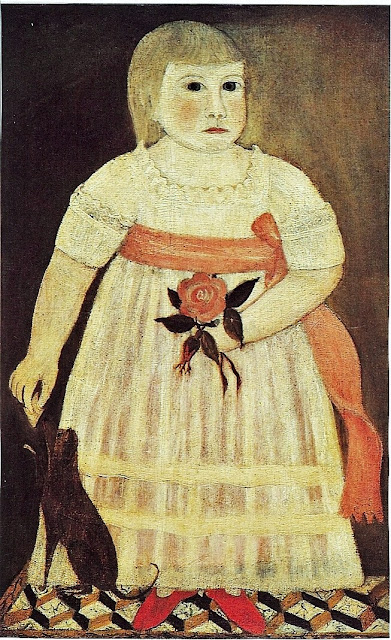 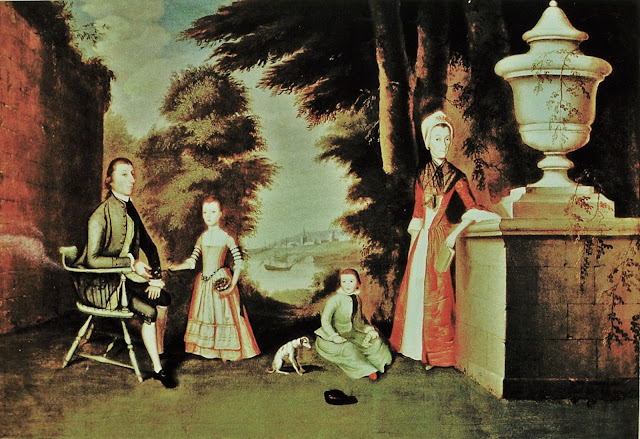 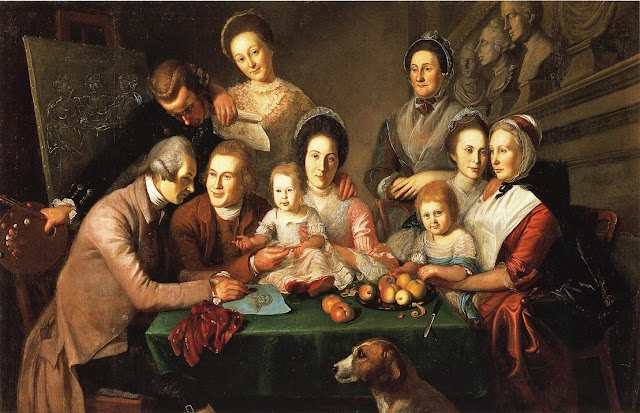 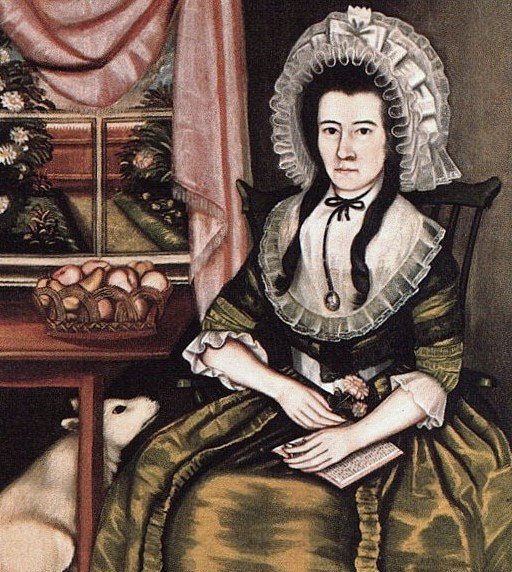 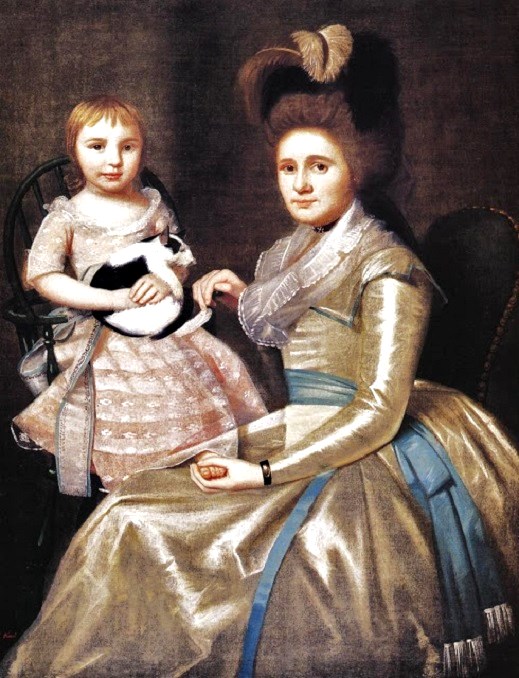 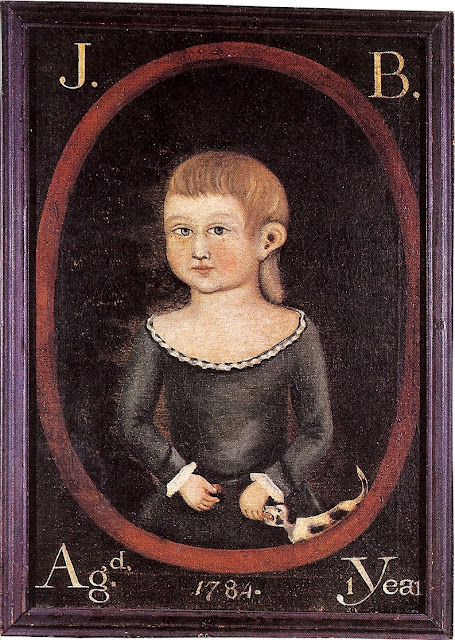 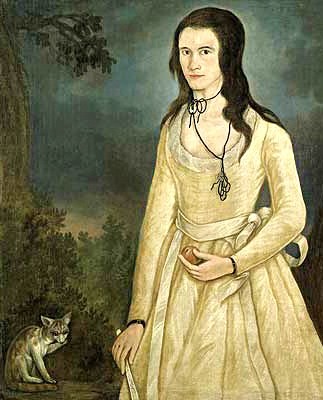 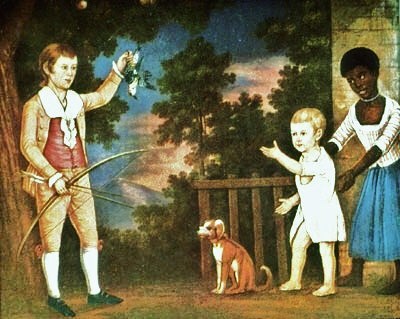 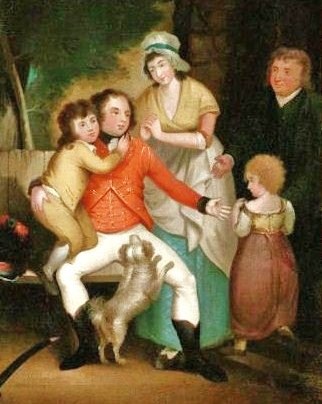 By the dawn of the 19th century, there could be no doubt that dogs were an integral part of the American family.
John Trumbull (American painter, 1756-1843) Sarah Trumbull with a Spaniel 1802
Posted by Barbara Wells Sarudy at 4:00 AM