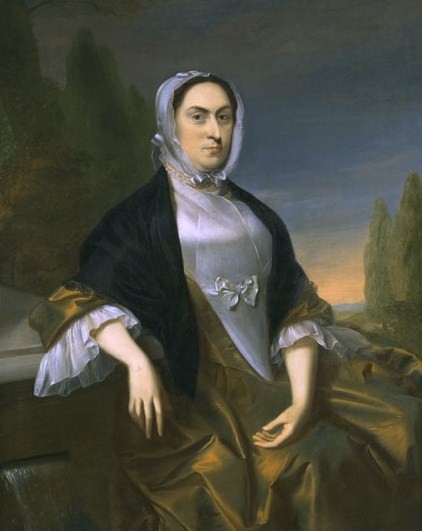 The Worchester Art Museum tells us that Sarah Tyler was born in Boston on March 21, 1717/18 and baptized nine days later at the Brattle Square (Congregational) Church. She was the daughter of William Tyler (1688–1758), a prosperous merchant, and Elizabeth Royall Tyler. Sarah later became a member of the Brattle Square Church and on November 11, 1742 she married Samuel Phillips Savage (1718–1797) there. The Savages had ten children, seven of whom lived to maturity.

Little personal record of Sarah Savage survives except for two letters that Samuel wrote to her during trips away from Boston. In one undated letter, Samuel advises her to get a receipt if she decides to buy a slave named Cloe. The other letter, written in July, 1747, is addressed informally to "Sally" and expresses Samuel’s wish to return home before planned. He explains that he will, however, keep his original schedule lest Sarah "discover the Fickleness of my Temper, and my over Fondness of Seeing you." Savage concludes, "Pray always for me that in all the Changes of Life I may be by Gods Grace enabled to Surmount all Difficulties & Temptations, and at last be victorious in Christ my Lord—." According to a manuscript genealogy in one of Samuel Savage’s diaries, "Sarah. . . died in Childbed a few hours after delivery with a Dead female child.—at 2 oClock on a Sabbath Day" in February of 1764. Shortly after Sarah’s death Samuel purchased sixteen mourning rings from Boston silversmith William Simpkins (1704–1780) for distribution to friends and family members. The year after Sarah’s death Samuel Savage moved to a seventy-five acre farm and grist mill in Weston, Massachusetts, where he experimented with crops and recorded meteorological and astronomical observations. Samuel married two more times: in 1767 to Bathsheba Thwing Johnston (1725–1792) and in 1794 to Mary Meserve (d. 1810). Johnston was the widow of Thomas Johnston, the craftsman who probably made the frames for Copley’s portraits of Mr. and Mrs. Savage.

Samuel Savage was a merchant and an entrepreneur in the shipping insurance business. He was the oldest child of Arthur Savage (1680–1735)—a wealthy sea captain, merchant, and public official whose estate was valued at more than 5,000 pounds—and Faith Phillips Savage (1690–1775). In 1741 Samuel began a short-lived business partnership with David Jeffries. After working independently for about a decade, Savage accepted his younger brother Arthur as his partner. The Savage brothers sold Bohea tea, coffee, chocolate, raisins, rice, indigo, sugar, molasses, rum, brandy, raisins, snuff, beef, cheese, flour, salt-fish, pepper, and ginger. Beginning in 1756 Samuel also sold insurance to fellow merchants who wanted to protect their precarious investments at sea. The partnership of Samuel and Arthur Savage dissolved in 1764, because the older brother proved to be an ardent patriot and the younger one a Loyalist.

Samuel held a number of public offices in Boston. He served as a constable in 1742, a clerk of the market in 1749 and 1750, and a selectman in 1760 and 1761.14 Savage is believed to have participated in 1765 in the Liberty Tree protest in which Andrew Oliver—the Secretary of the province whose job it was to distribute stamps under the Stamp Act—was hung in effigy. On December 15, 1773 Savage moderated the meeting during which the Boston Tea Party was planned. In 1774 he was chosen to be Weston’s representative in the Provincial Congress. In 1776 he was appointed to a nine-member Board of War and served as its president until the board was dissolved in 1781. Savage was also a judge of the Inferior Court of Middlesex County (1775–1782) and of the Court of Common Pleas (1782–1797).
Posted by Barbara Wells Sarudy at 4:00 AM