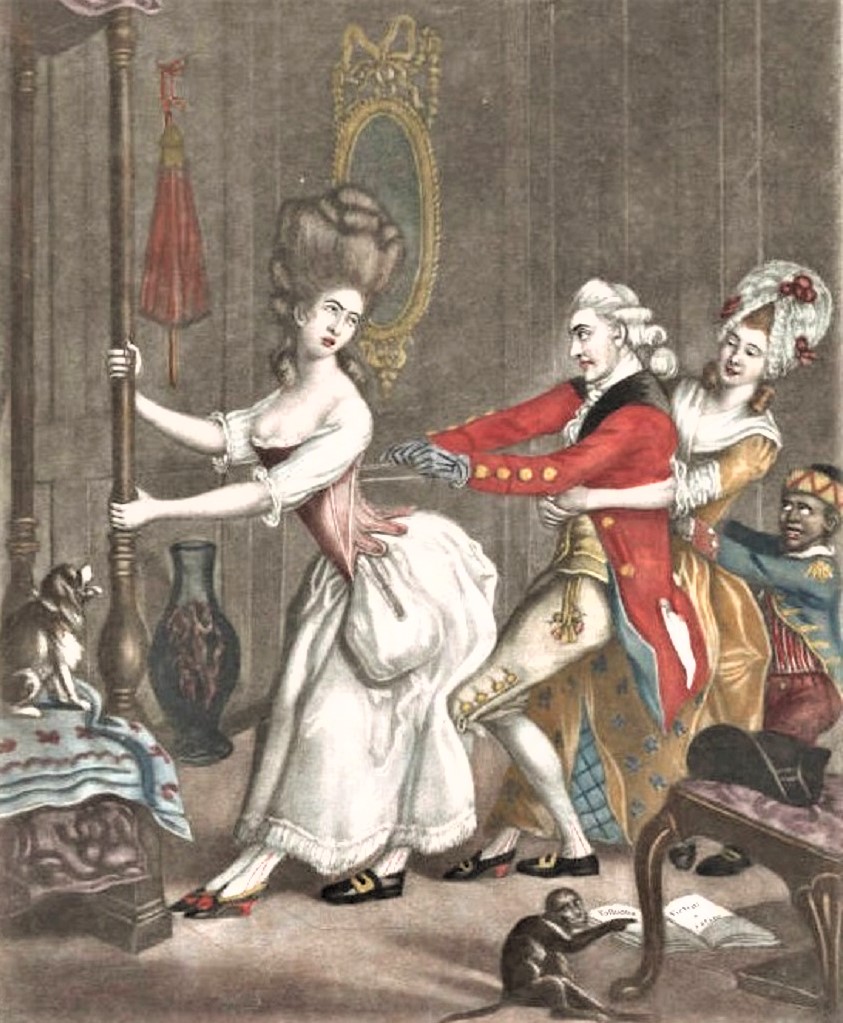 Just as British American colonials were recognizing that they were developing into a far different society than the hereditary and aristocratic world of the mother country, they were in the midst of a full-blown consumer revolution. It was just that consumer revolution which was giving unaccustomed power and wealth to the merchant class.

Affluent merchant families were building grand houses and filling them with imported goods. Textiles, furniture, and table wares flowed into the ports for merchants to sell, and local artisans began to flourish as well. Colonists, without the traditional genetic credentials, were displaying these new acquisitions to project an appearance of refinement and gentility akin to that of the landed gentry in England. Women became more aware of the latest taste in fashion and enhanced their appearance with wigs, cosmetics, hair ornaments, and hats.

As some in the middle of the 18th century worried about the loss of beauty and the enduring role of women as they grew older, others fretted about the ostentatious displays of fashion and cosmetic beauty. Visible distances between the classes were increasing. Values of economy and extravagance would be at war, until the real Revolutionary war would see American country-made economy would become a virtue, even if it was just a temporary trend.

As usual, 18th century pundits used sarcasm and irony to highlight the problem. One poem appearing in the 1756 March editions of both Boston and New York newspapers spoke to the complicit role of the portrait painter in ostentatious display.

THE PETITION
Artful Painter by this Plan
Draw a Female if you can.
Paint her Features bold and gay,
Casting Modesty away;
Let her Art the Mode express,
And fantastick be her Dress.
Cock her up a little Hat
Of various Colours, this and that;
Make her Cap the Fashion new,
An Inch of Gauze or Lace will do.
Cut her Hair the shortest Dock;
Nicely braid the Forehead Lock;
Put her on a Negligee,
A short Sack, or Shepherdee
Ruffled up to keep her warm,
Eight or Ten upon an Arm.
Let her Hoop extending wide
Show her Garters and her Pride.
Her Stockings must be pure and white
For they are seldom out of Sight.
Let her have a high heel'd Shoe,
And a glittering Buckle too.
Other Trifles that you find,
Make quite Careless as her Mind.
Thus equipped, she's charming Ware
For the Races or the Fair.
London's monthly Universal Magazine of Knowledge and Pleasure ridiculed the constant changes in female fashion,

Now dress'd in a cap,
now naked in none;
Now loose in a mob,
now close in a Joan;
Without handkerchief now,
and now buried in ruff;
Now plain as a Quaker,
now all in a puff;
Now a shape in neat stays,
now a slattern in jumps
Now high in French heels,
now low in your pumps;
Now monstrous in hoops,
now trapish, and walking
With your petticoats
clung to your heels like a maulkin;
Like the cock on the tower,
that shows you the weather,
You are hardly the same for two days together.
In 1754, a New York newspaper published the satirical view of the extravagance of women's fashion from a poem published in 1753 in London.

A RECEIPT FOR MODERN DRESS
Hang a small bugle cap on as big as a crown,
Snout it off with a flower, vulgo dict. a pompoon;
Let your powder be grey, and braid up your hair
Like the mane of a colt, to be sold at a fair.
A short pair of jumps half an ell from your chin,
To make you appear like one just lying in;
Before, for your breast, put a stomacher bib on
Ragout it with cutlets of silver and ribbon.
Your neck and your shoulders both naked should be,
Was it not for Vandyke blown with Chevaux de Frize.
Let your gown be a sack, blue, yellow, or green,
And frizzle your elbows with ruffles sixteen;
Furl off your lawn aprons with flounces in rows,
Puff and pucker up knots on your arms and your toes;
Make your petticoats short, that a hoop eight yards wide
May decently show how your garters are tied.
With fringes of knotting, your dicky cabob
On slippers of velvet set gold a-la-daube.
But mount on French heels when you go to a ball,
'Tis the fashion to totter and shew you can fall;
Throw modesty out from your manners and face,
A-la-mode de Frangois you're a bit for his Grace.
In 1756, a New York newspaper offered this satirical fashion advice,

The dress of the year 55 that was worn
Is laid in the grave and new fashions are born:
Then hear what your good correspondents advance,
'Tis the Pink of the Mode and dated from France:
Let your cap be a butterfly slightly hung on
Like the shell of a lapwing just hatch'd on her crown
Behind, with a coach horse short dock, cut your hair
Stick a flower before Screw-whiff 'with an air,
A Vandicke in frize your neck must surround,
Turn your lawns into gauze, let your Brussels be blond;
Let your stomacher reach from shoulder to shoulder,
And your breast will appear much fairer and bolder.
Wear a gown or a sack as fancies prevail,
Hut with flounces and furbelows ruffle your tail.
Let your hoop show your stockings & legs to your knees,
And leave men as little as may be to guess.
For other small ornaments, do as before,
Wear ribbons a hundred and ruffles a score;
Let your tail, like your dress, be fantastic and odd,
And then you'll show a way in taste A-la-mode.

A sarcastic and anonymous "Sally Tippet" wrote a letter to a New York newspaper in 1761.
"Ladies...Nothing however looks more surfeiting to me than your home-bred fashions and complements; there is something so rustic, so Bridget-Norton-like in them, which is visible in most of our city ladies, that I believe the one-half have neither milliners, dolls, dressing-maids, dancing-masters, nor indeed pier-glasses."
Posted by Barbara Wells Sarudy at 4:00 AM