A rather amazing history of the trade of barber appeared in Benjamin Franklin's The Pennsylvania Gazette on June 23, 1743.  It purportedly was sent to Franklin by Alexander Miller, Peruke-maker, in Second Street, Philadelphia.  It reviews the role of the barber shop as a place to exchange for gossip & news and then pounces on politicians & the church & finally women. 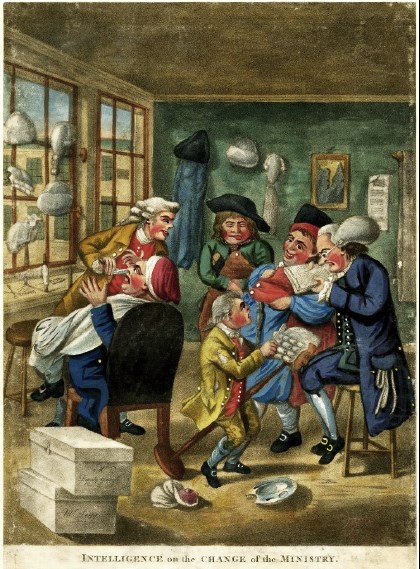 ALEXANDER MILLER, Peruke-maker, in second-street, Philadelphia, takes Opportunity to acquaint his Customers, that he intends to leave off the Shaving Business after the 22d of August next.

To Mr. FRANKLIN. SIR, IT is a common Observation among the People of Great Britain and Ireland, that the Barbers are reverenced by the lower Classes of the Inhabitants of those Kingdoms, and in the more remote Parts of those Dominions, as the sole Oracles of Wisdom and Politicks. This at first View seems to be owing to the odd Bent of Mind and peculiar Humour of the People of those Nations: But if we carry this Observation into other Parts, we shall find the same Passion equally prevalent throughout the whole civilized World; and discover in every little Market Town and Village the 'Squire, the Exciseman, and even the Parson himself, listening with as much Attention to a Barber' s News, as they would to the profound Revelations of a Chancellor of the Exchequer, or principal Secretary of State.

A Country Barbers Shop by C Goodnight, pub by John Smith of Cheapside 1789

Antiquity likewise will furnish us with many Confirmations of the Truth of what I have here asserted. Among the old Romans the Barbers were understood to be exactly of the same Complection I have here described. I shall not trouble your Readers with a Multitude of Examples taken from Antiquity, I shall only quote one Passage in Horace, which may serve to illustrate the Whole, and is as follows: Strennuus et fortis, causisql Philippus agendis Clarus, ab officiis ectavam circiter loram Dum redit: atq; foro nimium distare carinas Jam grandis natu queritur, conspexit, ut aiunt, Adrasum quendam vacua tonsoris in umbia Cultello proprios purgantem leniter ungues. HOR. Epist. Lib. 1. 7. By which we may understand, that the Tonsoris Umbra, or Barber' s Shop, was the common Rendezvous of every idle Fellow, who had no more to do than to pair his nails, talk Politicks, and see, and to be seen. 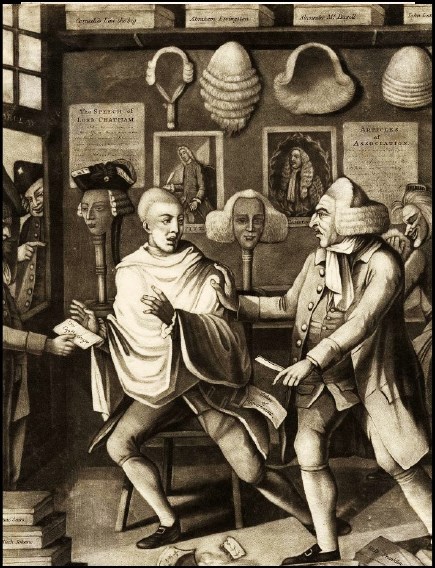 A potentially dangerous trip to the barber just before the Revolution - "Patriotic Barber of New York or the Captain in the Suds." Sayer and Bennett 1775

But to return to the Point in Question. If we would known why the Barbers are so eminent for their Skill in Politicks, it will be necessary to lay aside the Appellation of Barber , and confine ourselves to that of Shaver and Trimmer, which will naturally lead us to consider the near Relation which subsists between Shaving, Trimming and Politicks, from whence we shall discover that Shaving and Trimming is not the Province of the Mechanick alone, but that there are their several Shavers and Trimmers at Court, the Bar, in Church and State. And first, Shaving or Trimming, in a strict mechanical Sense of the Word, signified a cutting, sheering, lopping off, and fleecing us of those Excrescencies of Hair, Nails, Flesh, &c. which burthen and disguise our natural Endowments. And is not the same practised over the whole World, by Men of every Rank and Station? Does not the corrupt Minister lop off our Priviledges, and fleece us of our Money? Do not the Gentlemen of the long Robe find Means to cut off those Excrescencies of the Nation, Highwaymen, Thieves and Robbers? 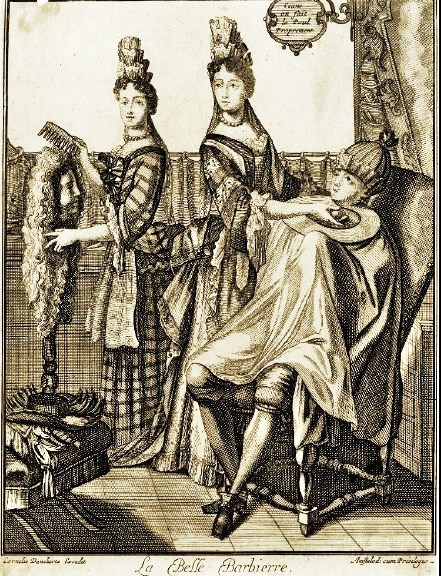 And to look into the Church, who has been more notorious for shaving and fleecing, than that Apostle of Apostles, that Preaches of Preachers, the Rev. G.W.? But I forbear making farther mention of this spiritual Shaver and Trimmer, lest I should affect the Minds of my Readers as deeply as his Preaching has affected their Pockets. The second Species of Shavers and Trimmers are those who, according to the English Phrase, make the best of a bad Market: Such as cover (what is called by an eminent Preacher) their poor Dust in tinsel Cloaths and gaudy Plumes of Feathers. A Star and Garter, for Instance, adds Grace, Dignity and Lustre to a gross corpulent Body; and a competent Share of religious Horror thrown into the Countenance, with proper Distortions of the Face, and the Addition of a lank Head of Hair, or a long Wig and Band, commands a most profound Respect to Insolence and Ignorance. The Pageantry of the Church of Rome is too well known for me to instance: It will not however be amiss to observe, that his Holiness the Pope, when he has a mind to fleece his Flock of a good round Sum, sets off the Matter with Briefs, Pardons, Indulgencies, &c. &c. &c. The Third and last Kind of Shavers and Trimmers are those who (in Scripture Language) are carried away with every Wind of Doctrine. The Vicars of Bray, and those who charge their Principles with the Times, may justly be referred to this Class. 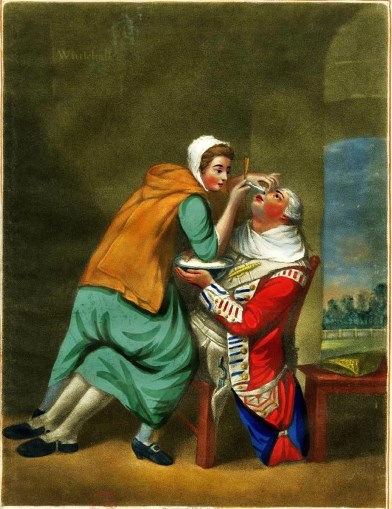 But the most odious Shavers and Trimmers of this Kind, are a certain Set of Females, called (by the polite World) JILTS. I cannot give my Readers a more perfect Idea of these than by quoting the following Lines of the Poet. Fatally fair they are, and in their Smiles The Graces, little Lives, and young Desires inhabit: But they are false luxurious in their Appetites, And all the Heav'n they hope form is Variety. One Lover to another still succeeds, Another and another after that, And the last Fool is welcome as the former; 'Till having lov'd his Hour out, he gives his Place, And mingles with the Herd that went before him. - ROWE'S Fair Penitent. (The Fair Penitent is Nicholas Rowe's stage adaptation of the tragedy The Fatal Dowry, the Philip Massinger and Nathan Field collaboration first published in 1632.)

Lastly, I cannot but congratulate my Neighbours on the little Favour which is shown to Shavers and Trimmers by the People of this Province. The Business is at so low an Ebb, that the worthy Gentleman, whose Advertisement I have chosen for the Motto of my Paper, acquaints us he will leave it off after the 22d of August next. I am of Opinion that all possible Encouragement ought to be given to Examples of this Kind, since it is owing to this that so perfect an Understanding is cultivated among ourselves, and the Chain of Friendship is brightened and perpetuated with our good Allies the Indians. The Antipathy which these sage Naturalists bear to Shaving and Trimming, is well known. I am, Yours, &c. 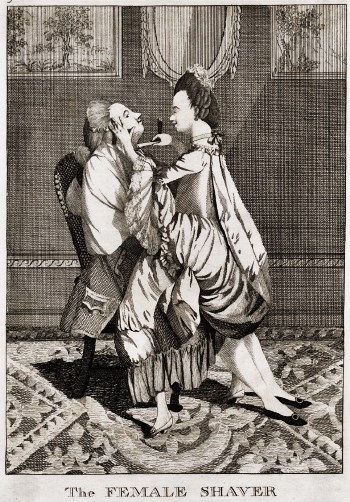 In the next issue of the Pennsylvania Gazette on June 30th, the following appeared, My paper on Shavers and Trimmers, in the last Gazette, being generally condemn'd, I at first imputed it to the Want of Taste and Relish for Pieces of that Force and Beauty, which none but University-bred Gentlemen can produce: But upon Advice of Friends, whose Judgement I could depend on, I examined myself and to my Shame must confess that I found myself to be an uncircumcised Jew, whose Excrescencies of Hair, Nails, Flesh, &amp:c did burthen and disguise my Natural Endowments; but having my Hair and Nails lopp'd off and shorn, and my fleshly Excrescencies circumcised, I now appear in my wonted Lustre, and expect a speedy Admission among the Levites, which I have already the Honour of among the Poets and Natural Philosophers.  I have one more Thing to add, which is, That I had no real Animosity against the Person whose Advertisement I made the Motto of my Paper; but (as may appear to all who have been Big with Pieces of this Kind) what I had long on my Mind, I at last unburden'd myself of.  O! these JILTS still run in my Mind.