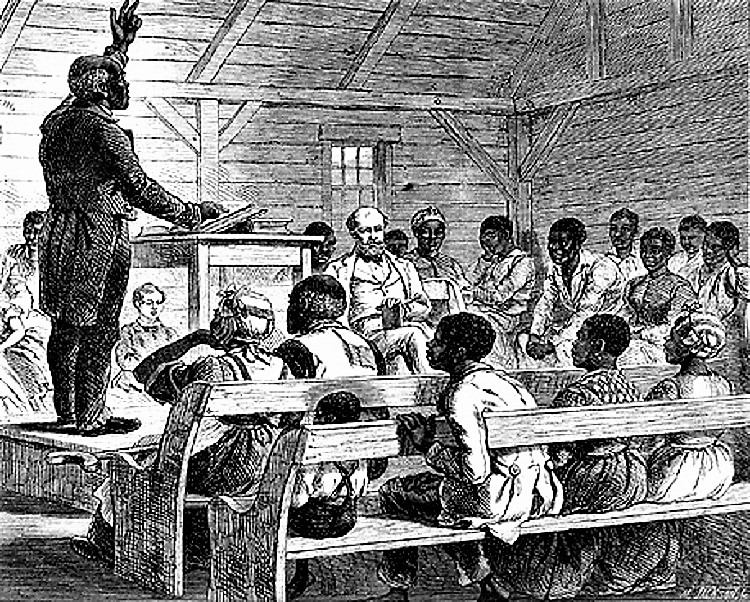 In Church. The Illustrated London News

From the 17C on there was a growing free black population in Maryland. This population grew quickly in the antebellum years. African Americans were usually emancipated for diligent work, good conduct, familial connections, or commendable service. At other times white owners experienced a change of heart, an attack of conscience, or, in the case of Quaker meetings, freed their slaves in following their religion.

The methods for manumission in Maryland included court actions, instructions in owners' wills, self-purchase, purchase of one's own family member's freedom with money earned when hired out, governmental decrees, or rewards for military service. In Maryland, according to acts of 1697 and 1692, the law declared that children followed the condition of their mother. Thus, when children were born to a free mother, they were free also.

In 1752, the population of Baltimore County included 166 mulatto slaves, 96 free mulattoes, 4,027 black slaves and eight free blacks. The census of 1790 recorded that about eight thousand free blacks lived in the state at that time. The free black population was concentrated in northern and western Maryland.

In 1830, the free black population was just under 53,000, about 12 percent of Maryland's population, according to the U.S. Census. That meant that about one-third of the entire Maryland African American population in Maryland was free.

Free blacks generally were not accorded the same privileges as white citizens. Maryland changed its laws relating to free blacks depending on the political climate. For a brief period some free blacks had the right to vote, but the law was later rescinded. Blacks could not carry firearms or testify against whites in court.

Free black men & women & especially children lived under the threat of being beaten or kidnapped by whites who would sell them into slavery. One reason whites formed the Maryland Abolition Society was to try to protect free blacks from kidnappers. Maryland passed and repealed several laws prohibiting blacks from assembling or carrying firearms. Maryland county governments often vacillated about the right of free blacks to hold and bequeath property. Whites often sought to restrict the type of work blacks could do because they did not want to compete with them. At various times the Maryland Assembly tried to pass laws prohibiting blacks from reading abolitionist literature, operating boats, obtaining licenses for pedaling, participating in certain trades, or having or driving hacks, carts or drays. There was also an effort keep free blacks from owning dogs. Slaveholders' motive for many of the laws, particularly those prohibiting free blacks from owning conveyances, was to prevent them from aiding runaway slaves.

In spite of numerous restrictions, free black men & women in Maryland formed their own churches, schools, benevolent societies, and businesses. By 1847 there were at least thirteen black churches in Baltimore alone. Many churches were a part of larger denominations which met periodically in various states to discuss both religious and political matters.

The 1850 Census indicates that over 50 percent of Maryland free black men & women could read and/or write. Free persons of color worked as domestics, small farmers, innkeepers, street vendors, ship caulkers, stevedores, sailors and boatmen, draymen, barbers, teamsters, blacksmiths, and liverymen. Blacks who had purchased their freedom were usually able to do so, because they had earned money with their skilled labor.

Some free blacks, like astronomer Benjamin Banneker and preacher Daniel Coker, were able to record their own experiences. Banneker published an almanac and aided in the survey of the Federal District, later to become the District of Columbia. Coker became one of the first emigrants to return to Africa with the American Colonization Society.
Posted by Barbara Wells Sarudy at 4:00 AM