Marrying in 1750 Pennsylvania & a glimpse at unmarried persons "merry-making"

Gottlieb Mittelberger traveled to Pennsylvania from Germany in 1750, on a ship primarily filled with poorer immigrants who would become indentured servants upon arriving in Philadelphia. Mittelberger was not a servant, and worked as a school master and organist for 3 years before returning to Germany in 1754.

If a man in Pennsylvania is betrothed to a woman, and does not care to be married by an ordained preacher, he may be married by any Justice, wherever he will, without having the banns published, on payment of 6 florins. It is a very common custom among the newly married, when the priest has blessed them, to kiss each other in presence of the whole church assemblage, or wherever the marriage ceremony takes place. Again, when a couple have been published from the pulpit, even if this has done for the second or third time, they are still at liberty to give each other up without the least cost. Even when such a couple have come to the church with their wedding guests, nay, when they already stand before the altar, and one party repents the engagement, he or she may yet walk away. This has frequently been done; but it occurs oftener that a bride leaves her bridegroom together with the wedding guests in the church, which causes a cruel laughter among said wedding guests; these may then freely partake of the meal that has been prepared.

If a couple in this province want to marry each other, and the parents and relatives on one or both sides will not permit it, especially when a woman will not renounce her lover, they ride off and away together on one horse. And because women have greater privileges than men, the man must sit on the horse behind his beloved. In this position they ride to a justice, and say they had stolen each other, and request him to marry them for their money. When this is done, no one, neither parents nor friends, can afterward separate them. . . .

If any one has lost a wife or husband in Germany, and if such loss was not caused by the death of either of them, he or she can find such lost treasure, if the same be still alive, in America, for Pennsylvania is the gathering place of all runaways and good-for- nothings. Many women and men are there who have deserted their spouses and their children, and have married again, but in doing so have generally made a worse bargain than before. . . . 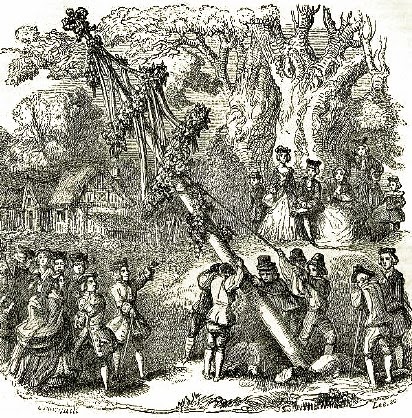 On the first and second days of the month of May there is general merry-making in Pennsylvania, in which the unmarried persons of both sexes chiefly take part. All amuse themselves with playing, dancing, shooting, hunting, and the like. Such unmarried persons as are born in the country adorn their heads with a piece of the fur of some wild animal, together with any painted animal they may choose. With these the young men walk about the city, crying, " Hurrah! Hurrah!" But no one may put such a token in his hat except those born in the country, and these are called Indians.