Mercy Otis Warren (1728-1814), poet, patriot, & chronicler of the Revolution, was born in Barnstable, Massachusetts, the 1st daughter & 3rd of the 13 children of James & Mary (Allyne) Otis. Her mother was a great-granddaughter of Edward Dotey, who had come to the colonies as a servant on board the Mayflower. A great-great-grandfather, John Otis, had settled in Hingham, Mass., early in the 17th century. By the 18th century, the Otis family had become established in Barnstable, on Cape Cod. 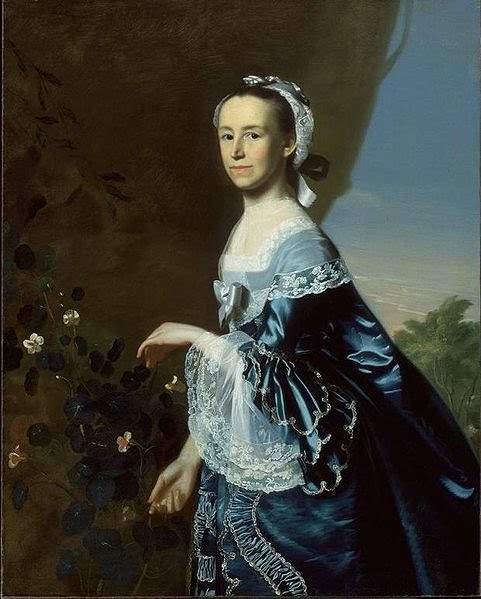 Mercy’s father prospered as a farmer, merchant, & lawyer & served as judge of the county court of common pleas & as colonel of the local militia. The Otises made sure that their sons were prepared for college, but the daughters were given no formal education. Mercy was allowed to sit in on her brothers’ lessons, while they were being tutored by their uncle, a local minister; & she had free access to her uncle’s library.

On Nov, 14, 1754, at 26, she married to James Warren of Plymouth, a merchant & farmer & a Harvard graduate. They had 5 sons, James (1757), Winslow (1759), Charles (1762), Henry (1764), & George (1766). As the American colonies came into increasing conflict with England, her relatives’ activities drew Mercy Warren close to public affairs. Her father was a justice of the peace. Her husband was a member of the Massachusetts legislature. Her brother James initially served as a king’s advocate & then, after resigning his royal appointment, he became a leading spokesman against writs of assistance. Mrs. Warren found that her home in Plymouth, had become a meeting place of leading opponents of royal policy within Massachusetts, including, John & Samuel Adams. Her own contribution was to write in support of the revolutionary cause. She had composed poems as early as 1759, & she now turned to political satire. 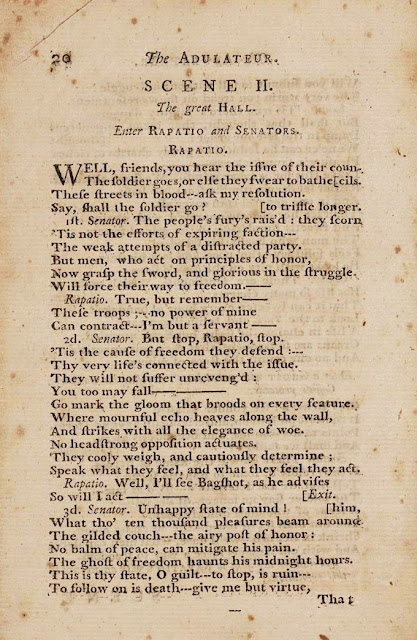 Warren couched her satiric thrusts in dramatic form, written to be read, not performed. Her first play, The Adulateur, appeared anonymously in 2 installments in the Boston newspaper the Massachusetts Spy during 1772; &, with additions apparently written by someone else, was reprinted separately the following year. In it Thomas Hutchinson, royal governor of Massachusetts, was depicted in the guise of Rapatio, the ruler of the mythical country of Servia, who hoped to crush “the ardent love of liberty in Servia’s free-born sons.”

Soon afterward, she wrote The Defeat, again with “Rapatio” as villain. In her next play, The Group, published in Boston in 1755, Massachusetts Tories, as evil as ever, were disguised under such names as Judge Meagre, Brigadier Hateall, Sir Spendall, & Hum Humbug. The Blockheads (1776) & The Motley Assembly (1779) were probably also written by Warren, though the evidence of authorship is not definite. 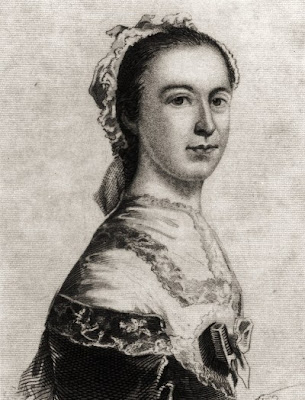 In 1790, she published Poems, Dramatic & Miscellaneous, a collection that included 2 verse dramas, The Sack of Rome & The Ladies of Castle-each a tract on behalf of human liberty, in which the characters are handled with more subtlety & warmth than in her political satires. On the whole, Warren’s plays possess no particularly remarkable literary merit, but they are testimony to the imagination of a woman who never traveled out of Massachusetts, & who probably never saw a play performed on the stage.

During & after the Revolution, the Warrens suffered something of a political & social decline, James Warren lost his seat in the legislature in 1780, & their sons failed to obtain political preferment despite Mrs. Warren’s active intercession with their old friend John Adams & other persons in power.

Late in that decade both James & Mercy Warren were accused by local political conservatives of having been sympathetic to Shays’ Rebellion, the uprising of western Massachusetts farmers, & even of having supported it. Nowhere in her surviving letters does Warren voice any support for the rebellion. Her son Henry served with the government troops sent to suppress it; & she later, in the final volume of her history of the American Revolution, sharply criticized the Shay’s insurgents.

The accusations against Mrs. Warren may have been an attempt to discredit her because of her spirited opposition to the ratification of the federal Constitution during the winter of 1787-88, in her Observations on the New Constitution (1788). Federalist Boston was still further antagonized by her defense of the French Revolution, in the preface which she wrote in 1791, for the American edition of her friend Mrs. Catharine Macaulay Graham’s attack upon Edmund Burke.

Her letters to John Adams often contained a little gossip of the day. In a letter to him, dated October, 1778, she mentions Benjamin Franklin: "Are you, sir, as much in the good graces of the Parisian ladies, as your venerable colleague, Dr. F-? We often hear he is not more an adept in politics than a favorite of the ladies. He has too many compliments of gratulation and esteem from each quarter of the globe, to make it of any consequence whether I offer my little tribute of respect or not. Yet I would tell him as a friend to mankind, as a daughter of America, and a lover of every exalted character, that no one more sincerely wishes the continuance of his health and usefulness; and so disinterested is my regard, that I do not wish him to leave the soft caresses of the court of France; for his unpolished countrywomen will be more apt to gaze at and admire the virtues of the philosopher, than to embrace the patriotic sage." 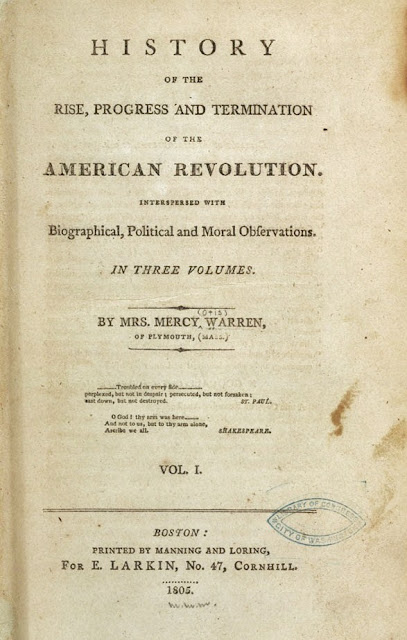 During these years after the Revolution, Warren continued the writing of her major literary work, the 3-volume History of the Rise, Progress & Termination of the American Revolution (1805), which she had begun in the late 1770’s. Although no less reliable than other histories from the same period, her work is now useful chiefly for its vigorous personal opinions of people & events she had known firsthand.

Publication of her history brought into the open the rupture in the friendship between herself & John Adams, which had begun with the divergence of their political views & her anger at his failure to assist the Warrens’ political fortunes. Her accusations in her History that Adams had “forgotten the principles of the American revolution” & that he was guilty of “pride of talents & much ambition” piqued the ex-president, & several heated letters were exchanged between them. Eventually, in 1812, Elbridge Gerry succeeded in effecting a reconciliation of sorts. Adams still somewhat regretted, however, that he & his wife, Abigail, had been among the first to encourage Mrs. Warren to write her account. “History,” he complained to Gerry, “is not the Province of the Ladies.”

Warren would certainly have disagreed. She was something of a feminist by the standards of her time. Political or legal rights for women were not an important issue in her day, but she deplored the fact that women were not generally given formal education & felt that they could well participate in many activities customarily restricted to men. On one occasion, she advised a friend that women should accept “the Appointed Subordination,” not because of any inherent inferiority, but “perhaps for the sake of Order in Families.”

Rochefoucault, in his Travels in the United States, speaks of Mrs. Warren's extensive & varied reading. She was then 70; and he says, " truly interesting; for, lively in conversation, she has lost neither the activity of her mind, nor the graces of her person."

For many years before her death, Mrs. Warren was afflicted with the failure of her sight; but she submitted to the trial with pious resignation, continuing to receive with cheerfulness the company that frequented her house, and to correspond with her friends by means of a secretary. A passage from a letter to one of her sons, written in 1799, amidst the convulsions in Europe, shows that she still occasionally indulged in the elaborate style so much in vogue: "The ices of the Poles seem to be dissolved to swell the tide of popularity on which swim the idols of the day; but when they have had their day, the tide will retire to its level, and perhaps leave the floating lumber on the strand with other perishable articles, not thought worth the hazard of attempting their recovery." 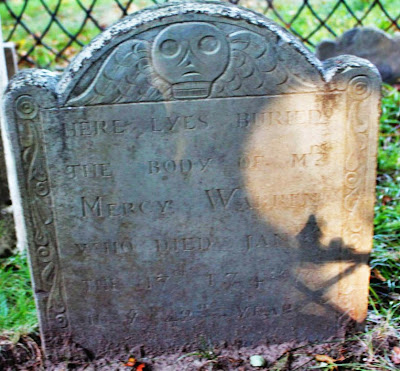 In relatively good health to the end of her long life. Mrs. Warren continued to correspond with her political & literary friends, & visitors reported that the fashionable woman’s conversation was still vigorous, her mind active. A lady who visited Mrs. Warren in 1807, described her as erect in person, & in conversation, full of intelligence and eloquence. Her dress was a steel-colored silk gown, with short sleeves and very long waist; the black silk skirt being covered in front with a white lawn apron. She wore a lawn mob-cap, & gloves covering the arm to the elbows, cut off at the fingers. Warren died in Plymouth, Mass., where she had spent most of her married life, at the age of 86, having survived her husband by 6 years. Her remains lie at Burial Hill, Plymouth. 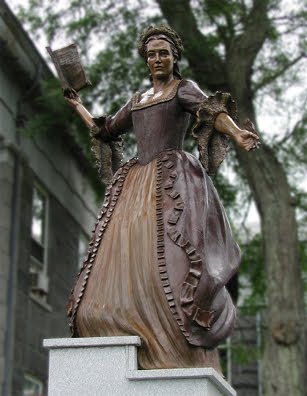