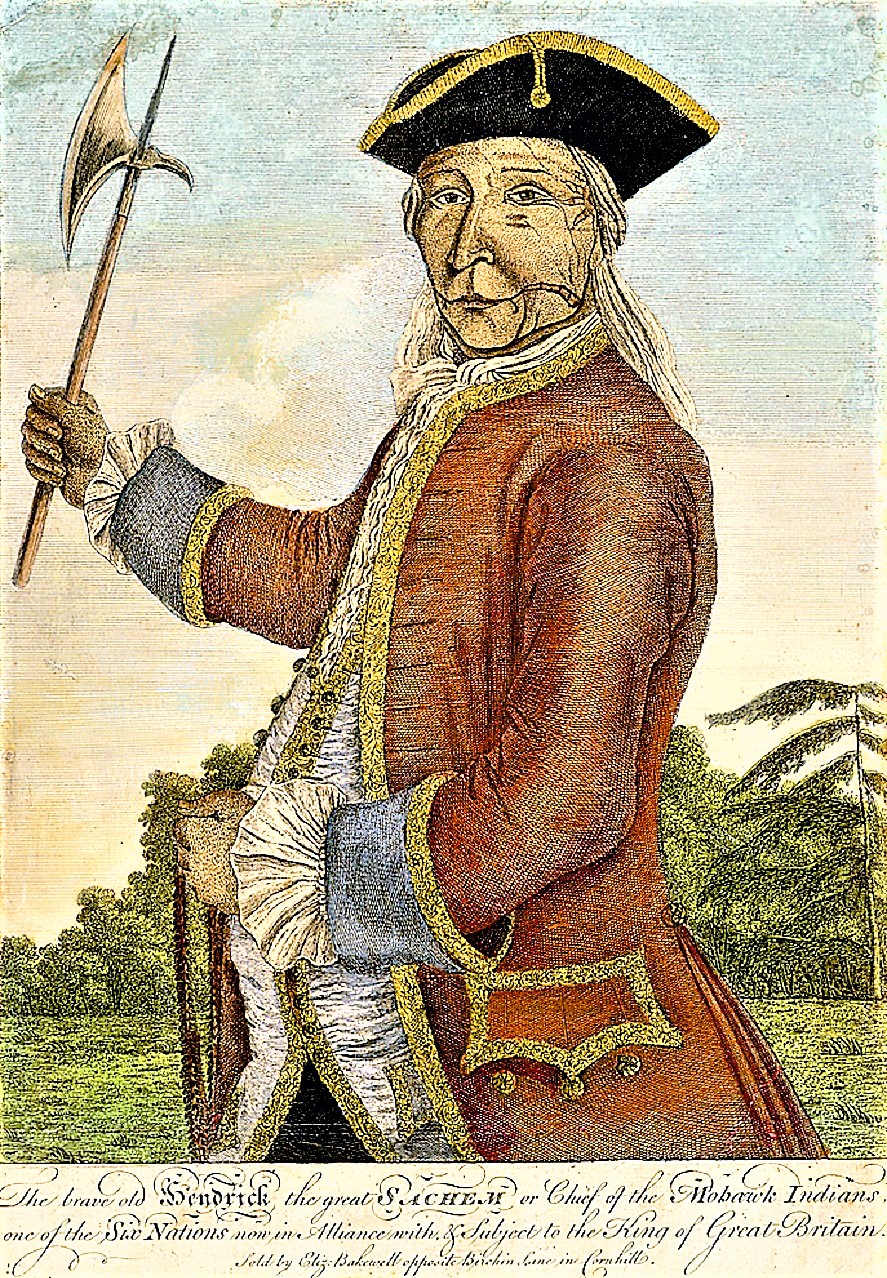 Hendrick Theyanoguin  Chief of the Mohawk Indians, published in London in 1755

The British American colonial government convened a conference in Albany, New York, in the summer of 1754. French troops had occupied the Ohio valley; while the Indians in New York had declared the Covenant chain alliance broken.

Hendrick, a Mohawk leader among the Iroquois Confederation, wanted to renew the alliance between the Iroquois & the colonists. But in his speech at the meeting, he called the British weak. Soon the Seven Year's War would involve the French, the British colonists, & the Native Americans in a war that would also be called The French & Indian War.

Mohawk Hendrick:
Then Hendrick, brother to the said Abraham, and a Sachem of the same castle, rose up and spake in behalf of the Six Nations as follows:
"Brethren, This is the ancient place of treaty where the fire of friendship always used to burn, and it is now three years since we have been called to any public treaty here; ‘tis true, there are commissioners here, but they have never invited us to smoke with them (by which they mean, the commissioners had never invited them to any conference), but the Indians of Canada came frequently and smoked with them, which is for the sake of their beaver, but we hate them (meaning the French Indians)

We have not as yet confirmed the peace with them: ’tis your fault, brethren, we are not strengthened by conquest, for we should have gone and taken Crown Point, but you hindered us: We had concluded to go and take it; but we were told it was too late, and that the ice would not bear us. Instead of this you burnt your own fort at Saraghtogee and run away from it; which was shame and a scandal to you. Look about your country, and see you have no fortifications about you, no not even to this city. 'Tis but one step from Canada hither, and the French may easily come and turn you out of doors.

"Brethren, You desired us to speak from the bottom of our hearts, and we shall do it. Look about you, and see all these houses full of beaver, and money is all gone to Canada; likewise your powder, lead, and guns, which the French make use of at the Ohio.

“Brethren, You were desirous we should open our minds and our hearts to you; look at the French, they are men; they are fortifying every where; but we are ashamed to say it; you are like women, bare and open, without any fortifications.”