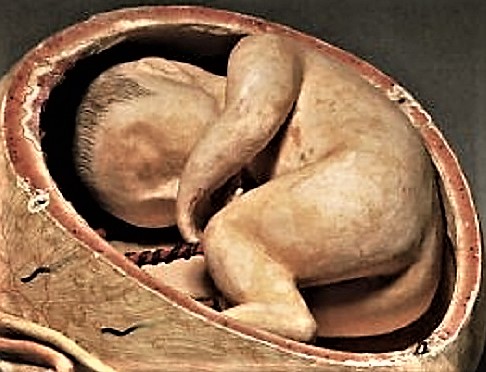 Rebekah Chamblit (ca.1706-1733) lived in Boston, Massachusetts. She was tried and executed in 1733 for infanticide. Her "declaration," reportedly "read at the place of execution," September 26th, 1733, may not have been in fact written by Chamblit herself; scholars suggest the text represents a forced or fictional confession in an extremely patriarchal society.

Chamblit was 27 years old and unmarried. According to society norms, she should have remained celibate. Her declaration was a broadside prepared by ministers to be as widely distributed as possible. It was the middle of the Great Awakening, when women were gaining some religious recognition & power, as traditional Puritan ministers were losing some of their power. Reportedly the ministers posed questions to Chamblit, as she walked to the gallows & stood on a ladder waiting to be hung. She answered as long as she could, saying what they wanted to hear. Then she "grew disordered and faint, and not capable of attending further to continu'd discourse."

Infanticide was certainly not a new phenomenon. From 1728 to 1800, the Pennsylvania Gazette published approximately one hundred accounts of infanticide. The Gazette did not identify women accused of infanticide as single or unmarried, but usually it identified their deceased infants as “bastards.” In fact, 60% of accounts describe the deceased infant as a “bastard.” For centuries, unwed mothers in Europe had occasionally killed their offspring, because they were unable to face the ignominy of raising an illegitimate child. As legal & cultural responses to crime changed by the 18C, unwed and impoverished mothers might abandon the baby on some local doorstep hoping that the newborn would receive a more healthy upbringing with a different family.  Infanticide narratives written in New England colonies & states are particularly revealing. In most infanticide narratives, the murder of the child is not mentioned. The woman is charged with having led an "unclean" life which warrants her execution.

Though there is documentation that women from different socio-economic statuses committed infanticide, women convicted of infanticide were commonly young, unmarried, lower class women who had labor-intensive jobs. These women often did not have the patriarchal protection of their father because they were servants and lived outside of their family home. If a servant woman became pregnant, not only did she work a labor intensive job that did not allow for her to properly care for an infant, but she often also faced additional years of servitude as punishment for having a child outside of wedlock.

Female deviations from the norm, even after the witch hunts had subsided, sometimes were met with extreme consequences, especially when the traditional power of the dominant males was being threatened. The details contained in Chamblit's purported declaration seem calculated to fit within the Massachusetts Bastard Neonaticde Act exactly as written, thereby completely justifying her hanging.

The declaration, dying warning and advice of Rebekah Chamblit. A young woman aged near twenty-seven years, executed at Boston September 27th. 1733. According to the sentence pass'd upon her at the Superior Court holden there for the county of Suffolk, in August last, being then found guilty of felony, in concealing the birth of her spurious male infant, of which she was delivered when alone the eighth day of May last, and was afterwards found dead, as will more fully appear by the following declaration, which was carefully taken from her own mouth. Boston: Printed and sold by S. Kneeland and T. Green, in Queen-Street, 1733.

"On Saturday The Fifth day of May last, being then something more than Eight Months gone with Child, as I was about my Household Business reaching some Sand from out of a large Cask, I received considerable Hurt, which put me into great Pain, and so I continued till the Tuesday following; in all which time I am not sensible I felt any Life or Motion in the Child within me; when on the Said Tuesday the Eighth of may, I was Deliver'd when alone of a Male infant; in whom I did not perceive Life; but still uncertain of Life in it, I threw it into the Vault about two or three Minutes after it was born; uncertain I as, whether it was a living or dead child; Tho' I confess it was probable there was Life in it, and some Circumstances seem to confirm it. I therefore own the Justice of GOD and Man in my Condemnation, and take Shame to my self, as I have none but my self to Blame; and am Sorry for any rash Expressions I have at any time uttered since my Condemnation; and I am verily persuaded there is no Place in the World, where there is a More strict regard to Justice than in this Province."