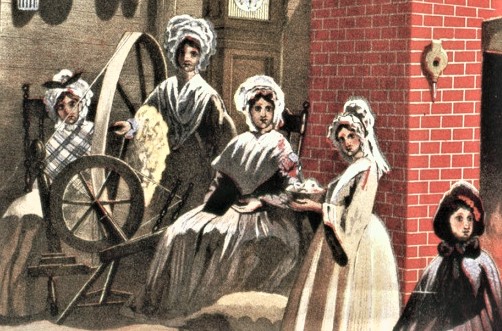 During the British American colonial period, colonists did import most of their manufactured goods. Laws prohibiting manufacturing & limiting imports & exports were established starting in the mid 1600s. These Navigation Acts confined colonial trade to England. Imports were to come only through a British port, on a British ship, with at least a 2/3rds British crew in order to prevent the colonies from trading with other countries. One piece of legislature stated that “Americans had no right to manufacture even a nail or a horseshoe,” which prompted a colonial wag to remark that soon they would be sending their horses to England to be shod.

In 1698, some Americans manufactured & exported wool to France in exchange for silk textiles. The hint of growth of a woolen industry in the colonies was regarded with jealous eyes since wool was the economic backbone of England. The Crown, aided by the governors of the colonies, sought to maintain England's monopoly by regulating wool production in America through the Wool Act of 1699 & subsequent further restrictions.

A 1705 edict of Lord Canbury, governor of New York, written in a letter to the British Board of Trade, stated: No wool, woolfells, shortlings, morlings, wool flocks, worsted, Bay or Woolen yarn, cloth serge, Bays, Kerseys, Says, Frizes, Druggests, Cloath Serges, Shallons or any other Drapery, stuffs or woolen manufactures whatsoever, made or mixed with wool or wool flocks, being the product or manufacture of any English plantation in America shall be laden on any ship or vessel.

British laws specifically stated that wool products could not legally be transported across any body of water including the smallest creek & trade between colonies was restricted. Improved breeds of sheep or any wool producing equipment were not to be imported. If someone was caught & found guilty by a jury of his peers the result was forfeiture & a 500 pound fine.

Cloth manufacturing acquired political meaning, when the 1760s Stamp Act resulted in a self-imposed boycott of British goods by the colonists.

Colonial cloth production was stepped up, but there was a shortage of raw materials, skill, & labor. American homespun relied on both flax & hemp. In the British American colonies gardens & farms grew both flax & hemp. Hemp, another bast fiber like flax, was used when more durability was required such as for rope & Conestoga wagon covers, & as well as for a linen-like fabric. It was a taller plant & had a longer fiber. In color, it was more reddish yellow, but it was difficult to distinguish from linen in its final form.

There were some attempts to grow silk in the colonies but most were unsuccessful. Both silk & cotton were imported & silk more so than cotton. Cotton was never a big player in the colonial homespun industries. Records show that it was grown as an ornamental. Indian cottons—they had cheap enough labor to pick the fiber off the seeds—were banned in Britain in attempts to protect the British textile industry but small amounts of cotton fabric made it to America. The situation with cotton changed dramatically in 1793, with the invention of the cotton gin.

For women, who could not vote or hold office, non-importation campaigns were a way to participate in colonial politics. Many of them publicly gave up drinking tea & began spinning their own yarn, to avoid buying cloth imported from Britain. Some spelling changes & edits have been made to improve clarity.

From Massachusetts to the Carolinas, the women of the colonies banded together in patriotic societies usually called the Daughters of Liberty, agreeing to wear only garments of homespun manufacture & to drink no tea. Spinning frolics, social gatherings where the women spun & held spinning competitions, were common in many towns.

On the 12 of July...true Daughters of Liberty & Industry, stimulated by their fair Sisters, met at the House of Rev. Mr. Forbes, to the number of Fifty-five, with Thirty four Wheels; & from 5 o'Clock in the Morning, to 7 in the Evening picked, carded, & spun [a large amount] of Cotton Wool...and of Flax...The next Day, & for several succeeding Days; others as well affected [by]...the Cause of Liberty & Industry, but who could not leave their Families to join their Sisters on the Said Day, sent in their yarn spun out of their own Materials.

July 16. --- Newport. July 10. We can assure the Public, that Spinning is so much encouraged among us, that a Lady in Town, who is in very affluent Circumstances, & who is between 70 & 80 years of Age, has within about three Weeks become a very good Spinner, though she never spun a Thread in her Life before. Thus has the Love of Liberty & dread of Tyranny, kindled in the Breast of old & young, a glorious Flame, which will eminently distinguish the fair Sex of the present Time through far distant Ages.

When the war started, the shortage of textiles became a serious problem. Keeping Washington's troops supplied with blankets & clothing was problematic throughout the war & limited the army's efforts. The people at home didn't have much either but sent what they could spare to support the war effort.

British General Howe knew that “linen & woolen goods were much wanted by the Rebels.” Hence, when his army prepared to evacuate Boston he ordered all such goods to be carried away with them. Thes action encouraged smuggling to remain an important way for European goods & supplies to reach the colonies during the war.