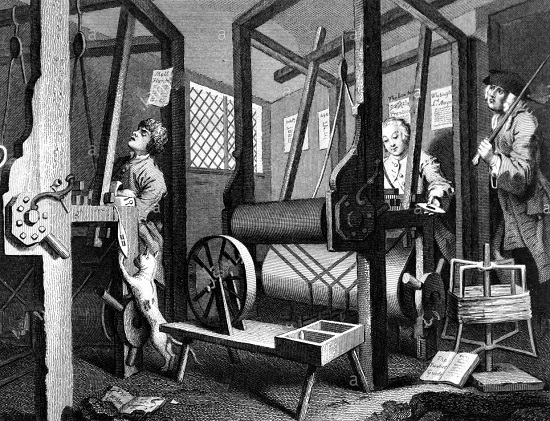 Detail 1749 English Engraving Colonial Williamsburg
Kathy King tells us in her 2006 article in the Quarterly Archives of theTredyffrin Easttown (Pennsylvania) Historical Society that the colonists who sailed from England to "America left a sophisticated manufacturing economy where men, not women, did the weaving. This wasn't always the case. Through the early Middle Ages, women did all phases of textile manufacture. In fact, the word “wife” seems to be etymologically related to the word “weave.” But with the commercial expansion of the late 14C & early 15C, weaving became solely a male occupation. It had a lot to do with the rising strength of guilds. The guilds had strict requirements about who could join & who could weave. Guild regulations & municipal statutes forbade weavers from employing females. Also, the conditions under which an apprentice lived & worked weren't suitable for women, & an apprenticeship was required.

Craft guilds guarded the long-standing craft traditions & carefully governed the entry of workers into their organizations in an effort to sustain reasonable wages & a good standard of work. The women had always participated in spinning & continued to do all the spinning. The formal exclusion of females from the cloth-making & finishing sectors of textile manufacture was an important stricture, with the only exception being that the widow of a weaver could officially take over her husband's work & tools as long as she did not remarry. Laws restricting women from weaving persisted until about 1825.

"There was quite an organized division of labor. Subdividing the work increased productivity by reducing “every man's business to one simple operation.” So, if you purchased a piece of broadcloth 12 yards x 1¾ yards, 15 people probably had a hand in making it, with 5 or 6 people spinning & carding to produce enough to supply the weaver...

"Tradition held in the colonies. Men did the weaving & women did the spinning, with one big difference. There was no organized industry here. Typically, there was a single weaver, with maybe an apprentice or son, working in a small workshop or shed by his house. People in the area would spin their yarn & take it to him to have it woven according to their needs. It was called “bespoke” weaving. Likewise with shoemakers; you brought them your own leather. Unlike urban weavers who might specialize, rural weavers made a variety of linen & woolen goods. Some of the household goods they wove were sheets, towels, blankets, grain bags, & wagon covers."