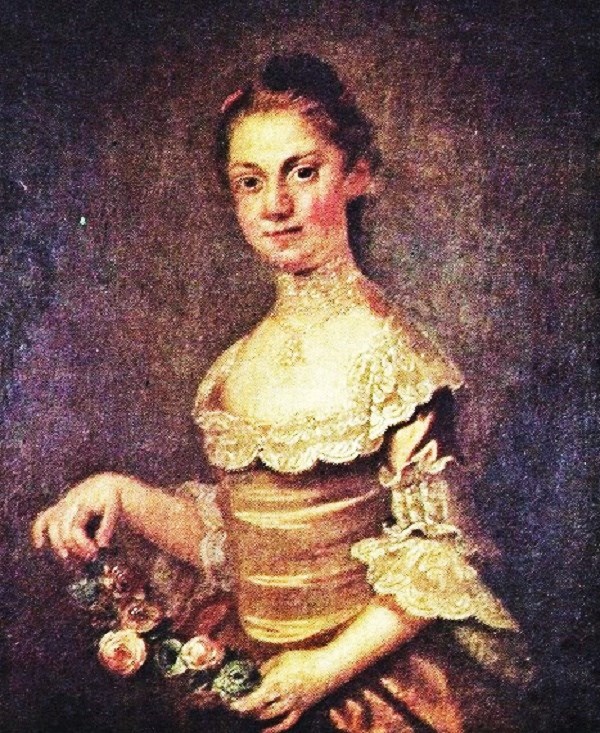 Martha Laurens Ramsay (1759-1811), South Carolina gentry wife & mother & exemplar of dutiful womanhood, was born in Charleston.  Her posthumous memoir, edited & expanded by her husband, was published in 1812, as a model for American women, especially mothers, in the 19C.  A perfect guide for Republican Motherhood.

Her father, Henry Laurens, was of French Huguenot descent, the grandson of Andre’ Laurens, a saddler, who had arrived in Carolina during the 1690’s.  Her mother was Eleanor Ball, daughter of Elias Ball, a planter, who had come from Devonshire, England.  Active in the rice & slave trades after 1747, Henry Laurens had accumulated one of the largest Carolina fortunes by 1762, when he turned planter, buying plantations totaling some 20,000 acres & preparing to live off his wealth invested in land & slaves. Martha was the 5th daughter & the 8th of his 13 children.  As a child Martha Laurens demonstrated great eagerness for learning. She could read easily at age 3 & soon learned French, English grammar, geography, arithmetic, & some geometry.  Her father approved of her studious habits but cautioned her that a knowledge of housewifery was the 1st requisite in female education.  In her 12th year she “began to be the subject of serious religious impressions.”

By the time of their mother’s death in 1770, however, only 5 children survived.  Martha herself, it is said, was thought to have succumbed to smallpox as a baby & had been laid out for burial when an ocean breeze revived her. After her mother’s death, her upbringing fell largely to her aunt & uncle, Mary & James Laurens.  Left in their care in 1771, along with a younger sister, when her father took her brothers abroad for schooling, she lived with them for 11 years, at first in Charleston, & then abroad, where James Laurens had gone for his health.  They spent several years in England, from 1775 to 1778, & then went to live at Vigan in the south of France.  Much of this time Martha served as nurse for her ailing uncle.

She continued an earnest course of reading. She studied botany. She studied religion as she dipped into the Archbishop of Cambray’s Dissertation on Pure Love; committed most of Edward Young’s Night Thoughts to memory; & learned to sing Dr. Isaac Watts’ “divine songs” by heart. First came the Bible & then the old divines of the 17C & 18C, especially Philip Doddridge; in divinity, her husband later wrote approvingly, she read “much of what was practical, but rarely looked into any thing that was controversial.”  Of historians she knew Plutarch, Charles Rollin, & William Robertson; of philosophy, not more that Locke’s Essay on Human Understanding.  She read the modern English & French works of genius, taste, & imagination.  Education & religion remained her twin concerns, for when her uncle willed her 500 guineas, she provided for the distribution of Bibles to the people of Vigan & then set up a school for the young there, which she endowed with a teacher.

In the fall of 1782, to her great joy, her father joined them in France, after his service as president of the Continental Congress, diplomat, & prisoner of war.  Though reluctant to leave her dying uncle, she considered at this point marrying a French suitor (a M. de Vernes), but her father thought him an aged fortune hunter, & in obedience she gave up the match.  She spent most of 1783 & 1784 with her father, who hoped to cure his gout at Bath.  Laurens sailed home in the summer of 1784; Martha & her sister followed early in 1785.

Her father’s ill health brought Martha in touch with the Charleston physician David Rumsay (1749-1815), a former member of the Continental Congress; & on Jan. 23, 1787, she became his 3rd wife.  Her father would have approved. With her husband in the state legislature, her sister married to another public figure, Charles Pinckney, & her brother Henry to a daughter of John Rutledge, Martha Ramsay lived in the center of public affairs.  It was, however, in the private sphere that she excelled.  She believed that a woman’s proper role was to provide strength for the man in her life to perform on that public stage.

Martha Ramsay had read Rousseau of the care of the young, but she preferred the teachings of Locke & the Presbyterian divine Dr. John Witherspoon, combined with “the prudent use of the rod.”  She taught herself Latin & Greek, so that she could educate her sons, whom she prepared for college.  She home-schooled her female children & “carried her daughters at home through the several studies taught in boarding schools.”  Her children learned to read their Bibles in conjunction with Mrs. Sarah Trimmer’s prints of scripture history; Watts’ short view of the whole scripture history; & later Newton on the prophecies.

Mrs. Ramsay had grown up in the Church of England, of which her father was an active communicant.  Her private “covenant with God,” 1st made at the age of 14, she renewed many times.  All of her children, with one exception, received baptism publicly.  Her deep commitment to religion was important, but it was not a commitment to any one denomination.  A quotation appended to her memoirs by David Ramsay reflects the views of husband & wife:  “The experimental part of religion has generally a greater influence than its theory.”  Through persons such as the countess of Huntingdon, whom she knew, & other figures in England’s evangelical revival, she adopted evangelical views; & through the influence of the Charleston ministers William Hollinshead & Isaac Stockton Keith, she became & remained a member of the Congregation Church.  But her religion was always “the warm, vital, active, unaffected religion of the Bible.”  She died in Charleston in 1811, at the age of 51, & was buried in the Congregational churchyard there.

Her historical importance rests primarily upon her husband’s publishing her brief memoirs as the Memories of the Life of Martha Laurens Ramsay.  They were published the year after her death, sold widely, & portrayed her as a model of proper womanhood in a new & growing nation.  She had read Mary Wollstonecraft’s fiery Vindication of the Rights of Woman, but “in conformity to the positive declarations of holy writ” she “yielded all pretensions” to equality with men.  Her highest ambition was to embody Christianity's ideals through all crises, including death, a conviction that characterized her entire approach to life, domestic & political.
Memoirs of the life of Martha Laurens Ramsay, who died in Charleston, S. C., on the 10th of June, 1811... With an appendix, containing extracts from her diary, letters, and other private papers. And also from letters written to her, by her father, Henry Laurens, 1771-1776
by Ramsay, Martha Laurens, 1759-1811; Ramsay, David, 1749-1815; Laurens, Henry, 1724-1792