Tea Drinking Moves to the Masses - 2 Preachers write that some 18C Farm Women served Tea. Some didn't, but times were changing... 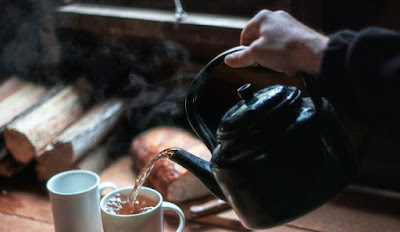 Before British taxation efforts & the American Revolution politicized tea, the acquisition of new domestic equipment for serving this hot beverage & the display of genteel behavior when drinking it had come to signal social know-how & refinement among colonists, especially the women. Although the casual perusal of travel journals, letters, diaries, & other personal writings from the period might suggest that tea drinking almost immediately became widespread throughout the colonies, further examination reveals different patterns of consumption at various times & within differing populations.

Around 1750, Israel Acrelius (1714-1800) asserted in his history of the Swedish settlement on the Delaware River that “tea, coffee, & chocolate are so general as to be found in the most remote cabins, if not for daily use, yet for visitors, mixed with Muscovado [a partially refined sugar].”  Israel Acrelius was a Swedish Lutheran missionary & priest. Beginning in 1749, Acrelius took a post in Wilmington, Delaware, site of a Swedish Lutheran congregation. He returned to Sweden in 1756 & in 1759, he published his History of New Sweden, which dealt with the religious & secular history of the area. This book was translated into English by William Morton Reynolds, who learnt Swedish for the purpose, & published in 1874.

The Virginian Devereaux Jarratt (1733-1801) presented a different picture, however, when he reminisced about his childhood in the 1740s: "Our food was altogether the produce of the farm, or plantation except a little sugar, which was rarely used. We made no use of tea or coffee for breakfast, or at any other time; nor did I know a single family that made any use of them…. I suppose the richer sort might make use of those & other luxuries, but to such people I had no access. We were accustomed to look upon, what were cdlcd gentle folks, as beings of a superior order." Jarratt was the rector of Bath Parish in Dinwiddie County & one of the most influential evangelical leaders in Virginia’s Anglican Church whose autobiography, The Life of the Reverend Devereux Jarratt, was published in Baltimore, Maryland, in 1806.

Evidence of African American tea use & tea ware. When Jullian Ursyn Niemcewicz from Poland visited Mount Vernon in 1797, he wrote: "We entered one of the huts of the blacks, for one can not call them by the name of houses. They are more miserable than the most miserable of the cottages of our peasants. The husband & wife sleep on a mean pallet, the children on the ground; a very bad fireplace, some utensils for cooking, but in the middle of this poverty some cups & a teapot." Julian Ursyn Niemcewicz (1758-1841) was a Polish author & statesman. His Under Their Vine And Fig Tree. Travels through America in 1797-1799, was published in 1805. It is reported that a few African American potters were sufficiently familiar with tea wares to copy European shapes in ordinary earthenware.

While tea, tea wares, & social tea drinking were important in the 18C, they were not universal. Wealthy families in America initially began to serve tea on social occasions. They bought significant quantities of equipment & usually used it according to earlier precise British rules of conduct & performance. About 1750, however, colonials with less money began to set their social ambitions & took advantage of the tea wares that producers were supplying in many materials & designs & at a wide range of price levels.

As the century progressed, innovations in ceramic production further expanded the range of available wares in terms of price & appearance. Poorer customers with limited amounts of cash or credit could participate in the growing consumer revolution. A major transformation in both demand & production was well underway by the middle of the 18C. Gradually ordinary people assumed the right to spend a little money to express & show off their personal taste.

See: Determining The Growth And Distribution Of Tea Drinking In Eighteenth-Century America

See: Rodris Roth, Tea Drinking in 18th-Century America: Its Etiquette & Equipage. (Washington, D.C.: Smithsonian Institution, 1961). This excellent book by Rodris Roth that can be found online in its entirety at Project Gutenberg.
Posted by Barbara Wells Sarudy at 4:00 AM