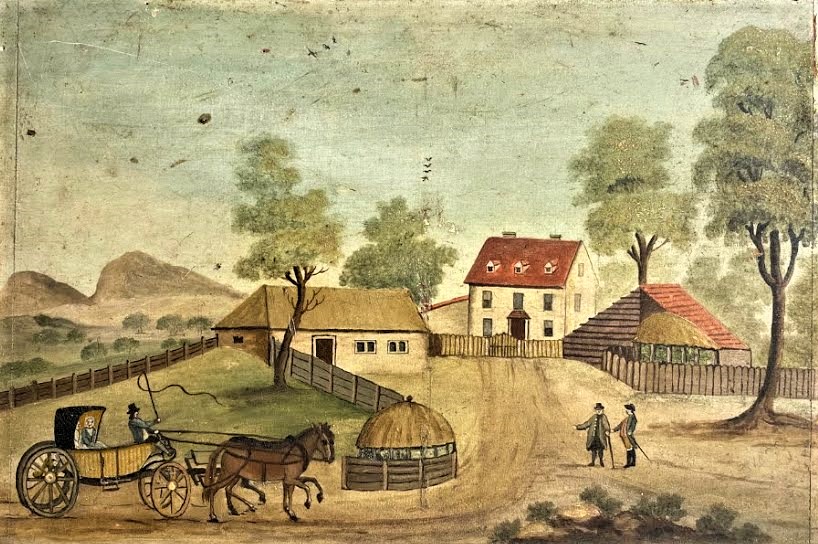 Lehigh Valley, Pennsylvania - Home of Anna Kliest. Moravian Historical Society
Anna Rosina Kliest Gambold (1762-1821) was born in Bethlehem, Pennsylvania in 1762. She is often remembered by her contributions to the Moravarian Missions & her relationship to the Cherokee Nation, however, her love & contributions to the early botanical field should not go unnoticed.
She was born to Daniel Klioest who had arrived, as a single man, from London in May of 1749. In 1756, he was listed as a widower in 1756 & then remarried to 1757 to Anne Felicitas Schuster who is believed to be Anna Rosina Kliest's mother. Daniel died in 1762 & Anna Rosina's mother died in 1765.
There is little record of Anna's early life, though a record of her only education can be seen. Anna Rosina was then placed into the Moravian Single Sisters house in 1766 & stayed there until 1777, when she was 15 years old.
After her education, she served as a teacher for the Seminary School in Bethlehem where she began to teach art classes & later science courses. It is was at the school both that she extended her love of nature & botany to her students, but also used the schools vast library to continue her own education in botany.
William Corniuels Reichel (1824-1876), though he was born after Anna's death, was able to complete interviews with students who had Anna as a teacher during her time at the School. He notes her love for nature & her nurturing spirit to pass this wisdom to her students by saying "As she walked out into the fields, she taught her joyous flock the lessons of wisdom from the great book of nature spread before them. The flowers, the trees, the stones, the clouds, the stars....she would have her pupils retain, in a happy manner, leading them unconsciously into the secrets of science by practical & familiar illustration". (Daniel. McKinley, Anna Rosina (Kliest) Gambold (1762-1821) Moravian Missionary to the Cherokees, With a Special Reference to her Botanical Interests).
In 1803, she left her teaching position by invitation of Bishop George Loskiel (1740-1814) to accompany him & his wife to Moravian missions in Ohio. Loskiel had become the Historian of the Missions in North America & needed to travel to different missions to survey them. This particular mission, he invited Anna to attend as his diarist & secretary. This position gave Anna both a taste of missionary work but also of the world around her.
1805 proved a busy year for Anna's life. She arrived at Nazareth in May of 1805, & was noted to have been recently engaged to Brother John Gamold, who was from Salem. John Gamold (1760-1827) is suspected to be the son of Hector Gambold who was married, Eleanor Gregg. Records of John's parents are limited, though they had 6 children. John was born in Shechem, New York, & was brought to Nazareth, PA to get his education. In 1773, he traveled to Bethlehem to learn his trade which would then take him back to Nazareth.
By 1785, he had returned to Bethlehem to become the warden of the Bretehn's House, likely where he had heard of or met Anna. However, their paths were not destined for each other yet, as he traveled to Spingplace, GA in 1802 then to Friedberg, North Carolina to be a pastor. In 1805, he was directed to join the Springplace Missionary in GA. Before leaving, Anna & John were married & traveled to Springplace together. Springplace would become their home & the home to a majority of Anna's botanical work.
In 1801, a group of Moravian missionaries from Winston-Salem, N.C., started a mission and soon after, a boarding school in Springplace or Spring Place, Murray County, Georgia, This made the Vann plantation home to the first European-style school and Christian mission on Cherokee land.
Gambold was a farmer, teacher, missionary and published botanist. In March 1819, Gambold wrote an article for the American Journal of Science and Arts, cataloging flowers found along the nearby Conasauga River by their scientific name, with the plants' uses in Cherokee medicine and culture.
Their work at Springplace was to establish a school & relationship with Cherokee tribes. Her missionary work also coincided with her botanical work. Anna worked alongside many other Morvavians & botanical enthusiasts by growing, drying, documenting & sending her plants to others. In 1817,  Elias Cornelius visited Springplace & noted the vastness of her gardens noting that "Mrs. G is quite the Botanist, & has a very good garden of plants, both ornamental & medicinal."
Sometime after this tour, Cornelius asked Anna to document the plants along the river which is how her first paper was published. In 1819, her article that examined flowers along the Conasauga River & their uses in Cherokee medicine was published in the American Journal of Science & Arts.
Her contributions to botany also helped Henry Muhlenberg (1711-1787) who was a Moravian botanist minister. In his 1813 work Catalogus Plantarum Americae Septentrionalis, he dutifully thanked her for her contributions of seeds & specimens to his work. She also contributed to his 1817 posthumous work, Descriptio Uberior Gramminum et Plantarum Calamariaum Americae Septentrinalis, in which she supplied 25 specifies of plants for him to study.
After she married John Gambold in 1805, the couple moved  to Springplace, Georgia to evangelize among the Cherokee people. In Springplace the couple established a school. They were, however, hampered in their efforts at missionary work by the complexities of the Cherokee language. Eventually, as part of the removal of the Cherokee from their ancestral lands, the mission was shuttered by the government of the United States.
Anna & her husband were part of the Moravian Mission at Spring Place, Georgia until Anna's death. The day before her death, after being ill for quite some time, she walked into her garden & enjoyed her plants bringing to spring up one more time. She died in Springplace in 1821 & is buried on the Vann plantation in God's Acre Cemetery.
Among the Moravians in Springplace, Sister Anna Rosina Kliest Gambold, wife of Brother Joseph Gambold, was the main author of the Springplace Mission Diaries from 1804-1821. These diaries aid in understanding Cherokee culture & history during the early 19C & Moravian missionary efforts in the South during this time.
Posted by Barbara Wells Sarudy at 4:00 AM