One of the Earliest Paintings of an American Drinking Tea 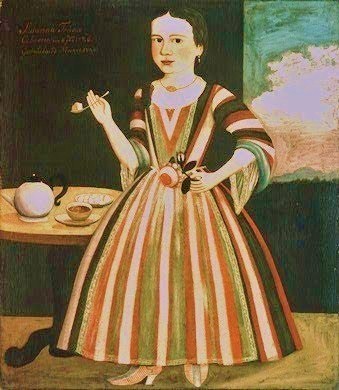 Susanna Truax Drinking tea in the British American colonies, Gansevoort Limner, possibly Pieter Vanderlyn 1687-1778.
Historian Barbara Carson tells us that Direct and regular shipments of tea from China began in 1717 (Chaudhuri 1978,388). Shortly thereafter, British artists depicted elite and middle-class families gathered around tea tables...For the American colonies, however, visual depictions of tea equipment are rare. The earliest, dated around 1730, is a portrait from New York of Susanna Truax at the age of about four. This painting, attributed to the artist known as the "Gansevoort Limner," possibly Pieter Vanderlyn, reflects the early presence of the Dutch in New York. The Dutch were in fact among the first to bring tea to North America. In the painting, the young girl is shown standing beside a tea table. A small teapot rests on a protective stand or pad with a cup and saucer and a sugar dish nearby. Susanna, who seems to be eating sugar with a spoon, drank her tea with a minimum of equipment.
See: "Determining The Growth And Distribution Of Tea Drinking In 18C America" by Barbara G. Carson (1941-2011)
Posted by Barbara Wells Sarudy at 4:00 AM