Taking Wine & Tea on a 1754 Picnic while Fishing on the River in Annapolis, Maryland

Fishing in the British American colonies was a social sport, & the outcome was as unpredictable then as it is nowadays. This poem appeared in the 1754 Maryland Gazette about preparing a list of items to take on a picnic & fishing trip on the Severn River in Annapolis. 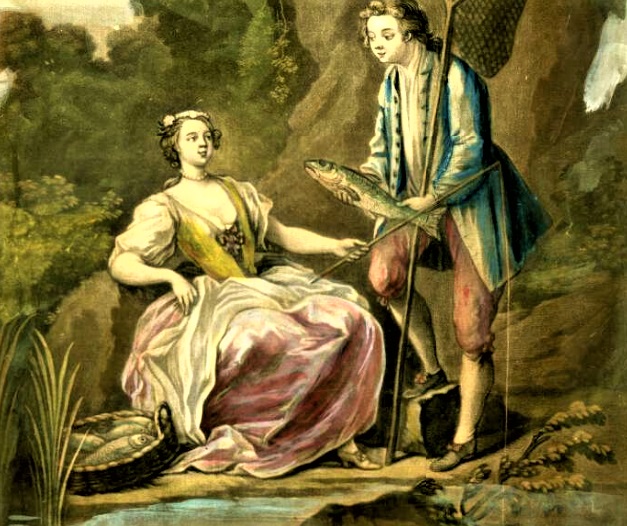 1730s-40s  Print by John Simon, After Jacopo Amigoni, Published by Thomas Burfordi.
Six bottle of wine, right old, good and clear;
a dozen at least, of English strong Beer:
Six quarts of good Rum, to make Punch and Grogg
(the latter a Drink that’s now much vogue)
some Cyder, if sweet, would not be amiss:
Of Butter Six pounds, we can’t do with less.

A tea Kettle, Tea, and all the Tea Geer,
To treat the Ladies and also small Beer.
Sugar, Lemons, a Strainer, likewise a Spoon;
Two China Bowls to drink out of at Noon:
A large piece of Cheese, a Table Cloth too,
A sauce-pan, two Dishes, and a Corkscrew:
Some Plates, Knives and Forks, Fish Kettle or pot,
And pipes and Tobacco must not be forgot:
A frying pan, Bacon or Lard for to Fry:
a tumbler and Glass to use when we’re dry
A hatchet, some Matches, a Steel and a Flint,
Some touch-wood, or Box with good tinder in’t.
some vinegar, Salt, some Parsley and Bread
or else Loaves of Pone to eat in it’s stead:
and for fear of bad Luck at catching of Fish
Suppose we should carry- A READY DRESSED DISH 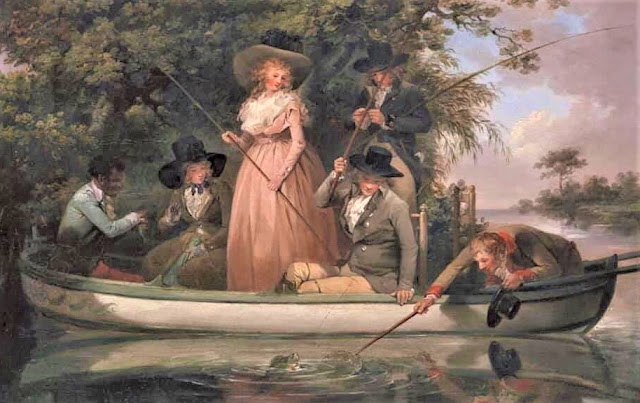 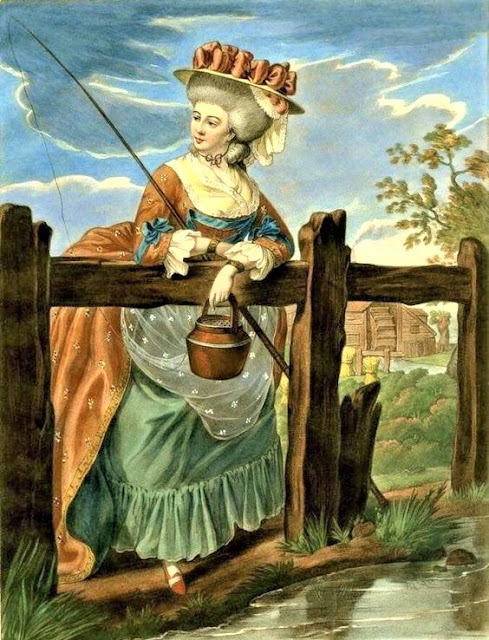 18C Lady Fishing in August
Posted by Barbara Wells Sarudy at 4:00 AM